Josie Baff (right) is airborne on her way to winning a snowboard cross gold medal at the Winter Youth Olympics. Photo: Supplied.

It was just a split-second decision by Jindabyne teenager Josie Baff that delivered Australia its first gold medal at the Winter Youth Olympics in January this year.

The 17-year-old’s triumphant feat in the final of the women’s snowboard cross at the 2020 event in Lausanne, Switzerland, on January 20, left spectators awestruck as the four finalists zigzagged their way through the course, and the first three threw themselves at the finish line. Just 0.05 seconds separated the gold medal and silver medal, and 0.50 seconds between silver and bronze.

Sitting in third place and travelling at speeds of up to 100km per hour, Baff saw her opportunity.

“As I gained speed, I moved into second [place],” she tells About Regional. “The girl who beat me in the first event did the exact same thing which didn’t work for me the first time when I tried to overtake her so I tried the only other option and it worked – I overtook her into first.

“I thought, ‘Oh my God, what the hell? How is this happening right now?’ and I just kept going down. I could hear people behind me … then towards the finish I could hear someone hot on my tail. I was just thinking, ‘Oh my god.'”

Baff crossed the line ahead of second-placed Margaux Herpin of France and Swiss favourite Anouk Doerig in third.

Because the finish was so tight, Baff says she didn’t know she’d won gold until she saw her name on the board.

“I crossed the finish line and was in disbelief,” she says. “I was like, ‘Holy crap, that just happened!’ I looked up and saw my name at the top and started hugging everyone. It was very emotional.”

Following the race, a ceremony saw Baff presented with a cuddly toy of Lausanne 2020 Winter Youth Olympics mascot Yodli. The official medal ceremony then came at Medal Plaza in the Flon district of the Swiss city.

“There were so many Aussies, it was really cool,” she says, “But it was surreal, too. I’d seen all my idols in the past getting their gold, and the national anthem playing. I just thought, “Oh my god, now it’s me getting gold, this is my national anthem. It was so crazy and emotional.” 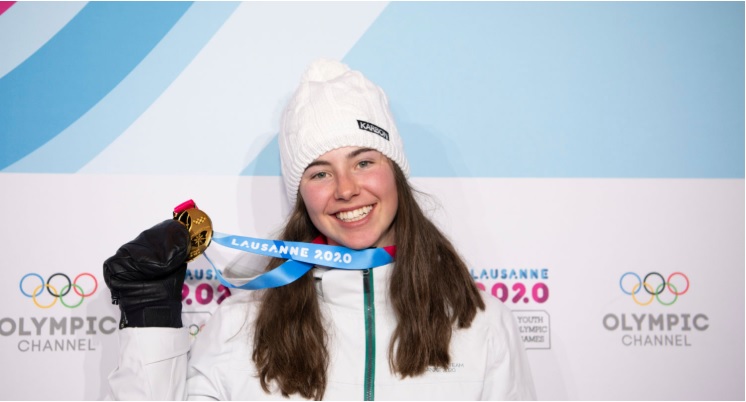 Winning four out of five heats during the Winter Youth Olympics campaign, and then finishing first in the eight-person semifinal, Baff was in a positive mindset heading into the decider.

She had arrived in Lausanne after winning bronze while competing against more experienced snowboarders at the European Cup in France. A visit to the Olympic Museum in Lausanne only solidified her medal dreams.

The daughter of a snowboard coach and ski instructor, Baff was practically born with snow on her feet as the family moved between snowboard camps in the US and Australia. She was up on skis when she was two and snowboarding at five. Competition soon followed.

“I remember I wrote down my goals when I was 11,” she recalls. “They were to win a medal either skiing or snowboarding.

“After winning [bronze] at the Europa Cup, I had a bit more confidence coming into Lausanne that maybe I am better than I thought I was. But I didn’t think it could actually happen.”

Now back home in Jindabyne, Baff is focused on her HSC studies. But her gold medal and framed Olympic bib are constant reminders of her achievement in Switzerland.

“I had the medal sitting in its open case for a while so I could look at it,” she says. “But it was starting to get dusty so I had to close the case.”

Her next goal on the slopes is qualifying for the Australian Winter Olympics team bound for Beijing in 2022. Fellow regional athlete, Young’s Jasper Cobcroft, is also hoping to be there competing at the Games in China in two years’ time.

Robyn Jones - 25 minutes ago
Where is it located View
Monica Tiffen - 49 minutes ago
I find it hard to put a light-bulb in!!!!! View
Michelle Langsam - 4 hours ago
Lucy Baker. For any of your tribe ? How cool is this View
News 4

David Graham - 43 minutes ago
Is it on stalled or installed? View
Russell Nankervis - 7 hours ago
As if students could afford an apartment that close to the Parliamentary triangle View
Community 42

Peter Major - 1 hour ago
Hugo Young Ride in single file and comply with ALL road rules, do not impede the flow of traffic and there are minimal proble... View
Kirby Haines - 2 hours ago
lol sure, costs 10x in admin what it would recover in revenue. Where do you draw the line? Are you going to insist some gorml... View
Hugo Young - 3 hours ago
Adam Jovanovic I'll be sure to suggest to my cycling club that we start running groups rides on paths. A group of 15 people t... View
Opinion 53

Warren Brown - 5 hours ago
What a true grub ! View
Gulf Mike - 8 hours ago
Ted Bell Don’t believe everything you read (especially in the media). View
Opinion 155