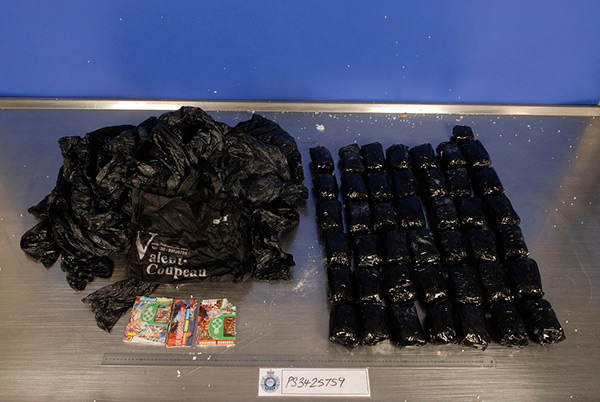 A joint operation between ACT Policing, Australian Federal Police (AFP) Crime Operations and the Australian Border Force (ABF) has resulted in the arrest of a 32-year-old Nigerian national and seizure of approximately 10 kilograms of methamphetamine imported into Australia from China.

Operational activity commenced on 8 October 2015 when a consignment was examined by ABF officers in Sydney. The consignment contained three statues and the examination located an estimated 10 kilograms of methamphetamine (also known as ice) concealed in one of the statues.

The drugs, which had a potential street value of $10 million, were seized and an investigation commenced.

The consignment was destined for the Canberra suburb of Kaleen. ACT Policing’s Criminal Investigations, Drug and Organised Crime Team took control of the consignment from AFP Crime Operations officers in Sydney and on 16 October 2015, commenced a controlled delivery. After delivery to a residential address in Kaleen, the three statues in the consignment were collected by the Nigerian national and driven to a second address in Kaleen before being opened. The packages were removed from the statue.

On 17 October 2015, ACT Policing arrested a man at the Jolimont Centre in Canberra, when he tried to board a bus to Sydney. The man had in his possession the packages that had been removed from the statue.

The 32-year-old man had arrived in Australia in July this year on a student visa.

A search warrant was executed on a house in Kaleen where similar packaging and statues were located. AFP Forensics examined the premises and ACT Policing’s Criminal Investigations seized a vehicle as a tainted criminal asset.

“We continue to work closely with our partners to prevent this destructive drug reaching our streets,” Commander Quinn said.

The 32-year-old man is due to appear before the ACT Magistrates Court on Monday (19 October 2015) where he will be charged with attempting to possess a commercial quantity of an unlawfully imported border controlled drug, namely methamphetamine, contrary to section 307.5 of the Criminal Code Act 1995 (Cth).

The maximum penalty for this offence is life imprisonment.

“The 32-year-old man had arrived in Australia in July this year on a student visa.”
Yeah, right!

Fraser Grocer - 12 minutes ago
Hi Gassed There will be seeds, seedlings, pods, sauces, rubs, salts, sweets, challenges and more in the store. View
Gassed - 18 hours ago
Shame I thought they were going to sell actual chilli's not just sauces... View
Food & Wine 12

Ivana Ryan - 14 minutes ago
Toasted sandwich and a coffee 😋 Bojana Simic View
Christopher Rompotis - 1 hour ago
Hannah next brunch catch up? 🤔 View
Nicolas Normandeau - 10 hours ago
Matilda Jones I need this in my life. This sounds so good!... View
News 21

chewy14 - 18 minutes ago
Capital Retro, You're partially correct but not in the way you think. The SA battery has been so successful simply because th... View
David Wagner - 26 minutes ago
I like it, but why not look at biogas using sewage plants eg. Europe or Stirling engines or ........ View
Capital Retro - 11 hours ago
You know what windfall means? Take that away and the venture has probably lost money. Gas peakers all over Australia would ha... View
Opinion 1

Capital Retro - 1 hour ago
They were introduced and approved by the virtue signally government you voted for, Zoya so suck it up. View
News 1

chewy14 - 18 hours ago
The solution to this is simple. Instead of building more public housing, the government should divest itself of almost all of... View
Food & Wine 50