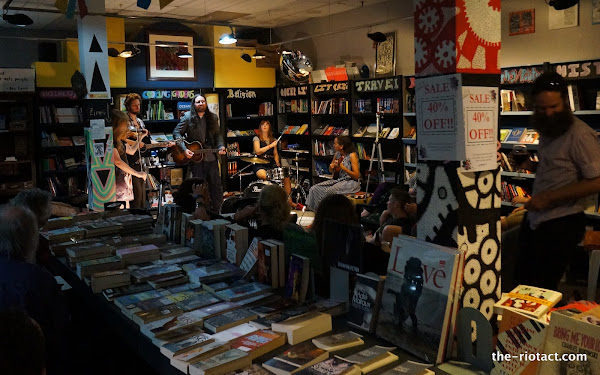 Jorian Gardner and Domenic Mico, the minds behind the gone-but-not-forgotten Multicultural Fringe Festival have taken the reins of Smith’s Alternative They are closing the doors for a bit to begin the process of gutting and rebuilding Smith’s with an eye to making it a more dedicated theatre/event space.

The book store will still run, albeit with a smaller selection. The store will now have a stronger focus on being a venue. Jorian has said that he hasn’t released a program yet, but did promise regular comedy, poetry, music, and burlesque nights. The always fabulous April’s Caravan will also be selling its wares there.

While it’s sad to think that most of those lovely books will be disappearing this done make sense. It occurs to me that I’ve never actually bought a book from Smith’s, but I have been to a great number of wonderful arts events and drunk quite a few beers there. Jorian and Domenic seem to be changing Smith’s to better fit what it has already become, a great place to see a show and share a drink in the afternoon, and maybe buy a book.

The store is set to re-open in the last week of April. I’ll see you guys there.

Since when is it gone, it was a part of the multicultural festival this year?

yes, but we’ve forgotten that…

Since when is it gone, it was a part of the multicultural festival this year?

When Jorian is mentioned as becoming involved with a bookshop, why do I suddenly picture Bernard from “Black Books”?

Bernard without the talent or the ability. Lets see how long Mr Gardner can keep this afloat shall we? Going off his previous record Smiths will be a Starbucks before too long.

This town needs people like Jorian, much as most people would be loath to admit it.

When Jorian is mentioned as becoming involved with a bookshop, why do I suddenly picture Bernard from “Black Books”?

If you’re going to mis-use apostrophes, at least be consistent.

“Jorian has said that he hasn’t released a program yet, but did promise regular comedy, poetry, music, and burlesque nights.”

Looking forward to it opening.

“While it’s sad to think that most of those lovely books will be disappearing this does make sense.” – +1 – of the remaining bookshops in Canberra, Smith’s actual/potential customers are probably the most likely to get their books from internet booksellers, or go for e-books, so this may be a better use of the space. I really hope it works for them – Book Lore and Tilley’s at Lyneham is a good combination, Beyond Q at Curtin has a cafe and some live entertainment, and Canty’s at Fyshwick have coffee and eateries nearby (but as to entertainment, ahem).

Annie Wyer - 46 minutes ago
Mark Ryan actually no, I don’t. But it sounds like you’re a liberal voter who hates contributing towards the common good,... View
Margaret Freemantle - 1 hour ago
Got to be kidding to vote Libs in Canberra!! View
Mark Ryan - 4 hours ago
Annie Wyer sounds like you know someone who got let go from an over inflated over funded lazy parks n gardens service. Vital... View
News 4

Vicky Gregory - 1 hour ago
Why didn’t they look at the Qld model? Thousands of apartments on the Gold Coast , why be different? View
Nathan Giannasca - 2 hours ago
20yrs to late! View
k452 - 3 hours ago
You can read the debate by logging into the ACT Parliament website. I'm not sure when it was debated but there were sittings... View
News 12

Bella Twine - 2 hours ago
i should hope not its not humane ot legal to bury living people. View
Phil Andrews - 3 hours ago
Or anybody living outside the 10km radius Michael Ward 🤣 View
News 14

@The_RiotACT @The_RiotACT
From an all-local lineup bushfire benefit show to Abbey Road Live, here are the gigs worth catching in #Canberra this week https://t.co/ga0VbqGlcI (54 minutes ago)