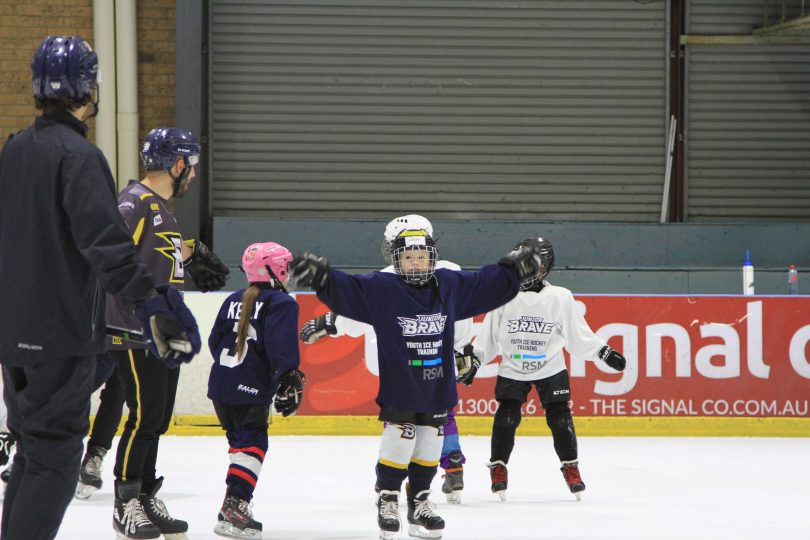 Kids had the chance to play and train with their idols from the CBR Brave. Photos: Region Media.

Following two spectacular seasons when the Canberra Braves broke points, wins and winning streak records in the Australian Ice Hockey League, the club set its sights on nurturing the next generation of stars with ‘Train with the Brave’ summer sessions to help develop new talent in the ACT.

The program provided a great opportunity for registered junior players (aged 5 to 16) to access specialised off-season training with their idols from the CBR Brave and CBR Brave coaching staff.

Head of the Junior Brave Mark Rummukainen said it’s opportunities like this that can help junior players develop faster.

“We noticed that there is a lot of talent in Canberra and when we started the Brave I had a vision to help harbour that talent and develop it,” he told Region Media.

“I want to get the kids more ice time, more training and do whatever I can to help them improve and realise the potential I can see they have.

“All their skills are getting better, but skating is what we want to hammer down the most.”

However, time on the ice has been a problem in the past, Mark says.

“The limited availability of ice time has been a bit of a handbrake for the kids. We need to get them out on the ice a bit more, up the intensity of practice a bit, and expose them to different voices and ideas from people who have been there and done it.

“We have a lot of different guys from the Brave, giving them different ideas and tips about different skills.

“I can see they are taking that on board and it is important to get different voices. In the eight sessions we have had I have seen the kids develop their fundamental skills to a higher level and it has been great.”

While time on the ice can be hard to come across in Canberra, RSM came to the rescue this year.

Business advisory national project manager Michelle van Lier said the business jumped at the opportunity to sponsor the program because of the family values that both organisations share. 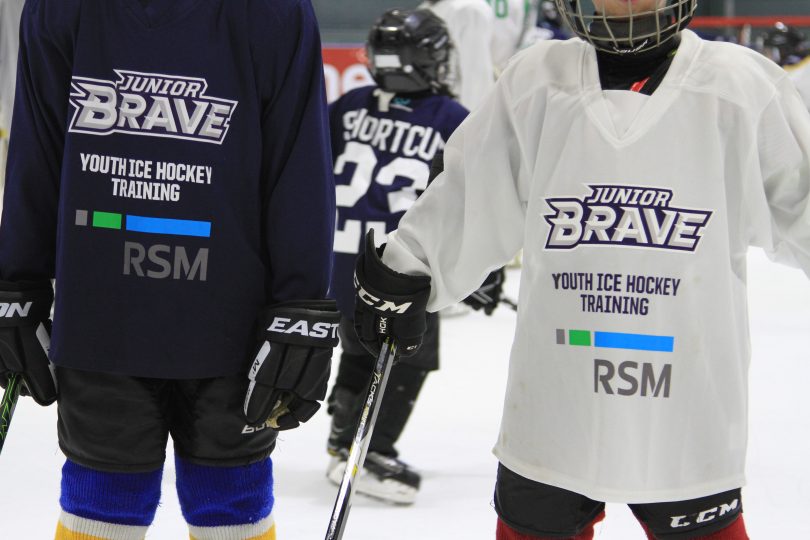 All the kids were presented with their very own Junior Brave jerseys at the end of the program.

“It is that family culture that we experience at RSM as well; we do feel like a big family through the Calvary and Brave organisation, down through to the players. The players are really inclusive and very open with their time.

“It is really rare and it is amazing to see the Brave players here with the Junior development players. It is that sense of everyone belonging and that sense of inclusion that RSM feels really strongly about.”

By covering the facility costs of the program, RSM helped parents bring their kids to the rink even when purse strings were getting tight just before Christmas.

“We provided assistance so the players’ parents don’t have to continually dig deeper and deeper into their pockets, especially for these summer sessions coming up to Christmas. The last thing we want is to put strain on family purse strings.

“RSM is very strong in its support of the local community.”

And as Michelle found out, while her own daughter loves going along to watch the Brave, the game is just as compelling for the adults.

“We started with a small contingent of four coming to the first game, and after that I think we upped it to 10 because there was just so much interest, the sport is just so addictive.

“All the clients we bring along absolutely love it.”

Mark, whose own son and nephew were a part of this program, is also encouraging everyone to get involved and perhaps try something new.

“It is a fast, fun game. It is very skilled, and getting to coach the kids I see how they develop skills very quickly and their confidence grows massively,” he said.

“Get in touch with Ice Hockey ACT about their different development programs and just take it from there. Once they get involved they really fall in love with it and we just want to play a role in developing that even further.”

To learn more about ice hockey in the capital, Ice Hockey ACT, or The Brave.

It’s a bloody excellent program. My daughter will return this year after falling ill just before last season started. 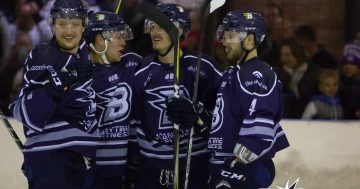