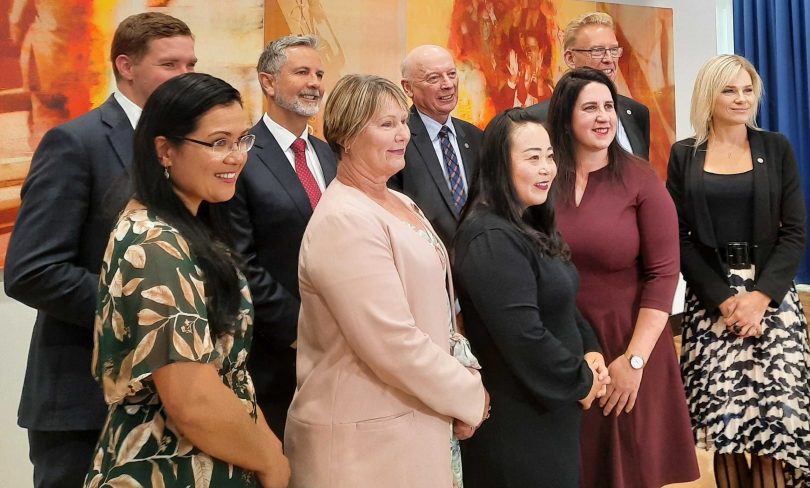 New Canberra Liberals leader Elizabeth Lee had the opportunity last week when she unveiled her new team to draw a line under the party’s election loss but instead it was business as usual.

If you were looking for a new vision or at least a hint that the Liberals had learned the lessons of their defeat, then you would have been disappointed.

All she offered was that the insights of the formal review of the campaign would be taken on board, but she hardly has to wait for that – the reasons why the Liberals are in opposition for the next four years are all too clear.

An incoherent and contradictory economic message, a known arch-conservative as leader and a reliance on stunts and slogans instead of policy depth all contributed to the loss.

Ms Lee is a moderate, she projects a fresh image and is smart and articulate enough to do the job, so why did she fall back on tired party lines and defensive postures when she could have pointed to the way ahead?

Perhaps she did not want to say too much with her former leader standing behind. Maybe with four years till the next election, she believes there is plenty of time to steer the party to a competitive position.

But after such a disastrous result she needed to give the 34 per cent of the electorate who voted for the Liberals and those who drifted away but would like to come back something to take away from the event.

The questions were predictable. Will there be a change in economic and tax policy? Will the Liberals still be talking about rates for the next four years? What about climate change, and inevitably, is the party finally on board 100 per cent with light rail to Woden?

Tax reform would be one of many issues the review would look at, but cost of living would remain a priority for the Liberals, she responded.

”The Canberra Liberals will unapologetically and unashamedly always continue to fight for those Canberrans who seem to be forgotten, sidelined and abandoned by this Labor-Greens government,” Ms Lee said.

Maybe she should start fighting for those who feel forgotten by her own party.

Look at the party’s record on climate change, she bristled, backing 100 per cent renewable electricity sources and the zero net emissions by 2045 goal. No mention of a million trees though. Nor a hint that the party might develop a few ideas of its own beyond a headline.

And, of course, the party backs light rail to Woden, but the government should let everyone know what it will cost, including the consortium it is negotiating with to build the thing.

If the Liberals were in government they would not be revealing its hand either, and by clinging to caveats the Opposition allows the perception to remain that it is only grudgingly supportive.

Ms Lee needs to sound like an alternative Chief Minister not yet another Opposition Leader looking for an excuse to find fault.

She made a virtue of keeping Alistair Coe in the Treasury role, despite him being the architect of the party’s failed economic strategy and the fact that another former leader, Jeremy Hanson, would also play a strong part in her shadow ministry.

It was valued experience she could draw on, she said, although in a reduced team of nine, including two newbies, Ms Lee had little choice or room to manoeuvre.

If its advice she’s after, let’s hope those two former leaders have learnt from their failures.

Eventually, Ms Lee will have to strike her own path. She could have already taken the first step last week, giving notice that the Canberra Liberals are serious about government and willing to move out of its own echo chamber.

The ACT Liberals need to do a LOT more work on the detail of the major policy areas which motivate voters.

Posts and reader comments on this site and other media outlets around the town are a rich source of questioning and criticism of the failings of the ACT Government, but too little of that was reflected in practical, believable policy offerings from the ACT Liberals – which might be a reason why unwelcome questions during the campaign (which could and should have been pushed back with clear, confident arguments) were too often met with hollow, incomplete or seemingly off the cuff responses.

Noting that Canberra is, in socio-economic terms, comparable to inner-urban and middle ring municipalities (although with a somewhat smaller private sector component) in the larger cities, the ACT Liberals might find some useful ideas from centre-right candidates who have succeeded in that world, and likewise, of course from state Liberal parties which have managed to win government – particularly after
lengthy periods of Labor government.

Anyone who is a threat or thinks “differently” is pushed out, withering down their talent pool and ideas. This is why the Canberra Liberals are so empty and unelectable.

Until the Federal LNP stop their mindless opposition to climate mitigation and treating the public as fools these locals have no chance……not matter how inept the local ALP is.

Another Bushnell article bashing the ACT Liberals. What a surprise. Will you fit one per day in this week Ian?
Play another tune.

Oh haven’t you seen the election result yet?

What does that have to do with Bushnell being a one trick pony, and his obsessive harping on about the ACT Liberals every day of the week being tiresome?

How do we want the Liberals to distinguish themselves from Labor/Greens?
We cannot and should not want them to be the same as Labor/Greens.
A democracy is about offering a choice of alternative policies to voters.
No choice = no democracy = a one party state = a variety of evil isms.

Great well change the voters then because clearly they’re the problem.

Nope. Won’t happen. The hard right still controls the party. Same with the feds, any attempt to move towards the centre will be met with howling tantrums.

Lee’s comments were perfect for a new leader coming in.

Basically: “We will review the mistakes made and reshape as needed in coming years.”

There’s 4 years to develop new policy and messaging for the electorate.

Why on earth would you expect a new leader to commit to things that
a. Might come back to bite or
b. Are (despite the author’s protestations) still objectively stupid.

And the point is Zed and all his assistant Voldemorts are still in charge so nothing will change. Roll on to the next loss in 2024.

Food for thought, thanks.