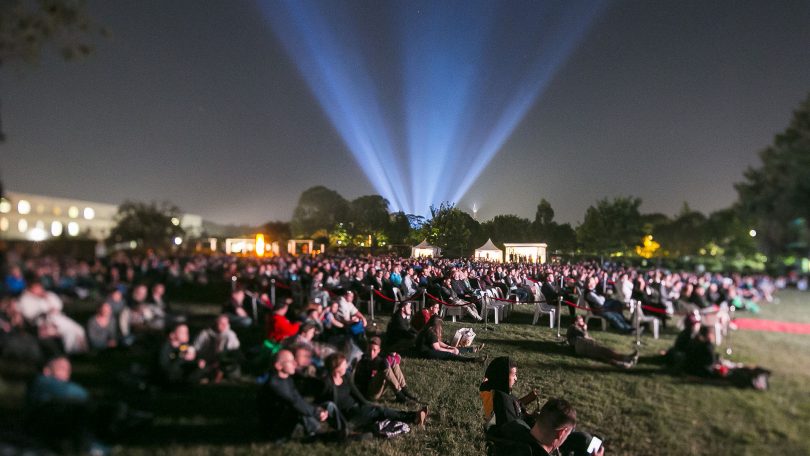 As Enlighten continues to enliven the nation’s capital, aside from pretty projections of colour to behold there are also some exciting injections of cinema to enjoy.

Tonight, head along to the Senate Rose Gardens at the Museum of Australian Democracy to catch the 12 slated short-film finalists in the 15th edition of Lights! Canberra! Action! The award ceremony for the evening’s winners will directly follow. The event opens at 7 pm; screenings begin at 8 pm.

As per the brief of the annual event, filmmakers were only very recently advised of the ten items required to feature in their pieces. Subsequently given a mere ten days to shoot, edit and produce the final product, this evening’s suite of seven-minute films aim to encapsulate the essence of Enlighten: strange, beautiful and unexpected.

The event is free but it is recommended you bring your own chair, picnic rug, and snacks etc. if so desired. Otherwise, fuel up on festival food beforehand or hold out until after the event.

Aside from last night’s free ANU Film Group screening of recent Oscar darling The Shape Of Water (which you can still catch at Dendy Canberra and Palace Cinemas if you missed it!), ANU Enlighten Minds | Thinking Spaces in partnership with the National Film & Sound Archive will be screening two additional features as part of the Enlighten Festival.

Abra Cadabra (1983) is an Australian animated throwback based loosely on the story of the pied piper. Voiced by John Farnham and Jacki Weaver, and from the animator who brought us the iconic ‘Life, Be In It’ and ‘Slip, Slop, Slap’ commercials, this reel relic screens in 3D at 7 pm on Thursday, 15 March at the NFSA Arc Cinema. ‘Abragoggles’ will be provided. Tickets are $15/$13.

The following night, enjoy another fun slice of cult cinema history (albeit slightly more adult) in the notoriously raucous, futuristic, satirical, intergalactic military miasma of bugs and blood that is Starship Troopers (1997) . Re-live this spectacularly irreverent and iconic 90s alien adventure 20 years on from its initial release, directed by Paul Verhoeven the Dutchman who has previously delivered Robocop, Total Recall, Basic Instinct, Showgirls and the more recently critically acclaimed Elle. Screening commences at 7pm on Friday, 16 March at the NFSA Arc Cinema. Tickets are $15/$13.

Futureproof - 25 minutes ago
It's not just Hyundai EVs, it's Hyundai in general. There have been worldwide recalls for vehicle fires on Hyundai ICE vehicl... View
nobody - 3 hours ago
Hyundai have recalled about 1,000 electric vehicles in Australia to replace the batteries, and about 82,000 worldwide. LG hav... View
Community 76

JS9 - 2 hours ago
While there is no doubt that the contracts are unfavourably placed at the moment, its not '3 times the current electricity pr... View
bj_ACT - 3 hours ago
Spot on Chewy. As has been pointed out by a few people over the last year. The ACT government has signed up fixed price 20 ye... View
phydeaux - 3 hours ago
...and remember to take a clear photograph of the meter readings, in case you need to submit a correction. View
Opinion 78

jcjordan - 4 hours ago
It is unfortunate but in many ways the APS has lost the battle when it comes to bringing in a wide range of capabilities back... View
Sarah Hassell - 14 hours ago
S550 of the fair work act, doesn't matter how you structure it there is no avoidance. View
Sarah Hassell - 14 hours ago
Its cheaper to have an in-house trained pool of staff that can move with need. I think you can see evidence is increase of la... View
News 2

Rob Quarmby - 16 hours ago
Most I’ve ever seen around my area this year hadn’t seen them for a long time before this... View
Daniel Palmer - 18 hours ago
Minus the fires, has me stumped why. View
Lifestyle 16

@the_riotact @The_RiotACT
RT @Breaking_247: Police are appealing for any information or dash-cam footage after a #fatal crash near #Tilba this morning https://t.co/N… (15 minutes ago)

@the_riotact @The_RiotACT
There's nothing like having your #artwork featured on a reality TV show like @TheBlock to get tongues wagging in your #hometown https://t.co/11tdAFykJx (1 hour ago)