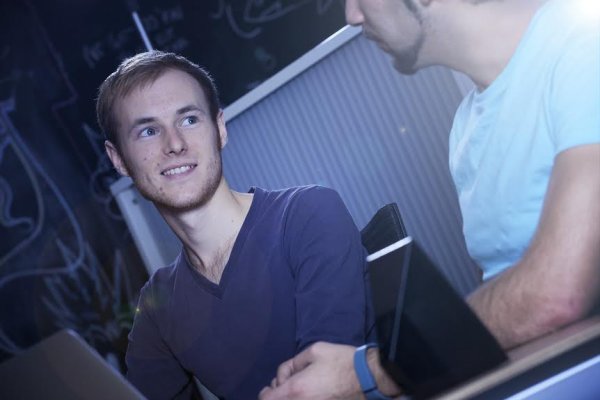 Andrew Clapham and Zakaria Bouguettaya, directors of mobile application development business Imagine Team, don’t like taking no for an answer.

In 2011, after the ACT Government refused to fund or assist them to build an app for tracking ACTION buses in real-time, the pair–still university students at the time–used the freedom of information act to access the data they needed and built the MyBus 2.0 app anyway.

Andrew says that the rejection made them more determined to succeed.

While Imagine Team hasn’t profited from MyBus 2.0, the app gave Andrew and Zakaria the exposure they needed to start their own business. They are now based at Zoo Advertising’s Kingston office, focusing full-time on mobile application development. Their client list includes the Canberra International Film Festival, PCYC and the ACT Government (for projects unrelated to ACTION).

“People started approaching us and saying, ‘You built this great app. Can you make one for us as well?’ And we realised that hey, we can make money out of this,” Andrew says.

Imagine Team also recently released QuicklyPay.it, an iPhone and Android app that takes the awkwardness out of asking friends to repay money. Zakaria says that he came up with the idea for the app after dining with friends at a restaurant that didn’t split bills.

“I offered to pay the bill. Everyone owed 20 or 30 dollars, and there was about eight of us, so while it wasn’t enough money for me to be aggressive about chasing people up, it was also a pretty big hit to buy dinner for eight people,” he says.

“We wanted to find a way to make splitting costs much more simple, and also to include a mechanism for accountability. In a group environment, it would be a great idea to show who’s paid and who hasn’t. If you’re the last person in the group to pay, everyone knows.”

The app also offers a business option to make organising and paying for group bookings, such as ski trips or tables at functions, easier.

Zakaria’s advice for aspiring entrepreneurs is to build products that you’re passionate about, and that you actually would use yourself.

“We once built an app called Life Gym after we found this huge study of people’s gym habits, and realised that women are more likely to go to the gym once and then never go again.

“We thought that it was a great opportunity from a business point of view, but neither Andrew of myself are gym junkies, or women for that matter. We built this app for women and for gyms, that we weren’t passionate about, and wasn’t relevant to us. It flopped tremendously,” he says.

Andrew and Zakaria say that they have chosen to stay in Canberra because of its small and nurturing startup community, access to grants and other opportunities and the fact that everyone knows everyone.

“Everyone knows everyone, and everyone’s really supportive,” Andrew says. “There are groups like CollabIT, Entry29, ANU Entrepreneurs, Innovation ACT and all of these other societies that want to help you succeed.”

We’d also like to extend some love to NICTA and the eGovernment cluster, instrumental in growing our business in Canberra.

The link in the article doesn’t work. You can download the bill splitting app at http://QuicklyPay.it/download

Liam O'Toole - 4 hours ago
National Capital Authority ignored all submission put in against the redevelopment. It's the biggest waste of money and vanit... View
Community 2

Anne Brechin - 6 hours ago
I’m not convinced society as a whole wants to jail 11 year olds. View
Coralee Rauber - 7 hours ago
At age 11 the kids know better. The age should stay at 10 to be sentenced View
Community 4

Paul Mathews - 8 hours ago
Looks like my Neighbour's BARKING DOG, went off BARKING 3 wks agao View
Alex SmilyLex - 10 hours ago
I had at least 3 encounters with dingos in the last 2 years from 8 trips to the top of the montains.... View
Opinion 4

@The_RiotACT @The_RiotACT
Sophia Brady knuckled down and did her Wurst at the Harmonie German Club - Canberra's headquarters for hearty-food fans where pork knuckles and mega-schnitzels abound https://t.co/YFY9oVyxmM (3 hours ago)

@The_RiotACT @The_RiotACT
From the street, the award-winning 35 Negus Street in Watson will stop you in your tracks. But behind closed doors, it will take your breath away https://t.co/cXNZqMbJsP (4 hours ago)