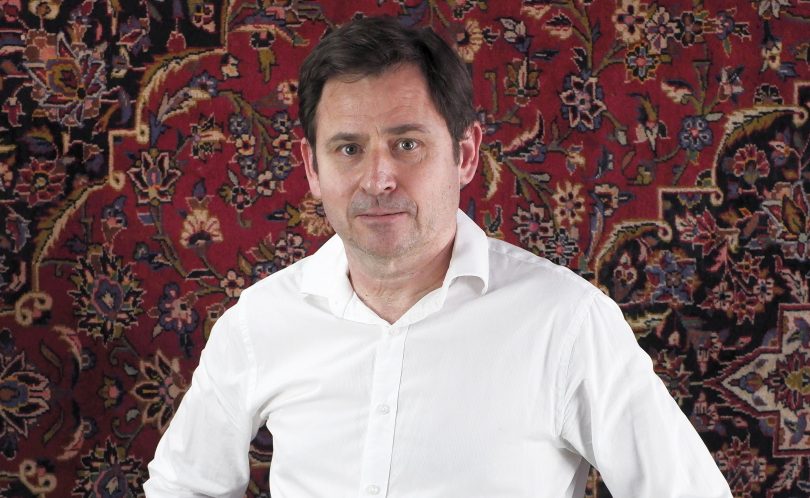 A self confessed “tinkerer” and avid cycler, Andrew’s passion for antiques began with old bicycles.

Not all of us are lucky enough to find a career that we’re passionate about and can make a living from. But for Andrew Whitehead, an obsession with antiques has led him from a weekend job as an antique dealer, to being one of Australia’s most respected art and antique appraisers.

Having had a soft spot for collecting at a young age, Andrew would proudly amass shells and preserved creatures which he displayed in his own private natural history museum (located in his family’s garden shed).

A boarder at Canberra Grammar in the 1980s, Andrew diligently completed a Degree in Applied Science, though his heart wasn’t in it. He much preferred his weekends – driving from town to town searching for antique pushbikes and parts which he then spent countless hours restoring.

“I was always a tinkerer,” says Andrew. “I loved to fix things, pull them apart, and see how they worked. Being a keen cycler, I was fascinated with bikes and the idea of restoring them. It was like giving them a new lease on life, without forgetting the fine quality of how they were made.

“In the ‘good old days’, items like bikes were a major purchase for most people. They bought one to last a lifetime, and they cost a fortune compared to the average wage. I think nowadays we have a more disposable take on purchasing. But back then, you usually only bought one, and that one was expected to last.”

Andrew’s first job was at the old Canberra Brickworks, which had an antique centre open on weekends. After completing his degree, Andrew continued to work there, eventually opening his own shop.

“Back then I spent my weekdays travelling to source stock in country areas or at the Sydney auctions. Then I would repair or restore them all ready for Saturday morning. It was 1991 and antiques were really popular. The Brickworks store led to a larger store in Fyshwick, which I ended up running until the year 2000.”

From dealer to appraiser

Obsessed with learning as much as he could about the origins of antiques and how to value them, Andrew subscribed to all the trade magazines and travelled as often as he could.

He formed friendships with experienced antique dealers in Sydney, who shared their extensive knowledge and helped him fast-track his career as an appraiser.

“Some of the people I was lucky enough to meet had been in the industry for generations – going back to the antique trade in 1800s London. I received some great mentoring, which gave me a huge head start as an appraiser.”

Andrew decided to get his certification, and was soon asked to join Lawsons auction house in Sydney as head appraiser.

“At that point I began moving beyond basic furniture to more artistic antiques, such as Asian and Islamic arts. This is a different level of appraising because you’re considering something more than its intrinsic value and taking into account its cultural value.

“I started getting invited to appraise collections all around the country. In some cases, this meant seeing things through from a valuation to a sale that fetched into the millions of dollars.”

Andrew is now a highly sought after appraiser based in Canberra. He is also the head appraiser for local online auction house ALLBIDS.

“The auction trade has always been a well-established part of buying and selling antiques in Sydney, but has taken longer to grab a foothold here in Canberra. Only in the past decade have people realised its potential.”

Andrew says those interested in getting a valuation generally need it for one of two reasons – insurance or to sell. And for those looking to sell, there really isn’t a better way than via auction.

“What something is worth depends on what someone else is willing to pay for it. In the case of auction, the auction house has a strong network and marketing budget which allows them to attract quality bidders.

“When it’s online it is even more valuable, because that’s how most people search for antiques these days. It’s all about being able to describe an item correctly so that the right audience can find it.”

For those looking to sell a piece of art or an antique, ALLBIDS will arrange for Andrew to do a free appraisal, before photographing, listing and marketing it to a local and international audience.

“Auction is accessible,” says Andrew. “Whether you’re keen to buy or sell, it’s the easiest way to go about it without needing to set up your own store!”

Of the local market moving forward, Andrew says antiques and collectables have become a symbol of affluence, with cultural pieces (such as Asian antiques) in high demand.

“Collecting can be a great investment, and some pieces have a lot of sentimental value when they date back centuries within a particular culture. This is always going to be a particularly exciting and valuable area in the antique trade.”

Tim Mak - 23 minutes ago
Summernats is fine. The people who attend them are not. View
Sam Austin - 2 hours ago
Fair enough but its 1 week a year. But there needs to be a place to do this stuff, think of it like a sporting facility golfe... View
Opinion 109

Claire Lenehan - 45 minutes ago
Helene Jermolajew Thanks! Stay safe View
TheSilver - 3 hours ago
Of course no one want to get sick, but it is part of the human experience and unavoidable. The real question is, and always h... View
Julie Kidd - 3 hours ago
Thanks for reminding us. This isn’t over. View
Opinion 6