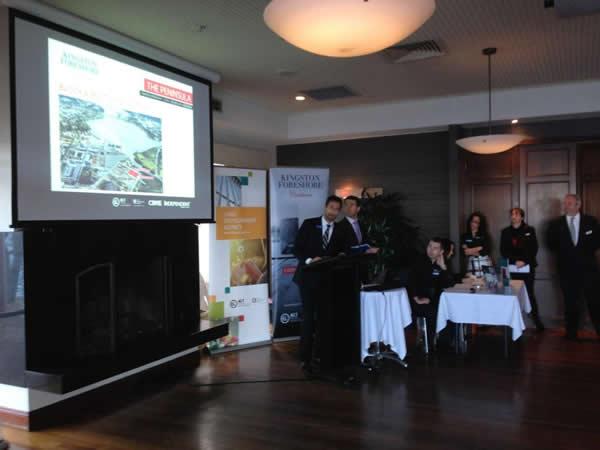 Two unique mixed-use sites on the Kingston Foreshore both sold under the hammer this morning to local developers.

Block 3 sold for $6.95 million to Boris Planinac of Pavillion Homes. Block 4 sold for $7.35 to David O’Keefe of Madison Constructions.

Both blocks allow for a range of residential and commercial uses, with a limit of around 75 residential apartments each.

CBRE agent Mark Nicholls said there was a lot of local interest in the blocks.

“Bidding activity was good and we hit the reserve quite quickly,” he said.

“A few of the local developers that missed out on smaller blocks at the recent Campbell 5 auction were looking to pick something up, and we’re seeing a bit of confidence returning to the market now.”

The blocks will be the last waterfront sites to be made available for some time. The last remaining waterfront site cannot be released until the existing electricity station has been relocated. 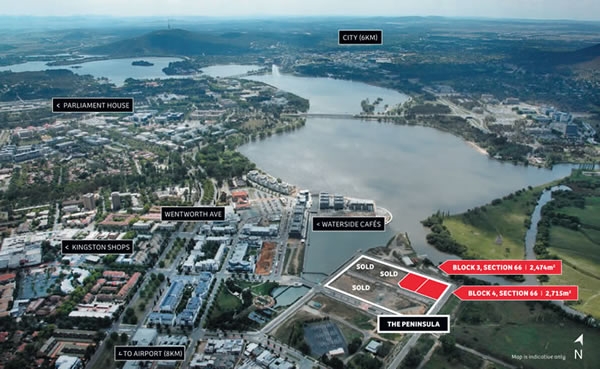 Meh. Line the foreshore with trees, not hideous apartments.

S Bright - 22 minutes ago
Sorry, but no. 'We don't need the vaccines'??' Yes, we flipping well do! We're already giving 10% of our vaccines to NSW. I'm... View
Sam Oak - 33 minutes ago
No surprises here that a labor government is refusing to help a liberal government. We are only shooting ourselves in the foo... View
News 43

Finally Relented - 31 minutes ago
Yes - have noticed this too. An elderly lady was quite distressed at a Coles, and said she didn't own a phone and didn't know... View
TimboinOz - 35 minutes ago
These blocing pages should be scanned for finger-prints. All antivaxers are boof-heads or worse.... View
Yvon Nemchinov - 1 hour ago
Well considering you have probably never lived under totalitarian rule, I expect you to lack understanding, Matthew. All of t... View
News 77

Bob Fraser - 2 hours ago
Good on you Debbie, some sound advice at last amongst a lot of cringe-worthy comments. View
Geeta Datta - 3 hours ago
Kieran Angus Maybe, it's an EEG I'm thinking of. It's amazing how little they tell you about yourself lol. View
Julie Macklin - 3 hours ago
Nora PrestonPlease give the source of that graph. Without a source it’s worthless. View
Opinion 1

Capital Retro - 3 hours ago
"I have sat on a bus, not moving on Commonwealth Avenue Bridge......." I wasn't aware that there are exclusive lanes for buss... View
Julie Macklin - 4 hours ago
Bill GemmellI I agree. I suspect a lot of people here complaining about the tram, don't use public transport (or rarely at be... View
Bill Gemmell - 4 hours ago
Jason Todd be careful not to confuse capital versus operating costs. View
Lifestyle 8

@The_RiotACT @The_RiotACT
The ACT will increase its Pfizer vaccine rollout this week but won't be sending supplies to NSW. Around 10 per cent of ACT jabs currently go to people who live in NSW https://t.co/YI8DV5O0gi (45 minutes ago)

@The_RiotACT @The_RiotACT
From building #WodenPlaza to making movie sets in #Hollywood and back again - this is carpenter Maury Cooper's epic journey https://t.co/Y2xFL2YN7A (1 hour ago)

@The_RiotACT @The_RiotACT
The historic St John's Orphanage in #Goulburn has been ordered to be torn down within 90 days https://t.co/2MpopcNQHt (3 hours ago)