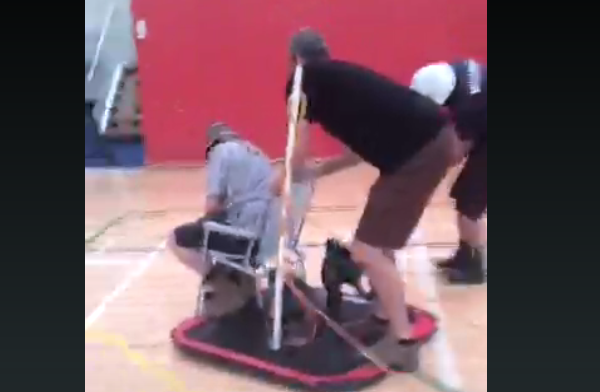 As the world prepares for Marty McFly to come Back to the Future today, an ANU scientist has this morning demonstrated a prototype hoverboard.

In the 1989 movie Back to the Future 2, Marty McFly and Doc Brown travel forward to October 21, 2015 and experience amazing technologies including a levitating skateboard.

Dr Graham Walker from the Australian Centre for the Public Awareness of Science demonstrated his hoverboard in an ANU gym. It consists of a deck chair on a piece of plywood powered by two leaf blowers and can rise above the ground with two passengers on board.

Dr Walker said afterwards that a hoverboard like the one in Back to the Future was still a long way off.

Scientists had developed magnetized boards that hovered over specially magnetized ramps and even trains that levitated over super-magnetised tracks, but not a hoverboard that could travel anywhere, over any surface.

He said he used his hoverboard in educational programs to inspire students to take up science. It was useful for demonstrating concepts in physics like gravity and friction.

You can see the demonstration on Periscope here.

Nat Smith - 33 minutes ago
I know people that are waiting for two bedroom houses for 7 years . They have not replaced civic Kingston or narrabundah apar... View
Food & Wine 5