A man’s been arrested and charged with 11 offences following several incidents across Canberra involving an allegedly stolen Landcruiser. Photo: File.

A 24-year-old man’s been charged with 11 offences, including threatening to commit arson, following multiple collisions across Canberra.

A white Toyota Landcruiser was stolen from a Bruce home at about 2:15 pm on Wednesday (5 October). Shortly afterwards, police received several reports it had been spotted on the wrong side of Caswell Drive.

It’s believed the same vehicle was involved in collisions on the Tuggeranong Parkway and Kent Street, Deakin.

The alleged male driver then stopped the vehicle in a Curtin playground on Strangways Street at about 3 pm. Police said he allegedly then took a jerry can from a nearby garage and stated he was going to set the vehicle on fire.

When confronted by a passer-by, the man allegedly left the area in the stolen Landcruiser before he’s accused of entering a Curtin residence, where he was told to leave by the homeowner.

Police located the vehicle on Parker Street in Curtin a short time later and arrested the man.

He’s been charged with aggravated burglary, taking a motor vehicle without consent, two counts of dangerous driving, three counts of not leaving particulars after a crash, three counts of providing a false name or address, and threatening to commit arson.

The man has been scheduled to front ACT Magistrates Court on Thursday (6 October).

This arrest was made by officers attached to Operation Toric, which targets dangerous driving and stolen vehicle incidents across the ACT. Since it began in August, more than 70 arrests have been made and more than 220 charges laid. 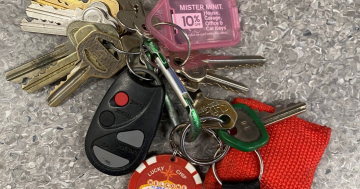