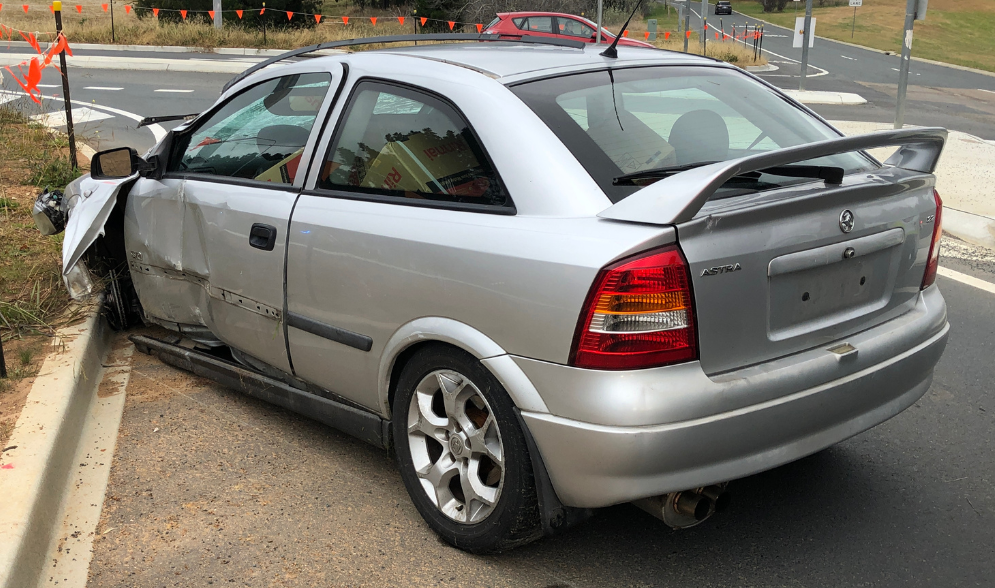 Darren Douglas Powell, 48, was arrested after he was allegedly involved in a car chase on 13 June. Photo: ACT Policing.

A man has been remanded in custody after he was accused of leading police on a car chase through southern Canberra that allegedly ended when he crashed into a gutter and was arrested in nearby bushes.

The Astra allegedly failed to stop for police, sped along John Gorton Drive onto Cotter Road before it lost control near Dunrossil Drive, entered the median strip, collided with a street sign, sheared off a wheel and crashed into a gutter near the Dudley St intersection.

Police said the driver, believed to be 48-year-old Darren Douglas Powell, is also accused of fleeing the scene but was arrested in nearby bushes.

Magistrate Robert Cook formally charged him. His 12 charges include reckless driving, failing to stop for police, resisting a territory public official, possessing suspected stolen property, possessing a drug of dependence, possessing a knife without a reasonable excuse and driving while disqualified as a repeat offender.

He is accused of possessing a substance believed to be methamphetamine, a flick knife and five suspected stolen gas water heaters.

Mr Powell did not apply for bail and was remanded in custody to 5 July for pleas to be entered.

ACT Policing alleged items found in the Astra may have been stolen from building sites.

Building site workers are urged to report the theft of items to police.