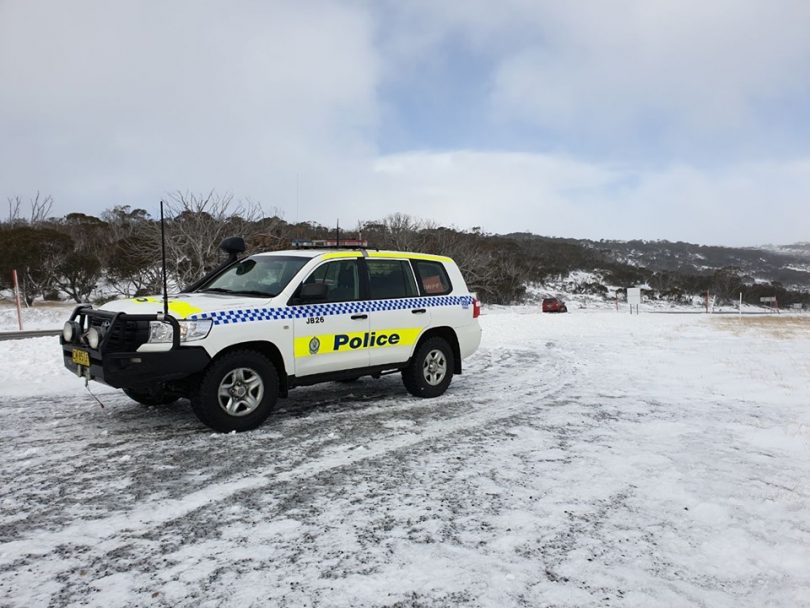 Police have arrested a man from western Sydney for intimidating police. Photo: File.

Police in the Snowy Mountains have arrested and charged a man from western Sydney with intimidating police.

He originally came to the attention of police for allegedly refusing to comply with COVID-19 safety precautions.

At about 10:00 am yesterday (30 July), the 43-year-old man attended a ski resort in the Snowy Mountains. As he approached a ski lift, the lift attendant requested the man cover his face as per the resort’s COVID-19 safety plan.

The man allegedly refused to comply and, after arguing with staff, he was asked to leave the resort. Police were called when the man refused.

Officers from Monaro Police District attended and spoke with the man before directing him to leave the area.

The man complied and left in a grey Toyota Hilux.

A short time later, police were in their vehicle near Prussian Creek on Kosciuszko Road when the same man allegedly drove past beeping his horn, before swerving across the road.

The man was stopped by police a short distance away. He allegedly refused to take a breath test.

The man was arrested and taken to Jindabyne Police Station where he was charged with intimidating a police officer, refusing to produce an Australian drivers licence and other traffic offences.

The man from Kellyville in western Sydney has been refused bail and is due to appear in Queanbeyan Local Court today (31 July).

chewy14 - 51 minutes ago
Wow, polling commissioned by a left wing think tank finds that the left wing Greens are going to do really well at the next e... View
News 1

JS9 - 1 hour ago
Gee the ACT really does scrape the bottom of the barrel to find political nominees on all sides of politics.... just another... View
News 20

Mike of Canberra - 16 hours ago
Well, let's see how their policies stack up as we progress through the election campaign. As for a rate freeze not being a po... View
HiddenDragon - 19 hours ago
If the yet to be debunked Stanhope/Ahmed diagnosis of the ACT's public finances is anywhere near the mark, whether we end up... View
News 8

@The_RiotACT @The_RiotACT
The West Basin place plan has been released by the ACT Government, providing valuable detail about the multi-year development, but little mention of where the area's residents will live https://t.co/ThGXcooFe6 (53 minutes ago)

@The_RiotACT @The_RiotACT
A chronic undersupply of tennis courts is denying the Gungahlin region a valuable resource, and could deny us another tennis champ from the region https://t.co/Kkounx37Me (3 hours ago)