Meet the Ed Sheeran fan who dares to dream 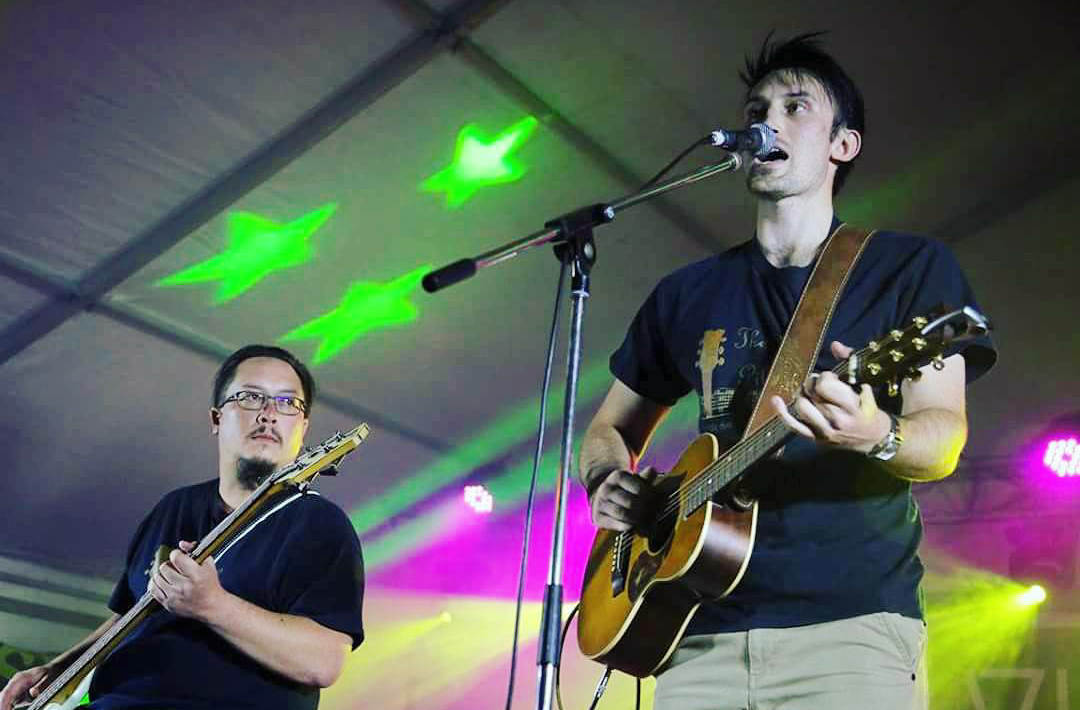 Richie Joyce dreams of the day his voice and talent fill a stadium with 45,000 people – all singing his songs.

As well as covers Joyce sings his own compositions. He is heading to a recording studio in Sydney with his song about a pretty blue eyed girl he has just met. In the song, a favourite on Goulburn’s pubs and clubs’ circuit, the tall young entertainer asks her straight up to go out with him. And she says yes. Joyce has some front. Audiences love him.

Ed Sheeran inspires him. “One guy with a guitar for two hours, it’s just unreal. The music he writes suits my voice,’’ says Joyce, a rising 24 year-old musician. He doesn’t hold back. He is a massive fan of the red-headed, acoustics-playing Sheeran, who is comparable to the Beetles.

“He loops a lot of things, he makes a full band type of thing just by banging the guitar and making a whole bunch of noises. I’m trying those things, the songs I write are easy enough to loop throughout.’’

Joyce and bass guitarist Thady O’Connor stepped up as Rich Pitcher in this year’s Vibesfest, a youth festival in Goulburn and platform to perform with headline acts. Melbourne quintet Jakubi was the headliner, and a smash hit.

Appearing earlier, Joyce did not stick around afterwards to rub shoulders with the Australian stars. After 45 minutes playing he and O’Connor bolted to another gig at the Soldiers Club. They don’t knock back anything.

Sheeran started out playing to small crowds in London. Rich Pitcher’s humble start was at the Laggan Hotel, a spec of a place near Crookwell.

A few years ago Joyce was finishing high school, dabbling with an acoustic guitar when his teacher, Thady O’Connor as it turns out, urged him to sing for his HSC assessment.

“I got, you would nearly call it, an angry phone call from his father Phillip, saying why are you changing his repertoire so close to the HSC?’’ O’Connor says. “We put on a little concert before the HSC in the music room. Phillip stood up at the end and applauded,’’ he says.

Mr Joyce had not heard Richie sing much. On the other hand, O’Connor had, and recalled Richie”s jingle which finished second in a radio star competition in 2010. The Red Cross ran the national competition to encourage blood donations.

After high school, Joyce didn’t touch an instrument for the next three years. But O’Connor kept running into Mr Joyce. “He was always into me, saying I had to get Richie doing something,” O’Connor says. That happened in 2014 when the teacher and pupil began their bid for stardom.

Three years later, with a set of covers twice as long as the one they began with, bookings until October next year, and appearances at the Dickson Tradies, Queanbeyan Hotel and all the Goulburn venues, they have a plan.

With Phillip Joyce’s backing they are preparing for a day’s recording at Forbes Street Studio in Sydney and two days of mixing and creating a professional product.
“I don’t want to be a pub band, this is the next logical step,’’ Joyce says.

“Naturally you would think you would get offered more festivals, more big time gigs and hopefully continue to go up hill. We are still playing in Goulburn, that’s good. That does us well. It’s not where I want to be (long term),’’ says Joyce.

Growing in confidence, Joyce performs 10 of his own compositions. The one gaining most traction is Blue Eyed Girl.

“Everyone asks, who is the blue eyed girl? ” Joyce says. “There is no blue-eyed girl, it’s just a good story and that’s what I like to write.’’

O’Connor rolls his eyes. “No one believes him,” he says.

“I dated a blue-eyed girl for six years,’’ says Joyce. “I’ve already written a break-up song about her,” he says, confessing she was his first major girlfriend.

@The_RiotACT @The_RiotACT
Bogong moths, witchetty grubs and crickets could add more crunch to your cooking according to a @CSIRO report outlining Australia's potential in the edible insects market https://t.co/oevzIJa51X (57 minutes ago)