Experts in buying, selling & renting
Your property, your future
27 November 2020 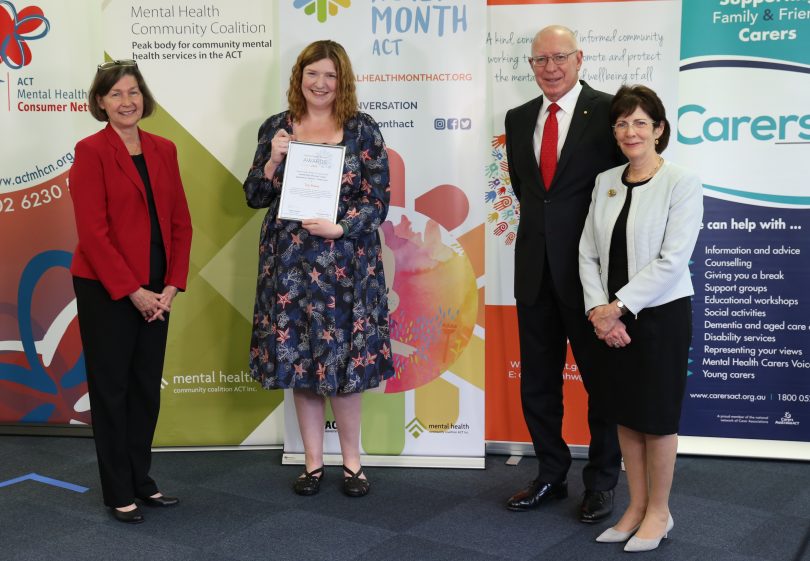 When Terri Warner was 14, her spiral into mental illness began. At 16, she attempted suicide.

Jodie Klaus’s daughter has dissociative identity disorder (DID) as result of sexual and family violence in her earliest years. Her mother keeps a roster on the fridge of the different identities who manifest and how best to meet their needs.

For both women, receiving an ACT Mental Health Month Award in 2020 was recognition of not just their own work in advocating and caring, but also the wider mental health message about being seen and heard on what can be a tough journey.

Both were recognised at the 2020 awards event, attended by Governor-General David Hurley and Linda Hurley. Terri received the Leadership through Lived Experience Award and Jodie received the Mental Health Carer Award. Recognition was also given across a range of other categories, including mentally healthy community awards for individuals and organisations.

Through her teenage years, Terri struggled with symptoms that were classified as a seemingly intractable mood disorder. In her early 20s, an MRI undertaken for other reasons revealed that at least some of her issues had an underlying neurological cause and that many of those issues had been miscategorised.

The experience showed Terri how important it is for people to be heard, and kickstarted her own advocacy in the sector.

“I went from volunteering for MIEACT [Mental Illness Education ACT] to training to be a consumer representative through the Mental Health Network,” she says. “I have a long history of accessing mental health services and throughout it there have been systemic problems I really thought could be addressed by users being involved in systems design.

“I wanted to see if talking about my experiences could change community perceptions as well as treatment care and support for people such as me and others.

“I am quite comfortable speaking up, and I fit in quite well in settings where I operate. I’m educated and I speak fluent bureaucrat. People with severe and persistent challenges don’t necessarily have that, but we all need this stuff to be fixed.”

Terri now works on a national level with SANE Australia, is an ACT representative with mental health working groups for the National Disability Insurance Scheme (NDIS) and is involved with multiple Canberra health services committees.

She thinks progress is being made in how we perceive and treat mental health at the mild to moderate level. But there is a “complete inadequacy of services” for people in the middle who need serious help but aren’t immediately critical.

“I was really honoured by the award because I have been working in the space for a while,” says Terri. “Knowing it was this year and who nominated me, it was quite special to receive this award and recognition.” 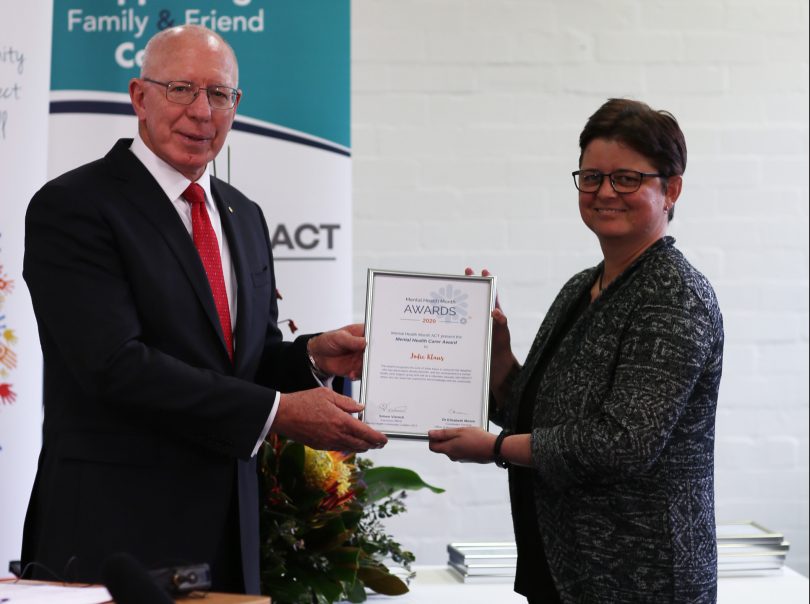 For Jodie, recognition from her family is enough.

“The response was, ‘Mum, you’re a complete legend,’ which was pretty nice,” she says.

The different identities are called parts: three see themselves as Jodie’s children, but two are parents themselves to younger parts. Some see Jodie as a nanny or a friend. Jodie’s daughter describes the experience in her head as like “being at a rock concert standing next to the speakers.”

Jodie acknowledges that DID is a controversial diagnosis, which can make support difficult to access. Her solution is not to engage in arguments, but simply help her troubled child to manage everyday life as smoothly as possible.

“I treat it very practically – ‘Let’s get everyone onboard to meet their needs,'” she says. “It’s a permanent reactive space and it needs a lot of patience. I am in survival mode a lot of the time.

“I’ve had to learn not to worry what other people think and I tend to ignore 90 per cent of well-meaning advice from people who have no idea what this is like.”

Jodie’s carer’s mental health group has been the most useful source of practical ideas, while Zoom catchups during COVID-19 have been a godsend.

“I was really shocked by my award,” she says. “My first question was, ‘What for?'” I’ve never been someone who has thought about rewards – you are just doing it to take care of your child.”