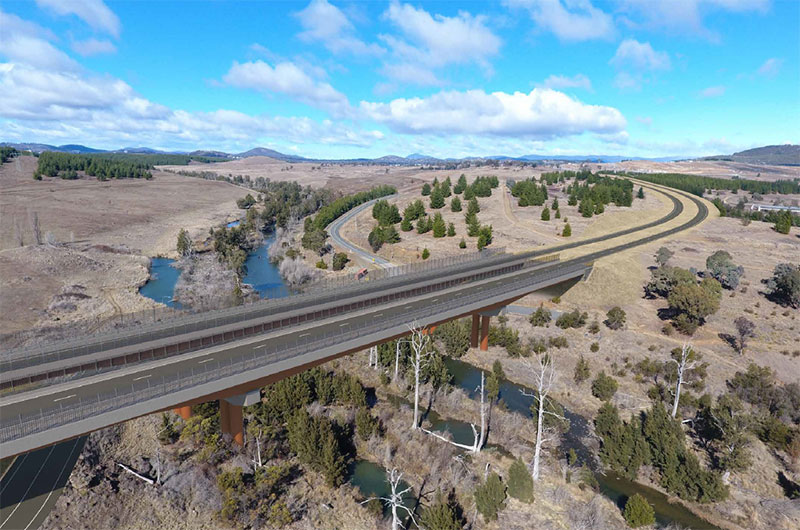 New details of the planned bridge across the Molonglo River to replace the problematical Coppins Crossing have been released ahead of construction in 2023.

The ACT Government still expects the bridge to be completed and open to traffic in 2025 but it is still assessing tenders for the $178 million project.

The bridge has been long called for and will make a huge difference to those who regularly travel between Belconnen and the growing Molonglo Valley and Weston Creek.

The Molonglo Valley Community Forum convenor Ryan Hemsley cautiously welcomed the government’s confirmation of the 2025 completion date but was keen to see a contract awarded.

“While it is great to see the government recommit to a 2025 completion date, we’re still awaiting confirmation that a contract has been signed for the detailed design and construction of this vital piece of infrastructure,” he said.

“Until we get that confirmation, any promises regarding this project will be treated with a reasonable degree of scepticism.”

According to a fresh posting on the project, the new bridge will span 227.5 metres across the Molonglo River and be built above the one-in-100-year flood level, solving the problem of flooding and debris closing Coppins Crossing, something that has happened regularly in the past couple of years.

It will contribute to more efficient traffic flow generally because when Coppins Crossing is closed, motorists are forced to use the longer route via the Tuggeranong Parkway.

The bridge will be a part of the completion of John Gorton Drive, replacing a winding single-lane road with a safe and secure dual-carriageway link.

READ ALSO Can Canberra be a global destination? The new strategy says we already have what it takes

The safety issue was highlighted in tragic circumstances when three Bangladeshi tourists died in a head-on smash on Coppins Crossing Road in October.

The bridge won’t just be for motorists but will have on-road cycle lanes and off-road shared paths, as well as space to allow a future light rail connection.

This project is jointly funded between the ACT and Federal Governments as part of the Commonwealth’s Investment Road and Rail Program.

The development application for this project was approved in February 2021, and the tender process for design and construction closed in June 2022.

Another infrastructure project by the ACT Govt which is never going to happen by the planned date. This Govt needs to get its stuff together and do these projects properly or not all. When is the Govt going to fix the incredibly dangerous dip in Erindale Drive?? Hazard signs don’t cut it and the part of the road with the dip is not that old. I’d expect compensation to be paid to the ACT Govt by the builder of the road for such a crap job.

When is William Hovel being duplicated? The sign has been up for a good 2 years

Simon Ollenbach leave it a while longer and then the Federal Government will end up building a paying for it.

Being above a 1 in 100 yr flood is a start but it must withstand much more.
Already this year and not far away, an Australian town was devastated by a 1 in 5,000 yr flood.
We must be smarter. The neglect is costing us too much already.

Worth noting that there is no single community voice.

Is this Coppins crossing or down near the sewage treatment plant in Holt?

Does the tram go in the middle?

Three years to build a bridge??? Wow! They should contract a Chinese company that builds them in a month!

Dumping many thousands into suburbs lacking infrastructure and services is as Australian as binge drinking and roadkill.

So you don’t have a problem with the 3rd world lack of planning and infrastructure for thousands of people?

More lies from the greens-labor coalition. They’ve been promising this for years. What is probably going to be the outcome is a single lane each way bridge built only for them to duplicate it 12 months later at double the cost. Remember when they built the glenloch interchange as a single lane? They have form

Again the Barr government acts well after the time to implement essential infrastructure. Absolutely incompetent planning. The thousands of hours wasted and general inconvenience of these failures is at a cost to the community. If only there was a viable alternative.

The longer you wait the more expensive its going to be and that’s one ugly bridge.

I understand there is a global movement for the construction of sexy bridges.

This mob has to go.

Stop it. My ribs hurt from laughing

Sorry but this mob wont put the right infrastructure in, theyll just divert the funds to the trainset.

Shayne Borger ummm, this article is about investment in infrastructure

Mark Parton MLA , will the Canberra Liberals commit to building the bridge, here and now if elected in 2024.

What’s he going to do by 2024 brains? The tender closed in June, it’s going to be announced who is going to design and build the thing early next year. By 2024 the thing is going to be out of the ground and well on the way to being finished.

Should have been built before the suburbs out there

And we’re still waiting for the duplication of William Hovell Drive!! This Barr/Rattenbury mob are just piling on the BS.

Rick Barnes, brings back horrible memories of the excruciating amount of time they took to complete the Gundaroo drive duplication. However, this mob will always have ready made excuses to either shift or avoid wearing the blame.

Shan Weereratne do something about it at the next election….give this lot the boot

Shayne Borger, Yes, I am on board.

Given up expecting that to ever happen. God knows how bad Ginninderry/Holt is going to get before they worry about anything out there….

ACT Government has been proven to lie, lie, lie, lie. I’m 100% convinced that whoever is awarded the contract, it will take double the time and that the tender will be a farce and budget blown out.

And the bridge will collapse…

The government is fudging many infrastructure projects. Mostly reacting quickly to the liberals.

While they say that Athllon drive is done, they’re pulling and shifting funding down the road. And one would assume they’ll keep shifting it.

At the end it’ll take 3 times as long and they’ve only spent 1/3 the money on projects in that area.

Projects in some areas in Canberra seem to fly through planning and construction, these areas are getting much more spent than those area’s with the 1 per 20 year projects. 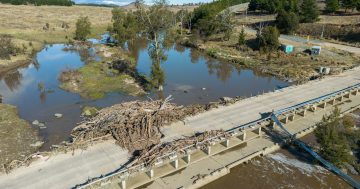