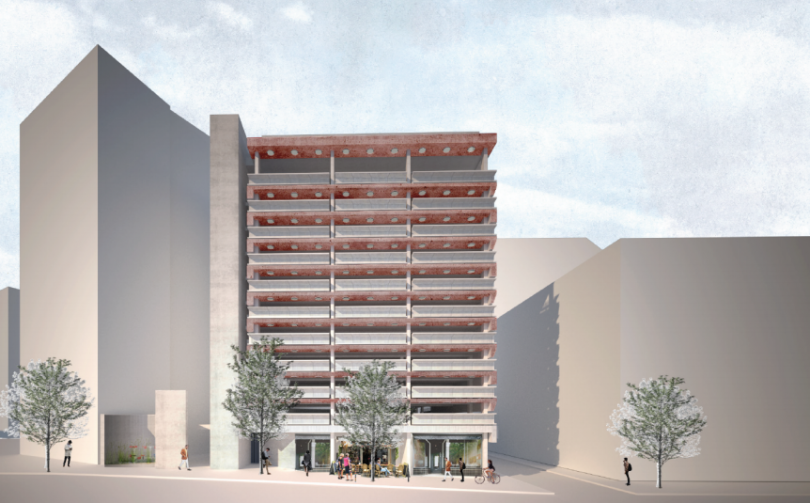 An illustration of Molonglo’s proposed car park in the city on Nangari Street. Images: Candalepas Associates.

As the city’s surface car parks disappear under multi-storey development, Molonglo Group has lodged its plans for an 11-storey car park to service an adjacent office tower and meet public demand in the eastern end of Civic.

Known as Londonside, the 213-space proposal for Block 16 Section 12 is on the same site as the Molonglo-owned 221 London Circuit, which currently only has 36 spaces for tenants.

There will also be five motorcycle and six accessible spaces.

Molonglo also proposes to activate the Nangari Street frontage with three street-food micro-tenancies on the ground floor totalling 114 square metres, which it says will bring some life to an otherwise sedate city street.

It says that while attention has been focused on the city’s north and New Acton, the east end is now awakening, pointing to nearby high-rise residential development and the Snow family’s two-building Constitution Place development on a former car park, and the proposed redevelopment of the cultural precinct, including Canberra Theatre, next door.

Constitution Place, which is due to be completed by the end of the year, comes with a basement car park but it is unclear how much of that will be taken up by ACT Government staff occupying the new government building.

Molonglo will need to have the lease varied to allow the car park and also wants to subdivide the site so it can own, and sell if need be, the office tower and car park as separate sites.

Being more than 11 storeys in height, the structure will also need to satisfy the requirements of the National Capital Plan, but it is substantially shorter than 221 London Circuit. 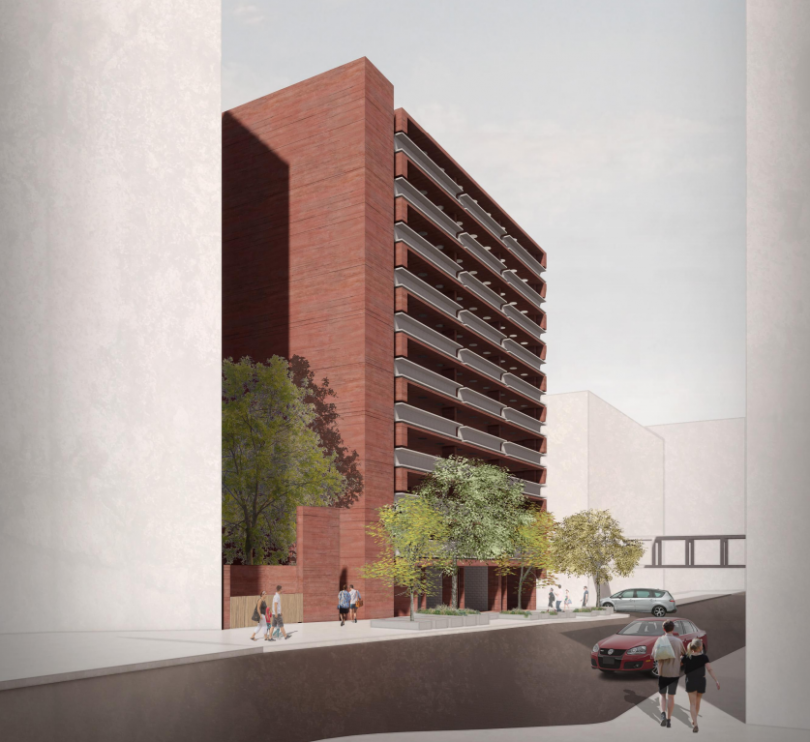 Another perspective of the proposed car park: will be a concrete structure featuring red patterns ”reminiscent of a Josef Albers print”.

Molonglo says the site, overshadowed by office towers and incapable of sufficiently accommodating waste collection, is unsuitable for residential development but the proposed car park could be adapted for other uses.

It says the car parking spaces to the Nangari Street facade could provide commercial spaces, for example, yoga studios or gymnasiums, or art studios and gallery spaces, as the existing floor-to-floor height is suitable.

The rooftop level is designed so a shade structure could be added, which would allow for the installation of solar panels. The DA says the rooftop can also be adapted to accommodate a roof-top restaurant, which would include greening of the roof.

The DA says cyclists will be able to access existing end-of-trip facilities at 221 London Circuit via the Rabaul Lane driveway entry to the new car park. The Allara Street off-road bike path, part of the City Cycle Loop, is nearby.

It maybe just a carpark but Molonglo believes it will make a positive contribution to the city’s urban landscape.

”Most car parks are cheap, drab and thoughtless structures,” Molonglo says. ”For some inexplicable reason, we permit buildings with such functional uses to behave as though they don’t have a responsibility to our streets, our neighbourhood and our city. But they do.”

Designed by architects Candalepas Associates, the car park will be a concrete structure featuring red patterns ”reminiscent of a Josef Albers print”.

Square, drab, brown, uninventive. Absolute negative for the street, city centre and Canberra. And this claims to be architecturally designed. Must’ve taken 5 minutes to draw up. Incredulous and greedy to demolish a park and build an 11 story carpark, especially considering how we are trying to encourage public transport. This is reminiscent of the destructive lunacy of the 50s and 60s, whereas the environment and people in general were placed before the needs of the car.

Its one of the saddest, non-descript, decrepit parks you will see around Canberra. Its like trying to claim the Dickson “Parklands’ to be anything but primarily an abandoned club site with nothing on it.

I do agree however it is an ugly building – but at the end of the day its a carpark. Only so many ways to put lipstick on a pig… 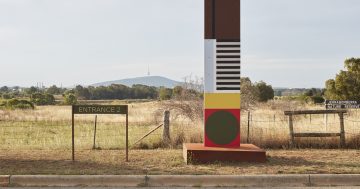 Molonglo prepares to start next phase of Dairy Road development