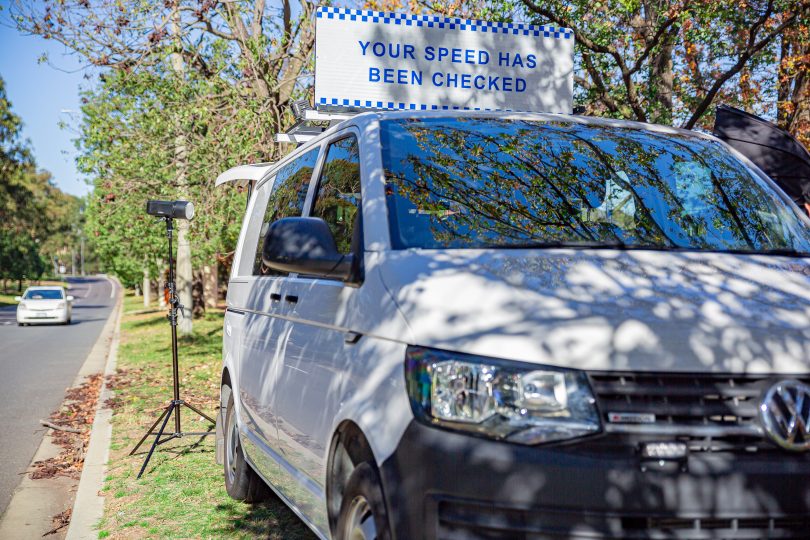 More on the way: the ACT’s mobile speed camera coverage will soon be even greater. Photos: File.

Leadfoot drivers beware – the ACT’s speed detection net is about to be widened with the addition of two new mobile cameras as part of the government’s road safety program.

They have been a long time coming, being first announced back in June last year.

Last week the government awarded a half a million-dollar, two-year contract for the two new mobile speed cameras and maintenance of the fleet to Victorian-based traffic technology specialists Vitronic Machine Vision.

This will bring the number of mobile cameras in the fleet to 11.

The deal also includes an upgrade to the existing cameras, new computer hardware and standardisation of the technology across the fleet so they can be interchangeable across the traffic camera network.

The mobile cameras can detect speeds across six lanes of oncoming and outgoing traffic depending on their location.

The decision to boost the mobile camera fleet was based on an independent report into the ACT’s Road Safety program which found that they have saved more than $60 million in road trauma costs each year. 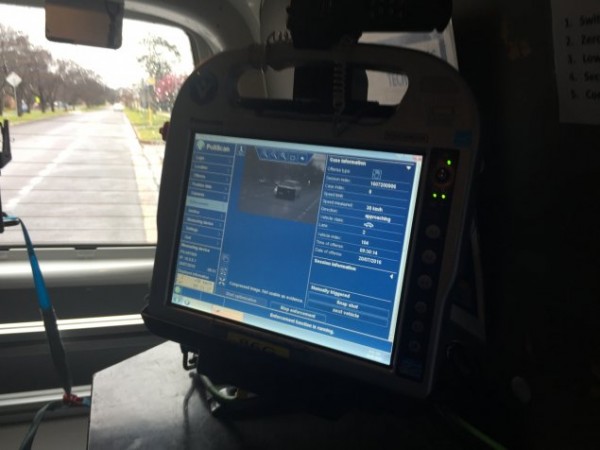 The computer display on the inside of mobile speed van.

The report said the mobile speed cameras program had reduced accidents by around 22 per cent between September 2016 and September 2017 and prevented up to 120 casualty crashes that could have resulted in a fatality or injury, and 2,900 property damage crashes.

The data also showed that over 80 per cent of crashes in the ACT occurred within 0.5 km of a site used at one or more times for mobile speed camera enforcement.

The government believes the two additional mobile speed cameras will prevent an additional 11 casualty crashes and over 170 property crashes per year.

The mobile speed camera program results in about 30,000 fines being issued a year, generating about $10 million in revenue.

“I think it is important for the community to see the value in mobile speed cameras. There is cynicism sometimes around cameras and hopefully, people will see they have a significant impact on road safety.”

How does one get caught by a speed camera van, seriously, they are big, white, can see them a mile away…

Also what about all the people who run res lights……. I am new to Canberra and always look beforehand leaving my green light…… scary

I don’t mind the speed cameras I had been driving for 29 years before my first ticket. I was overtaking a truck where the speed limit changed from 80 to 60 and the truck covered the camera, I was surprised to say the least. Then a few months back In Canberra I was pulling into a 80 zone and just sped up as not to annoy the person behind me and got done by a mobile camera for 8 over ? jeez felt a bit robbed on that one. I know speeding kills and I bet harassed if I do the speed limit. Also tailgaters should get fined and also people who drive during the day when it’s raining and can’t see the car in front cause it has no lights on should be fined too…… and people who drive in the right lane for no reason should get fined too. Lol probably people want me fined for posting this ?

They are just ramping up in anticipation of fining any fossil fuel powered vehicle that dares travel on the ACT’s extra wide multi lane bike paths of the future (formally known as roads).

Better if there were more mobile units to catch speeding tailgaters. This I was towing a truck home today it was so close behind me.

Maybe they can raise enough $$ so our rates don’t have to rise another +15% yet another year in a year...

Every road is money.

Road safety = We are seeking new revenue streams.
Also amazing I never see these on anything but long straight bits of road, usually at the bottom of a hill.

Need mobile patrols. Too many idiot drivers and speeders in Canberra. No deterance when there is no highway patrols with radar.

Nigel Milton how about place it before the fixed cameras and get all the flogs who slow down to 10 under the limit!

John Carroll either side then

Nigel Milton why are you worried about them? It’s their risk to take. It’s the unnecessary slowing to 20kmh under the limit before a camera that’s most likely to cause an accident!

You guys voted for this

Seriously at the bottom of the hill in Chisholm !!!

Mon Noremac they do it in Conder too on Tharwa Drive. Just means you’ve got to ride the brakes more.

Michelle Butt I know and maximise the people the catch that take their eyes off the speedo for a second. They also hide in blind spots. It shouldn’t be allowed

Nads And I read the comments! 🤦🏻‍♀️

Police on the roads are the best deterrent, people see these, red light cameras or speed cameras slow down, go through them then speed up again, what a joke

I thought ACT labor would of waited a little longer after the election to start taking money out of their voters hands....

The best way not to give them your money is to do the speed limit.

It's really not that hard.

Not an issue if you're doing the right thing.

Andy Anderson you've got no idea about traffic engineering, have you Andy? And neither do any of the people who 'liked' your comment.

Heidi Kark - 44 minutes ago
Simon Trommestad I believe your example to be logically consistent with what I’ve said above- In that the death would still... View
Jonny Ivan - 3 hours ago
write this year off View
Joanne Mitchell - 6 hours ago
David Warwick and why did they remove the mask mandate two weeks before the first case while Sydney’s numbers were still cl... View
News 47