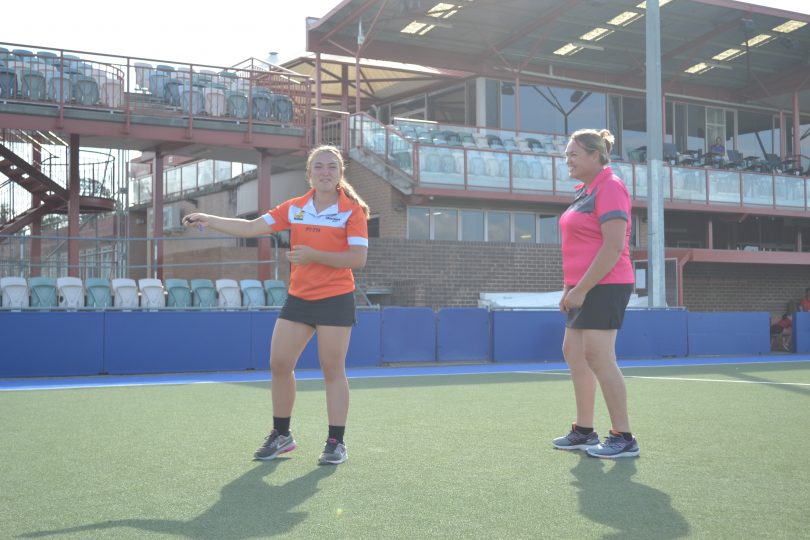 It’s quite rare to see a mother-daughter duo participating in the same sport or even playing in the same team, which is why working together in an umpiring program would seem out of the question.

But for hockey lovers Wilma Baines and Olivia Holgate, working together in a sport that they are passionate about is definitely something worth treasuring.

The mother-daughter duo have years of hockey experience among them, having played across a number of grades and even represented the ACT on multiple occasions. Umpiring just seemed like the natural next step.

For Wilma, umpiring particularly allowed her to ‘give back to the sport’, and working alongside her daughter Olivia in the Hockey ACT Joeys Program has simply been a bonus.

“Like most people, I started umpiring because it was a job that needed to be done and I wasn’t good at saying no, but seemed to be good at controlling the game with a whistle. It grew from there.

“It’s a great honour to [now] be able to mentor in the same program as Olivia. She was starting to get a little critical of the umpires so I encouraged her to get out there and umpire so she could understand what it was like.”

Umpiring is definitely a tough gig in a sport like hockey, where emotions run wild and drive and determination is everything. With 28 years of umpiring experience under her belt, Wilma attests to this but remains positive and encouraging for younger umpires.

“You can really be challenged in difficult circumstances and it can test you …how you handle things. People are often passionate about their sport and on the very rare occasion, some people do lose their perspective.

“I definitely think umpiring is not for everyone, but if you have a passion for the sport and think you can contribute back to the sport, umpiring can have some amazing benefits.”

One of these benefits includes working with her daughter to mentor younger umpires in Hockey ACT’s Joeys Program. This program aims to pair experienced and qualified umpires with youngsters, to help build and develop their umpiring skills. As part of the training process, the young umpires are scheduled to umpire games in the junior competition with feedback provided afterward by their mentor.

For Olivia, the Joeys Program initiated her umpiring journey.

“I had always grown up around the hockey centre and I always looked up to my mum, both playing and umpiring, and it wasn’t until I was about thirteen when I decided I really wanted to start umpiring.

“Mum knew that the Joeys Program was a great development opportunity and we decided to sign up. I decided to participate because I wanted to learn how to umpire and the ability to control the game.”

While having learned so much from her mum, Olivia does admit that being a young umpire comes with its own challenges.

“…not everyone is tolerant of learner umpires [and] because we are young, we often are considered inexperienced.”

But this doesn’t stop Olivia from getting out onto the pitch as a junior umpire as she loves that it enables her to ‘experience a different point of view of hockey’, and one that you simply cannot acquire as a player.

Wilma is very supportive and proud of Olivia’s umpiring, stating that Olivia ‘has the potential’ to take umpiring further than her mum. She also rejoices in Olivia’s success winning the Female Umpire of the Tournament at the York Cup in Tamworth last year.

But Wilma is also aware that these are rewards that come with hard work and dedication. She explains that mentoring young umpires in the Joeys Program is all about giving the support that will allow umpires to reach particular goals.

“It will be great to watch more of our juniors develop into National and International Umpires. We have some talent coming through and the development program will accelerate and increase the depth of umpiring in Hockey ACT.

“I was lucky enough to have an umpiring Coach- Pat Bill, and lots of support from Joe Henstock and many others and thought it was time that I gave back to umpiring. I was given lots of opportunities for development and travel, which was greatly appreciated.”

As Hockey ACT’s only mother-daughter umpiring pair, Wilma’s and Olivia’s future ambitions sadly includes taking their umpiring in separate directions. Wilma is happy to remain a mentor for young ACT umpires while Olivia is seeking to broaden her experience by umpiring the New South Wales State Competitions.

While looking to take separate paths, both Wilma and Olivia have high hopes to umpire a Hockey ACT Grand Final match together as an umpiring pair later in the year.

Shirley Willis - 3 minutes ago
Sandra Zahavah Whibberley If you check my comment I DID NOT say that you vented a poisonous attack.I said it appeared the “... View
phydeaux - 9 minutes ago
Robin Bontjer, because he did not donate $4M. It was $25k, after a push from Sharapova who donated that then tagged him to ma... View
Jonny Scott - 20 minutes ago
Robin Bontjer ones good can all be canceled out when your true colors come out! View
Business 6