My Grandpa and Voluntary Euthanasia 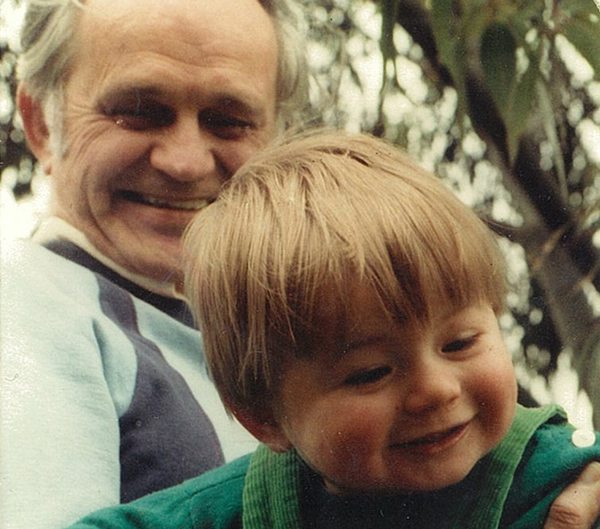 On my desk there is a photograph of my Grandfather and me at the age of one. He is holding me in his arms and smiling down at me with that unique union of love and joy that only the innocence of young life can inspire. My Grandfather, John Bailey, had three daughters yet in the hope of one day having a son he kept in his heart the name Steven. And, as a result of my biological father not really being present in my life, I suppose he did have a son, in the form his first grandson named Steven John Bailey. It was inevitable that Grandpa and I would share a life lasting affinity for one another.

Grandpa shared with me his love for piano music and he taught me to play pool. He was a self- taught linguist who spoke over ten languages (and many of their dialects). As a child I would often open a rather large dictionary and test his vocabulary. He would know the meanings of words he had never heard before only because he could identify the Latinate or Greek syllable. During his long afternoons of sitting in the sun he would explain things like why it was important to maintain a low inflation rate, and how the Left’s approach to industrial relations was a communist conspiracy – with a twinkle in his eye. We didn’t agree on everything, but agreeing wasn’t the point. The point was to share one’s life while one had it.

One night, a few years ago, Grandma called me and said that she I thought I’d better come to Adelaide. I booked the next flight and was in the hospital the next morning. His frail and pained body managed to muster some semblance of that joy he held when I was a child in his arms. Grandpa had suffered a terminal illness for his entire retirement, and I was told that he had hours to a few days to live. As the hours continued more family arrived, and luckily I was allowed to stay by his side on his last night of life. Very few words were spoken that night but as our eyes met between his sleep and our pain – words didn’t really matter – which was rare.

There came a time when the nurses informed me that they were going to administer a high dose of morphine. I objected as my mother had not yet arrived from interstate and I knew that he would have endured any pain to see her once more. I instructed the nurse to give him a third of the dose that was in the syringe. The nurse obliged, and Grandpa was able to see and speak with my mother one last time.

When the pain and discomfort became too much he was administered the remaining morphine. We closed in around the bed.

I felt his hands that once played Chopin waltzes slowly releasing their grip on mine whilst, equally, my grip increased in vain defiance. And as he drifted away I imagined the languages leaving his beautiful mind to lifeless yet exhausted matter. I imagined, and hoped, that he could hear us telling him that we loved him, and that we always would.

I never want to be euthanised, regardless of the pain, and I’ve told my family this. That is my choice, and one day I may have to live with it. I once opposed voluntary euthanasia but now I support it. I support a person’s liberty to choose. For the people who say that it’s important not to confuse emotion with reason, I say this: emotion and reason are not mutually exclusive. Emotion and reason need one another; indeed emotion and reason cause one another.

It’s time for the Andrew’s Bill to be repealed, and for the ACT to make her own judgements on voluntary assisted dying.

Good article Steven. My father died on June 17 this year. A fine man, sorely missed. His death was made dignified by the excellent nurses in the palliative care unit. Without their understanding and practice of good pain relief his final days would have been spent in agony. My mother, his wife of 52 years and his 5 children were able to be with him, talk to him and support him on his final journey. This was just as important for us as it was for him. It was a good death.

For all intents and purposes euthanasia already exists and has done for a long time. In my father’s case and your grandfather’s case when the chronic nature of their condition combined with the administration of appropriate pain relief speeds up their inevitable death this is a reality.

What concerns me though is when the concept of euthanasia moves beyond terminally ill people to people with mental illness,people who perceive they have no quality of life etc.

Suicide for these reasons is tragic, but it is a personal choice. Euthanasia should never, under any circumstances be extended to circumstances such as this.

When I was in my mid-teens, my grandmother sat me down for a serious chat. She made it very clear that she and grandpa did not believe in being kept alive by machines. They wanted to die with dignity. The instructions were to take a pillow and hold it over her (or grandpas) face and hold it down until they were dead. This was the first time I had considered euthanasia as something other than doing a kindness for a suffering animal.

Fortunately, both of them went out with dignity and on their own terms. I like to think I would have done it no matter the legal or moral consequences … but fortunately was not put in the position of having to find out for sure. My other grandfather, on the other hand, died slowly and in terrible pain from cancer.

Me? My wife knows to pull the plug. Would she do it? I doubt it very much. But at least she knows that I want my organs to be donated – hopefully to people that can put them to better use than I have.

Vindalu + 1.
I am 100% certain that if ever euthanasia is legalised that it won’t be made compulsory.
For all the do gooders opposing for what ever cr%p reason, that means YOU don’t have to take part.
Live and let live. No wait….

I don’t know where you’ve been for the last decade dungfungus but this practice of terminal pain relief is universal. It’s really a matter of semantics. Euthanasia is an emotive term but pain relief is acceptable. As for those wowsers and opponents of the right to choose – a pox on you, but not a very painful one.

While I am sorry for your loss I don’t think it was wise to reveal the actions of nursing staff in his last hours of life.

Johnathan Davis for Brindabella - 34 minutes ago
I understand what you’re saying Neil. As keen as I am on light rail, I appreciate it won’t happen over night. That’s wh... View
News 1

Capital Retro - 18 hours ago
That's the way it used to be but that is now part of the cancelled culture. View
HiddenDragon - 19 hours ago
"Mr Dubey had apparently gone off message during campaigning..." Could be interesting - we all know what happened in Oxley in... View
News 57

Georgie Newhouse - 19 hours ago
Colin Ball whats the bet it wont happen View
Steve Gannis - 20 hours ago
Wow are they serious!! View
Martin Silsby - 23 hours ago
Once again, developers seem to get around pesky traffic issues or parking requirements. Gungahlin is a nightmare already of a... View
Community 13

Ziggy Zangl - 22 hours ago
Chelle Belle... Did you find the cheapest Skip? I need one.... View
show more show less
*Results are based on activity within last 7 days

A group of religious schools are accusing ACT Chief Minister Andrew Barr of using COVID-19 health regulations as a cover...
*Results are based on activity within last 7 days

@The_RiotACT @The_RiotACT
Planning and development are becoming increasingly contentious in Canberra, a perfect example being Geocon's eight-story development at Kingston https://t.co/kihP8Ewa7V (5 hours ago)