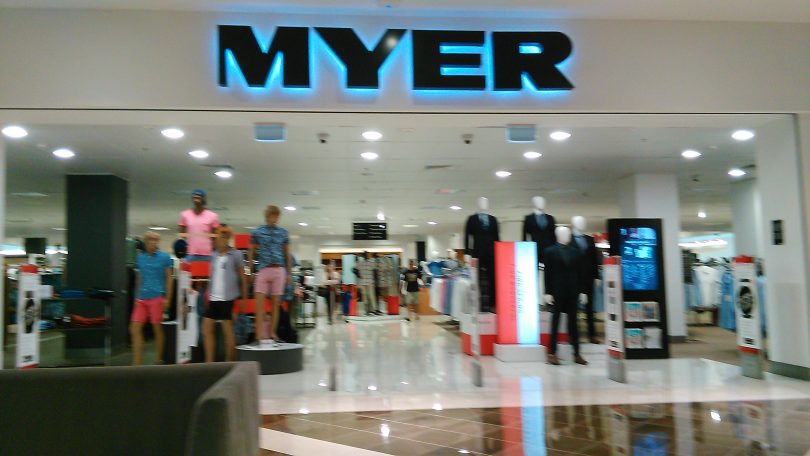 Myer has announced that its Belconnen store will close in 2019 when the lease expires as part of a strategy to reduce its store footprint and focus on what it calls a ‘a more innovative and experiential retail offer’.

The shop assistants union said about 60-70 full-time, part-time and casual staff were affected and it hoped to work with management on redeployment, given the lead time and that the agreement had a provision for no forced redundancies.

SDA NSW/ACT branch secretary Bernie Smith said there may be some who wished to take redundancy but the union would work with the company to minimise the pending closure’s impacts on members.

A spokesman for Myer said the lease at Westfield Belconnen expired in mid-2019 and the company would now embark on the process of negotiating its exit from the centre with the landlord and consulting with staff, with redeployment the first option.

Only one Myer store will be left in the ACT, at the Canberra Centre, after Belconnen closes. The Tuggeranong store closed in 2012.

He said a decision on final trading date would not be made for some time. Staff were told about the decision Wednesday night and yesterday morning.

He said it would be wrong to connect the closure with the company’s 2017 full year result, in which it recorded a full-year profit of just $11.9 million, down 80 per cent on the previous year.

The move was part of the company’s long-term strategy decided on two years ago.

“When the strategy was first announced it was made clear at that time that there was an element of the store footprint that wasn’t fully aligned with the strategy,” he said.

About 20 per cent of Myer’s stores had been identified for refurbishment, reduced floor space or closure, and that process was ongoing.

Stores have already closed at Wollongong, Brookside in Brisbane and Orange, with Colonnades, Belconnen and Hornsby yesterday slated for closure.

Myer Chief Executive Officer and Managing Director, Richard Umbers said that since the launch of New Myer in September 2015, the company had closed or announced the closure of 74,670m2 of store space overall.

“We have made significant progress to deliver New Myer which has assisted the company to withstand the challenging retail trading conditions characterised by heightened competition, subdued consumer sentiment and discount fatigue,” he said.

He said Myer had become a leaner, more productive and efficient retailer, better placed to compete in a rapidly changing environment.

“In the year ahead we will be rolling out further initiatives particularly in our strongly performing omni-channel business in anticipation of a further wave of change in consumer and competitor behaviour,” said Mr Umbers.

Underlying earnings — excluding one off gains and losses — were $67.9 million, down 2 per cent, while sales revenue fell 1.4 per cent to $3.2 billion.

Mr Smith said it was disappointing to see Myer reduced to one store in the ACT from three but he did not fear for any other big retailers in Canberra.

“Change comes to the industry but we can’t see why department stores can’t remain a viable part of the industry,” he said.

He said the best thing for retail as a whole would be a decent pay rise across all industries. “That’s what will restore consumer confidence,” he said.

Interesting to see which Myer stores are closing down, as I think they reflect a big shift in our economies. All of the stores named above are either outer suburban or regional. The common theme here is that many of these places no longer have the buying power that they used to as our economy changes.

I’m not saying this is fair, equitable, or anything else. But what I am surprised about is that Myer (and presumably other retailers) haven’t seen this coming. Rolling out suburbs, plonking new shopping centres in them and then expecting them to do well is a 1960’s-era recipe for economic development. If these areas don’t otherwise have an economic base, then it stands to reason such debt-fuelled expansion will fail.

Australia’s top 20 ASX200 firms are roughly the same as they were 50 years ago. Many of America’s top 20 listed firms didn’t exist 30 years ago. That should be telling us something about the lack of dynamism in our economy. Maybe it’s time we woke up to the idea that growth depends upon more than property, retail and hospitality….

I think the paid parking keeps spending in all the shops down. I always make sure I am out well before the two free hours are up. If three hours were free then I would stay an hour longer and certainly be spending money. As it is, I only drop into Myer to browse when I have done everything else so usually no time for browsing.

Meh! I think the days of department stores have been numbered for ages. Physical stores need to find a niche to specialise in and do it really well to be successful. Stores like Myer are sort of a bit of everything, none of which they do particularly well. Plus the store at Belconnen has been pretty crappy and rundown for years.

Bit sad to see the original ACT Myer go, but frankly the Belconnen store has been a discrace for years.

Less that 12 months ago we are told how great business is in Canberra: https://the-riotact.com/act-economy-booms-to-nine-year-high-anz/187133 and Westfield Belconnen is by far the busiest shopping centre in Canberra after the Canberra Centre.
It’s a bad omen.

Karen Hardy - 1 hour ago
Helen Stafford WHAT DID I TELL YOU View
Acton - 11 hours ago
I use a trap which is effective in catching individual wasps and discourages nesting. The trap uses a European wasp attractan... View
Community 5

Michael Ilsley - 9 hours ago
How lucky are those children going to be being taught by such an incredible person. View
Rhonda Maxwell - 13 hours ago
Brad is an amazing young fella who is living a full life. His family and friends are s wonderful support as is his footy team... View
Pam Perkins - 13 hours ago
A very inspiring young man all the best in all your future endeavours and wonderful community support... View
Community 11

@The_RiotACT @The_RiotACT
Local sport survives thanks to the dedication of volunteers. After decades with @NetballACT, including helping it survive insolvency in 2017-18 and then COVID-19, Louise Bilston has called time - although the passion remains https://t.co/uWx1fICLyo (54 minutes ago)