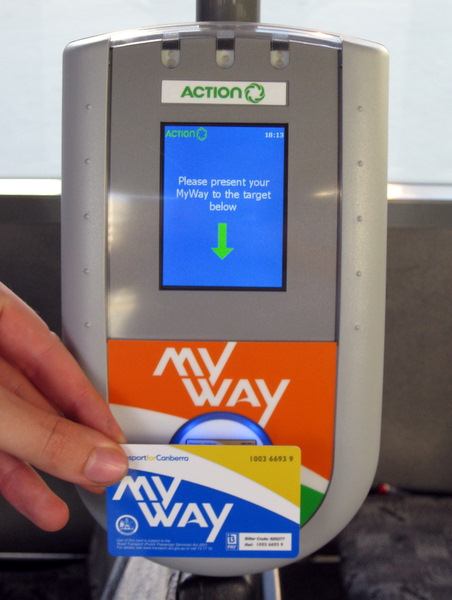 Transport for Canberra’s long-awaited MyWay ticketing system was launched today, but you could be forgiven for not noticing.

When the Nightrider service ended on the last weekend of February, one of the main criticisms was its lack of promotion. So the lack of promotion thus far of MyWay seems like déjà-vu all over again.

There have been many press releases and media interviews regarding the new system as well as articles in the RiotACT and ACTBus.net, but where is the advertising? The most obvious place to advertise a new bus ticketing system is on the buses themselves. But apart from a few brochures in the buses, actual advertising is nowhere to be seen.

The Redex bus service which commenced in November 2009 is a perfect example of how to advertise – nearly every bus in the ACTION fleet had an internal advertisement for Redex and many also had external ads. There were also radio ads to further promote the service.

There has also been next to no social network promotion. On Twitter the only official mentions have come through @TAMSmediaroom with unofficial promotion from @ACTBus and @ACTION_Buses; while on Facebook, MyWay has no official presence: there is only an unofficial MyWay page and promotion from the ACTBus page.

So what more needs to be done to promote MyWay? Here are a few thoughts:

UPDATE: This in from Transport For Canberra:

Note that prior to the publication of this article, the ACT Government had already organised
advertising through RiotACT to run until April. This advertising is part of a comprehensive communication campaign which includes radio and print advertising, various flyers that have been on buses for several weeks, messages on TV screens in buses, staff visiting bus stations for the last two weeks, displays at places like the Royal Canberra Show and outside the Canberra Centre, a dedicated website, posters at recharge agents. Posters, including tag off reminders, are also being installed on buses throughout the transition period to MyWay.

The next MyWay roadshow visit is City Walk outside the Canberra Centre on Thursday 10 March 2011 from 10 am to 1.30 pm.

For more information check the website at www.transport.act.gov.au or call 13 17 10.

Why does MyWay need to be promoted? It is a mandatory ticketing system, not a product that needs buyers. If you hadn’t noticed the flyers, brochures, adverts, or the tagging machines on the buses then you need to practice less ostrich-like tendencies, or turn off your iPod and take in what is going on around you.

I am surprised that there has been little discussion on the fact that if you don’t tag off you get charged $4 rather than $2.52….

“A condition of travel using a MyWay card requires passengers to tag on and off the bus. This process provides valuable travel data to better plan bus services. Following a transition period until 30 June 2011, if you do not tag off you will be charged the standard cash fare for the trip ($4.00 for adults and $2.00 for concession).”

If you are a regular bus commuter & you dont know that Myway is coming in then you must have your head in the sand. It has been advertised on the TV’s in the newer buses & as Eirlys said, with the failing magnetic strip system giving so many propblems for so long it would be hard not to know.

As soon as I heard that the new system would require passengers to ‘tag off’, I assumed — as you would, yes? — that there would of course be prominent signs in every bus reminding passengers: ‘Don’t forget to tag off!’. But…nothing! If they can’t even do the bleedin’ obvious, not sure what hope there is for the more challenging stuff.

I catch the bus everyday. Over the last few months ever person using a paper ticket has had a free ride, because the old ticketing machines are going caput, and flashing beside these machines have been a bright myway machine. They have been handing out flyers, and if you saw the line in the myway office in Civic this morning then it would be hard to think it needed more promotion. That being said, it would be good if they did have posters up in the buses. But surely given the free rides, the new machines and the information being handed out at the interchange (I speak only for Civic, so I am sorry about that) a person would have to be at least aware of a new system, aware enough to want to look it up.

As I got off the 300 today at Civic there was women waiting at the bus door handing out myway pamphlets yelling “myway starts today”. I ignored her so I could get my bike off, besides which I have 2 paper tickets and I won’t be able to cash those in until April apparently so there’s no point getting one yet.

About as good as the Night Rider promotion, huh?

Would also have been an idea if the Belconnen MyWay office was actually open… Or at least have an ACTION rep at the Belconnen interchange!

Eddie Xia - 2 hours ago
Those trees are not that extremely danger at all. Otherwise it should be long gone when flooding and bushfires were there. View
What's On 6

Marga Varea - 3 hours ago
Nice article! Hope many people will be able to watch the film on Friday! View
Community 11

Bek Clark - 4 hours ago
Yeah, like the highways leading from coal mines to port. Fun times. View
Robyn Holder - 6 hours ago
So many they are struggling to keep up esp when some weeks it hardly stops raining. You can't fix them wet. View
Mike l'Pirate - 8 hours ago
Nada Krstin the big issue is it generates a vast difference in vehicle speeds between 20 and 60kph. Differences in speed and... View
News 7

TimboinOz - 7 hours ago
Wowww! What a lovely story.... View
Community 4

George Watling - 7 hours ago
I have serious doubts about this micro-forest method. Lots of claims are being made about its benefits but there is no scient... View
Business 1

Capital Retro - 8 hours ago
What are the tax implications of these schemes? They are being marketed as commercial in spirit to deal directly with distrib... View
Community 29

nickwest - 9 hours ago
I'm not sure about the politics but the rates increase is supposed to eventually replace stamp duty. The idea is to reduce to... View
News 11

@The_RiotACT @The_RiotACT
When Pansto the rakali was recently discovered in Queanbeyan, he had significant health issues, but now he's been nursed back to health by Wildcare volunteers and released into the wild https://t.co/wL38Yz9hAG (6 hours ago)

@The_RiotACT @The_RiotACT
Symphonies, country music, ceramics - there really is something for everyone this week. As always, check ahead before you go https://t.co/5ZSYZ1CzVr (8 hours ago)

@The_RiotACT @The_RiotACT
Planning Minister Mick Gentleman has stepped in to approve the Canberra Hospital expansion, but both the @CanberraLibs and @GreensACT have slammed the decision https://t.co/Y0hrUZoUE0 (10 hours ago)