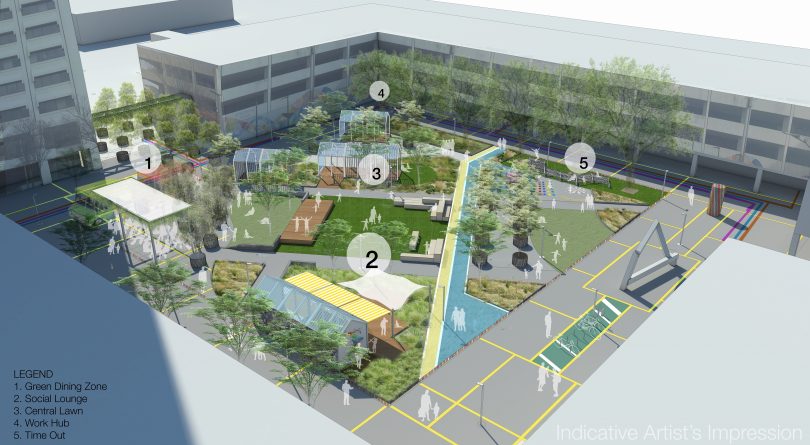 The concept design for the #WodenExperiment re-imagining of Woden Town Square. Image: Supplied.

Woden Town Square will be transformed into a re-activated space for performance, play and work under a new concept design released on Sunday (9 September), and set for a February-2019 launch.

The vision for the #WodenExperiment – a six-month place-making project and landscaping installation for the Woden Town Square – has five hubs of activity, each with their own focus, including a work hub, green dining space, community square, social lounge and timeout space.

Key features include a stage for community performances, outdoor offices, smart benches with phone and laptop charging, flexible table settings next to areas set aside for pop-up food and drink vendors, turf areas with sun loungers and even an outdoor table tennis facility.

Minister for City Services Chris Steel said that activating the central Town Square was the key next step in the Woden Town Centre’s regeneration.

“I am pleased to be able to release the #WodenExperiment draft concept design today and put out a call to the community for ideas and their involvement in creating a strong program of activation and events for the Woden Experiment,” he said.

“These spaces cater to diverse groups and will encourage people to pause and spend time in the square, rather than just pass through.”

The concept design was prepared by Context Landscape Design and informed by a Discovery Phase hosted by Street Furniture Australia.

“It responds to feedback from the community to improve the vibe of the Square, and create attractions of interest, shelter from the elements and places to eat,” Mr Steel said.

The Report on the discovery phase has also now been released on the Your Say website.

Mr Steel said that as a result of community feedback about the Square there had been a complete re-visioning of the space, and in order to achieve the best outcome for the project, the timing of the activation would now commence from February.

“We know the benefit of these type of activation projects, and like the #BackyardExperiment in Garema Place, they can draw people in, bring these places to life, and help inform permanent improvements to our public spaces,” he said.

“We’re also really interested to hear from people or organisations that are keen to curate an events program or who have ideas on how to activate the new spaces with events or other activities,” Mr Steel said.

Those interested in programming or running events and activities in the public space during the six-months of February to July 2019 can register their interest at www.yoursay.act.gov.au where the draft concept plan is also available.

If those buildings are a true depiction of the reality, then tear it all down, give a chimpanzee some crayons and stand back. I saw that locality from day 1, got no idea what’s happened since, but I know the style called ‘Canberra Bland’ when I see it.

I reckon the impact of the wind has reduced since the stairs went in, however there are also ways to mitigate it. There will be thousands of people in the residential towers to the north of the square and it would be great if they had somewhere to go that was active with shops, restaurants, bars and events. There are plenty of beautiful sunny days and we should support efforts to bring the square back to life. What is the alternative, leave it miserable for our kids?

The first priority should be getting rid of the wind tunnel there. Another task should be the demolition of that awful tower – the Hate-it Tower I think it’s called – which sticks out like dog’s proverbials and has been a blight on the landscape since it was built in the early 1970s. Also they can get rid of that ugly sculpture which is usually plastered with posters and graffiti.

I know that the absolute worst feature of the Square – that dreadful, rubbish filled fountain which sprayed freezing cold water onto anybody who came within a bull’s roar – was demolished 20 years ago, but something has to be done to get rid of the other barnacles in that area. For more than 40 years I’ve been walking through that square wondering WTF they were thinking.

John Moulis wrote, “The first priority should be getting rid of the wind tunnel there.”

What, and get rid of a wonderful opportunity to generate electricity 😀

How will anything work in the square with the perpetual gale that roars through there? I have never been there when it wasn’t blowing. What is needed in the square is a wind turbine. That would work there.

More lunacy from our government.

Also, anything that is associated with the “pop up” culture is doomed to fail.

Yeah, I’m gonna go out on a limb and say that this proposal is not going ahead.

If it doesn’t, something similar will and given the government’s obsession with high rise urban renewal it will be the same outcome.

Tina Maree Williams - 52 minutes ago
My other half and I saw the writing on the wall when the eyesore of Whitlam increasingly impinged on our view driving down Wi... View
Demi Naylor - 8 hours ago
Well.. you know.. f they can afford a house or find one suitable to rent.. View
Julie Macklin - 9 hours ago
Marc Edwards That can made it worse for public transport. It's okay for those living nearby, but for people in other parts of... View
Community 53

Successful Woden Experiment to extend into next year

@The_RiotACT @The_RiotACT
The Canberra Hospital Expansion project start is within sight. Will it deliver the goods, and on time? https://t.co/VlDl3D7QxQ (1 hour ago)