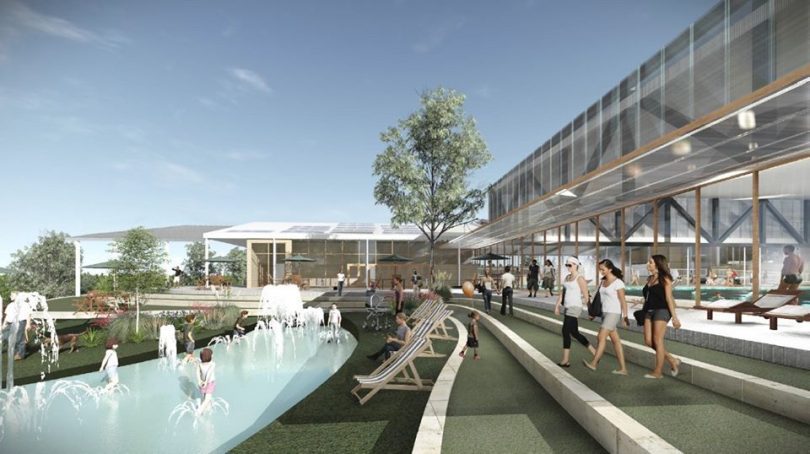 An artist’s impression of the new $30 million aquatic centre in Goulburn. Image: Supplied.

Preliminary works have begun on the $30 million aquatic centre redevelopment in Goulburn, the latest stage in the transformation of the historic city’s Victoria Park pool precinct.

Replacing the existing 25-metre pool with an eight-lane pool, the project will also include two new indoor pools, replacement of all amenities, including changing rooms, plus a cafe and new gymnasium.

“It has been a significant amount of work to get to this point, and I’m really pleased to now have appointed the construction contract for stage one of the redevelopment,” said Mayor Kirk.

“Preliminary works will now get underway, with a development application modification and early work construction certificate to be ticked off before construction begins in September.”

Mayor Kirk said the work is expected to take 18 months and is due for completion in April 2022.

“FDC has undertaken a number of aquatic centre projects and we look forward to construction getting underway.”

The council’s general manager, Warwick Bennett, said many benefits would flow from the upgrades.

“One of the exciting parts is we are opening up the aquatic centre to Victoria Park so people will be able to interact between the two facilities. You can sit there and your kids can go and have a swim and will be fully supervised by our lifesavers.

“At the cafe, people can look down at the rage cage [a multi-sports facility] and adventure playground. We are trying to make it an absolutely total community facility for the Goulburn people. If you couple that with the Japanese gardens we are building there, they are really fabulous.”

Mr Bennett said the council had engaged in extensive consultation with the youth of Goulburn on what new facilities they wanted. One of the outcomes was a ‘conversation pit’ at Victoria Park.

“Kids can just go and hang out, sit somewhere on their own, talk about whatever they want to talk about and be surrounded by trees which give a bit of peaceful ambience,” he said.

“We are not designing all the upgrades of Victoria Park for visitors; we are doing it for the Goulburn Mulwaree community to enjoy.”

Once site works begin, the existing indoor pool will be unavailable until completion of the project, including during winter of 2021.

To minimise this impact, the 50-metre outdoor pool will remain open for an extended period (September to April, COVID-19 restrictions permitting) although it will also be closed during the 2021 winter.

Oh yeah that pool I’ve been to once in 8 years, cool

Why are there no old ducks crying into their cereal about this but if the same plans were announced for the city it’d be a blood bath.

Darren Sault you guys look like maybe some fire engineering is needed. Call me I know a guy who can help 😁 haha

Brendan Rocha keep in touch with Zahra - he’s running with this one - he might throw them a bone..... 🙂

Darren Sault awesome! Will do!

Elizabeth Martin yeah I seen the plans. If it happens lol.

@The_RiotACT @The_RiotACT
Police have released photos of three young men involved in a dangerous vehicle burnout recently, and are calling for witnesses https://t.co/aHs03hxBN1 (23 minutes ago)

@The_RiotACT @The_RiotACT
Thinking of buying or renovating: A blindsided Andrew Barr has taken aim at the one-size-fits all approach of the Federal Government's stimulus package for the housing sector, warning it is too generous and may jack up house prices https://t.co/XgVdOjnX0o (51 minutes ago)