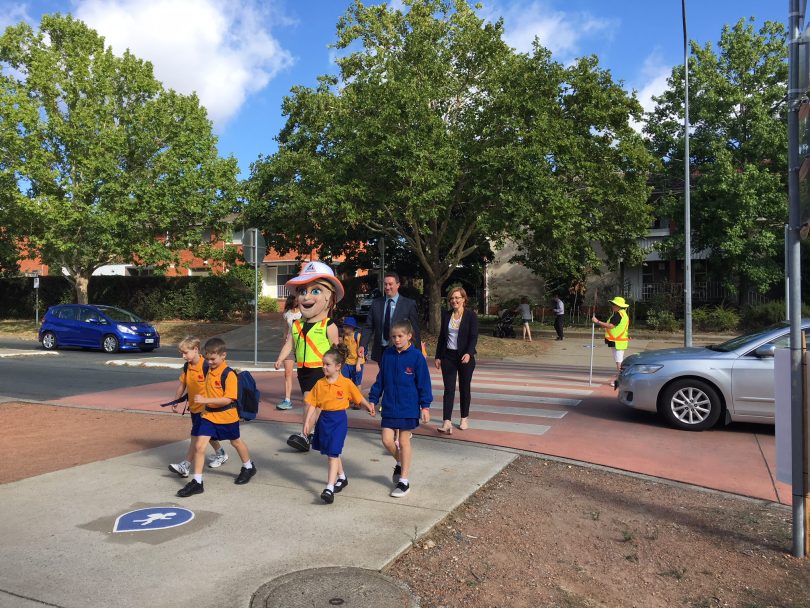 The start of the new school year last week saw parents relieved at the introduction of 20 school crossing supervisors in busy areas but police are disturbed at the number of motorists still speeding in school zones.

Schools such as Lyneham Primary School, which are located in areas with high traffic and pedestrian volumes, have benefited from the new crossing supervisors tasked with helping students cross the road safely.

However, concerns about school road safety continue with ACT Policing issuing 56 infringements to motorists speeding in school zones in the first week of school alone.

Offending motorists included one travelling at nearly double the speed limit outside Radford College in Bruce and another speeding to overtake a vehicle doing the correct speed outside St John Vianney’s Primary School in Waramanga.

Officer in Charge of Traffic Operations, Station Sergeant Marcus Boorman warned motorists that there is no excuse for speeding in school zones.

“It is simple, the faster you go, the less time you have to stop,” Station Sergeant Boorman said. “Children are one of our most vulnerable road users, often behaving in ways we cannot anticipate.

“The 40km/h speed limit provides motorists extra time to stop in unexpected situations, such as children running out between cars and onto our roads.”

Previous incidents or near misses at school crossings, challenging environments, and high traffic volumes were among the factors used to determine where to locate the new school crossing supervisors.

The program focuses on schools with infant, primary or special needs children and includes public, Catholic and independent schools.

ACT Transport Minister Meegan Fitzharris said feedback from the new program has been overwhelmingly positive, with principals, teachers and students loving the added safety and resources to keep kids safe going to and from school.

“It’s great that our school crossing supervisors have started at the beginning of the school term, at sites extending from Conder in the south, here at Lyneham and at Amaroo in the north,” said Ms Fitzharris who visited Lyneham Primary School yesterday to give an update on the rollout of the program.

“We know that parents often have some concerns around school zones and the school crossing supervisors are going to make a big difference to increasing the number of kids walking and cycling to school.

Lyneham Primary School Principal Annamaria Zuffo said the school is excited to have a supervisor working on the Brigalow Street crossing.

“Our school community was delighted to hear that Lyneham Primary School will benefit from a crossing supervisor, particularly given the high traffic in the area,” Ms Zuffo said.

“After just one week the parents and children see the supervisor as part of the school community.

“We hope it gives parents an additional assurance that their children will arrive safely at school each day.”

Ms Fitzharris stressed the need for motorists to be extra vigilant around school zones.

“Motorists should be extra careful when driving through school zones to ensure our most vulnerable road users, children, remain safe,” Ms Fitzharris said.

“I’d like to encourage the community to really embrace this new initiative, and for parents to act as role models for children by following their school crossing supervisor’s instructions.”

Click here to see a full list of the supervised crossings or find out further information about the program.

Do you think Canberra motorists take enough care around school zones? Are there safety problems at your local school? Let us know in the comments below.

Or queue on roundabouts stopping traffic

No, and their parents are the worst! They drop their kids off and speed off. Do not get me started on the double parkers/park on the crosswalk/drive over gardens parents grrrr

Yes. The crossings are safe compared to the people driving on paths we are supposed to walk on. Fix that and i will be happy.

Haha Janet I was thinking the same thing! Lollipop people have been in QLD for many years. They are the friendly faces for the kids. Get rid of the stupid masks, costumes, Canberra!

Why do we have to have a "supervisor" who is dressed up to look creepy and scary? a human would have done!

William Coats - 48 minutes ago
The land tax was to stop people “land banking” houses should be used as homes not stagnant investments View
Lea Powell - 6 hours ago
William Coats it takes time to change policy directions. It’s not as simple as a click of the fingers. View
Lea Powell - 6 hours ago
Kerry-anne Stafford appeal the decision. Why have they revoked it. Don’t take that lying down. View
News 5

@The_RiotACT @The_RiotACT
Did you know that it takes an average Australian 10 years to do something about their hearing loss once they realise they're affected by it? https://t.co/E4x3cUjwVr (34 minutes ago)