New tool shows how rooftop solar could save businesses millions 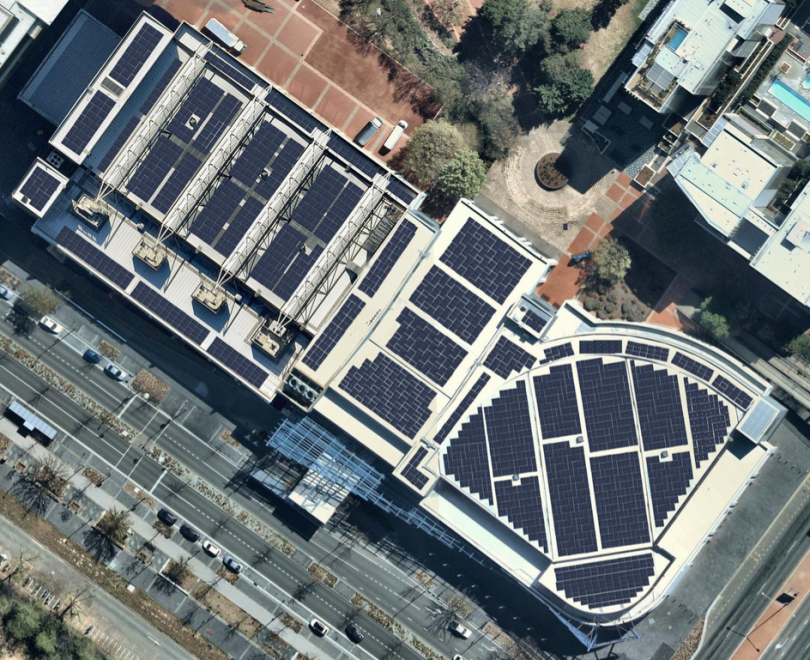 What the National Convention Centre would look like with solar arrays on its rooftop. Photo: Australian Photovoltaic Institute.

Installing rooftop solar panels could save Canberra CBD business $14 million a year, according to a new mapping tool developed by the Australian Photovoltaic Institute (APVI).

The APVI’s Solar Potential Map estimates the solar potential of a roof and how much electricity could be generated if panels were installed.

APVI Chair Dr Renate Egan, who was in Canberra to launch the findings of its mapping of the CBD at the Australian National University, said the data showed the huge solar energy potential for commercial centres – and the massive savings which businesses could be making.

The research also models how some of Canberra’s landmark buildings, such as the Canberra Convention Centre, could be transformed by rooftop solar.

Dr Egan said CBD rooftop solar could generate 68 gigawatt hours of electricity a year, with the $14 million figure calculated by taking into account the typical electricity price and feed-in tariff.

She said commercial solar was now the fastest growing sector of the industry. “Historically it’s been homes and residences and now it’s starting to grow in the commercial rooftop space,” she said.

Businesses had been slower to take up rooftop solar because it was not their core activity and they were unsure how to go about it, she said.

As well, they often did not own the building so the process involved negotiation with landlords, but the APVI was doing their best to demonstrate case studies and the economic benefits of rooftop solar.

Dr Egan said that if all the rooftop solar was installed in Civic that was possible it would generate between 12 and 17 per cent of all that was needed.

“It’s whole lot better when you get out of the CBD, where you would get 100 per cent if you were a warehouse in Tuggeranong or Fyshwick,” Dr Egan said.

She said that if a business or property owner wanted to invest in energy infrastructure, then solar or wind was the cheapest source, with the cost of maintaining 40-year-old coal-fired power stations and the poles and wires to deliver their electricity rising.

The APVI was keen to map the rest of Canberra as part of its ongoing program. Already it has mapped CBDs in Sydney, Brisbane and Melbourne, as well as some local government areas in Sydney. Bankstown, Byron Bay, Lismore and Townsville are on its list. In time it will move on to South Australia and Western Australia.

“What we aim to do is deliver credible information so that people have a reference they can go to to check information,” she said.

“We’re keen to work with as many councils, including the ACT Government, if possible.”

“Many businesses are not aware of the potential that is out there. Combine this with the battery program that the Government is supporting and you can make a very sensible economic decision to put solar on the roof, connect it to a battery and use the power when you need it, either directly during the day, or if you have such a large roofspace you can put the batteries in and sell it back into the grid at times when you may not be operating and you don’t need the power,” he said.

But he ruled out any further support from government saying that with a five to six-year payback period, it made good economic sense without any subsidy.

The ANU is currently installing 1,700 of its own “sliver-cell” technology solar panels on the rooftops of seven buildings around the campus, including 600 on the National Computational Infrastructure (NCI) building where the research was launched, that will reduce the University’s reliance on grid power consumption.

Dr Matthew Stocks from the ANU Research School of Engineering, said ANU was committed to reducing its environmental footprint by encouraging the use of clean energy.

To navigate the Solar Potential Map, users can simply zoom in and isolate a particular property and the available solar energy, annual AC output, annual dollar saving and CO2 offset are all instantly calculated.

Do you see Canberra as a renewable energy hub in the near future? Let us know your thoughts in the comments section below.

They should add an extension for calculating potential rainwater running off panels and other suitable materials (i.e. not asbestos fibre cement) for re-use in the building and/or gardens. Even if it's not 100% of their needs, generate own power + collect own water = win.

and car parks- put roofs on them and top them with solar panels, keep the cars cool and generate power - how much would we save then!?

This has been glaringly obvious for the last 15 years.

Andrea Mya Riboust - 15 minutes ago
Matt the former I assure you 😄 View
The Martini Whisperer - 2 hours ago
Lucky they’re weren’t in Texas. View
HiddenDragon - 5 hours ago
So the Big Merino will be the command HQ for Gilead Down Under - and they said it couldn't happen here......... View
Food & Wine 12