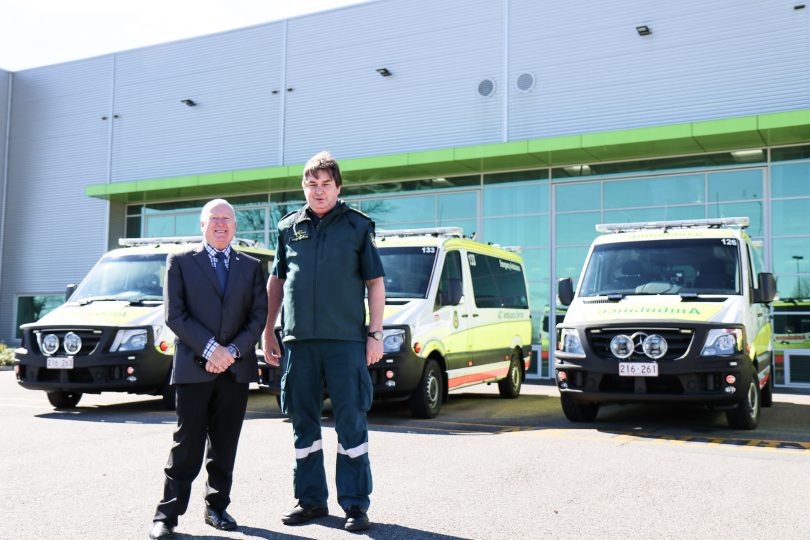 The Opposition had accused the Government of delaying by more than 100 days the release of data which shows that ambulances were working below their minimum crewing levels for 41.5 per cent of the time in 2016-17.

But a spokesperson for Mr Gentleman had said the data was complex and needed to be understood in context.

“The Minister has subsequently answered further questions about ambulance crewing, has committed to the recruitment of 24 additional staff as well as two new ambulances, and agreed to undertake a review of minimum crewing standards,” the spokesperson had said.

Those two new ambulances will join the fleet in November but on Monday (13 August) the five new ambulances, funded as part of the Government’s ongoing commitment to the ACT Emergency Service Agency (ESA) Vehicle Replacement Program, were on show at ESA headquarters at Fairbairn.

Fitted with electronic stretchers and power loaders to reduce physical demands on paramedics and improve patient safety, the ambulances are part of an ACT Ambulance Service (ACTAS) fleet upgrade under the Government’s $4.6 million 2018-19 Budget commitment to enhance vehicle capabilities over four years.

The stretchers’ battery-powered hydraulic system allows for much easier and safer carrying, and should reduce the likelihood of any injuries from loading patients into ambulances.

Three existing ambulances have also been retrofitted with electric stretchers and power loaders, while a further three ambulances that have been replaced, will be kept and maintained for use when demand on the service surges during peak times.

Mr Gentleman said demand on the ACT Ambulance Service was at the highest level ever and despite growing demand, the ACT had continued to record the best response times in the country over the past six years, as well as the highest levels of patient satisfaction.

The program to roll out the electric stretchers and power loaders to all ESA ambulances was well on track to be completed by 2020, he said.

Ian Hubbard - 5 hours ago
Remember the Ainslie bowling club. Great place to catch up with old friends for a beer and a bowl. Now residential. Community... View
Leah Dwyer - 15 hours ago
Yeah, braddon oval as a dusty car park. Those were the days. View
Ian Hubbard - 15 hours ago
Change is not scary but managing a community activities centre that brings the Nth Ainslie community together requires active... View
Community 4

Ben Roberts - 7 hours ago
No Anita but Romy is keen to travel up for it. She'll do anything for a book bargain. View
Anita Godley - 14 hours ago
Ben Roberts are u moving back here? View
Ben Roberts - 17 hours ago
What dates next year for Northside? View
Business 3

Peter Tregear - 12 hours ago
Yes, it does say something about the current government's national priorities, but it also says something about the Universit... View
Rauny Worm - 15 hours ago
There will sadly be a negative flow-on effect for the entire creative sector , and not just in Canberra. View
News 54

Natalie Gresham - 14 hours ago
🤬 the Liberals never learn do they. Let's just hope he gets voted out 😂😂😂 View
Christopher Goyne - 24 hours ago
great news View
Opinion 14

Nathan Stack - 23 hours ago
Harry Vallianos no its realy not, its pretty well on the money View
Neville Betts - 1 day ago
Lee McDowall I agree, the liberal National federal government ignore pensioners & self funded retirees. The kick those at the... View
Property 156

@The_RiotACT @The_RiotACT
CBR singer-songwriter Hedy Blaazer celebrates the release of her first studio EP this week. All the details of her show & plenty of others are in our latest #GigGuide https://t.co/qFsua3pban (33 minutes ago)

@The_RiotACT @The_RiotACT
After months of work by crafters worldwide, the Remake Christmas project is set to send more than 100 decorations to Cobargo and Quaama https://t.co/Fbnf4wE4rD (1 hour ago)

@The_RiotACT @The_RiotACT
Hot in the City: The Merchant’s Feast delivers a deli directly to your door https://t.co/ARj4mTkr7u (2 hours ago)