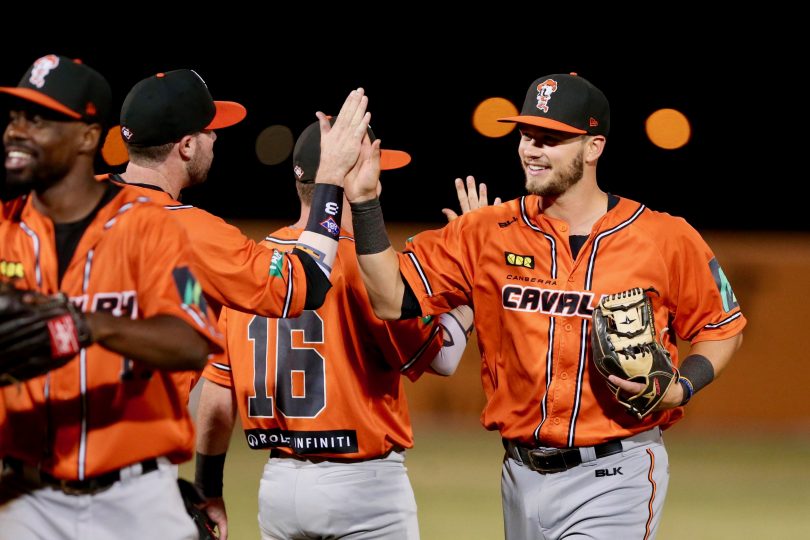 Baseball is back with a rescheduled season for 2020/21. Photo: Joe Vella SMP Images/ABL Media.

The Canberra Cavalry will have plenty of reasons to see out 2020 in style, with their first home series of a rescheduled season landing on New Year’s Eve at Narrabundah’s MIT Ballpark.

The Cavalry will go up against the Sydney Blue Sox in their opening home series of the 2020/21 ABL season, which has been shortened and re-scheduled by the Australian Baseball League (ABL) due to the COVID-19 pandemic.

The Cavalry will host three series in January as part of the new-look structure, competing within the Australian conference alongside Perth Heat, Melbourne Aces and Sydney Blue Sox across six weeks. 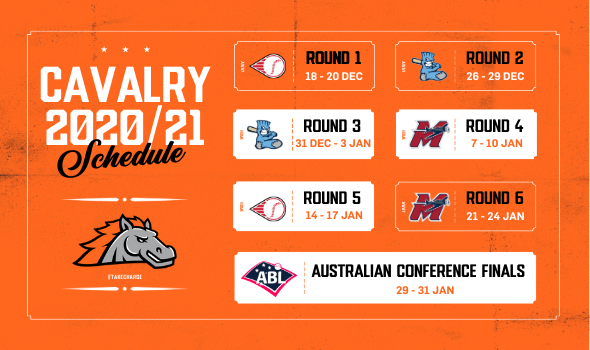 The Canberra Cavalry’s schedule for 2020/21 season.

An international conference is likely to be based almost entirely in New Zealand at Auckland’s North Harbour Stadium.

Auckland will be joined by Geelong-Korea, along with Adelaide and Brisbane also entering the New Zealand hub after playing each other home-and-away in Australia. An international team is also in the mix to join the conference as the fifth team in a nine-team ABL competition.

Baseball Australia chief executive Cam Vale said there had been strong interest from Taiwan and Japan, along with teams from Major League Baseball organisations in America, to be part of the ABL’s 11th season and possibly beyond.

The Australian conference sides will play home-and-away in Australia with no cross-over play between the two conferences until the playoffs. The games will continue with nine-inning contests and a traditional weekly series, while the international conference will play seven-inning games and start its season a fortnight later with a more condensed schedule.

Cavalry director Dan Amodio said that while there may be some adjustments for the fans, he expects the New Year’s Eve game to be one of the highlights of the Canberra summer.

“New Year’s Eve is going to be a night to remember at the Ballpark,” Amodio said.

“On a night where Canberrans may not be able to celebrate in their usual style, we’ll make sure we put on a show that will make MIT Ballpark the place to be to bring in the New Year.”

The Cavalry begins the 2020/21 campaign with a fortnight on the road, taking on the Perth Heat in the opening round of the competition on 18 December, before travelling to Sydney for the first of eight games in 10 days against the Blue Sox. 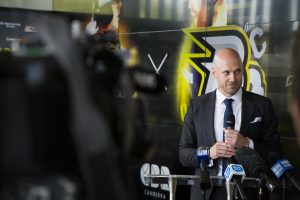 “January is going to be an absolute bonanza for Cavalry fans this season,” Amodio said.

“We have last year’s champions and wildcard finalist coming to town so we’re going to see some high-quality opposition go up against our Cavs.”

Despite the challenges surrounding COVID-19, Amodio believes the schedule provides the Cavalry with the best opportunity to get through the season unscathed.

“This schedule works very much in our favour as it mitigates some risk around any possible COVID-19 interruptions,” he said.

“The late start in December gives things time to get better in other states and territories, and we’ll limit our exposure at home by getting through the series in a three-week timeframe.”

READ ALSO Canberra makes another pitch to join the A-League

Baseball Australia chief executive Cam Vale said an innovative approach was required to minimise COVID-19’s impact on the ABL and more widely the sport in Australia.

“Our hand has been forced by the pandemic but we’re really excited about the structure of the upcoming season and how it can shape the league moving forward,” Vale said.

“We’ve faced massive obstacles just to get to this point and our work isn’t done yet, but in front of us now is a really appealing model to work to.

“A New Zealand hub allows us to overcome the possibility a Trans-Tasman bubble will not be set up by our season to allow weekly in-and-out travel, which would have put a huge question mark over Auckland competing.

“This is our intention with the Auckland hub but, as is required during these times, we haven’t ruled out this hub being in Australia and need to explore that option as well.”