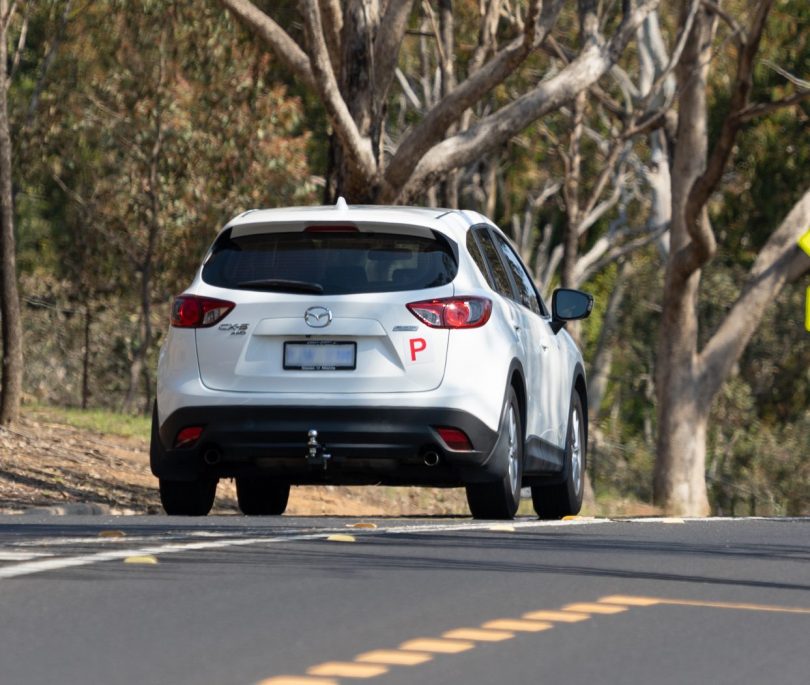 For many ACT learner drivers, they’ll have to wait before they can upgrade from an L to a P-plate. Photo: Michelle Kroll.

Frustration for one Canberra family quickly turned to annoyance when faced with a post-lockdown driving licence system they say is an unfair ‘double standard’.

Sarah’s* teenage daughter is ready to take her one-off driving assessment, except she can’t because Access Canberra isn’t currently letting anyone sit those due to health and safety concerns. This is despite the fact the ACT Government’s own Public Health Direction allows one-on-one driving lessons with private instructors.

Sarah’s also finding it difficult to get any answers from the government about when the tests will recommence, which she says is only adding to her frustration with the situation.

In the ACT, learner licence holders have the possibility of either completing a competencies-based assessment where an accredited driving instructor will both train and assess the driver or booking a one-off practical driving assessment with a Government Assessor.

Sarah and her daughter had chosen the latter option and, when she turned 17 in August, they booked the earliest test they could find in September.

When a large tranche of the ACT’s restrictions was relaxed a few weeks ago, driving lessons with private instructors were able to recommence, so Sarah booked her daughter into an hour’s lesson to allow her to have some practice after the lockdown period saw her complete few driving hours.

Leaving the house for driving practice was not one of the approved reasons for leaving home during the first, strictest lockdown period.

“As soon as they did lift, it was all fine and she was allowed in the car with an instructor and a mask on for an hour,” Sarah explained.

“So I contacted Access Canberra thinking that if other driving lessons were proceeding, their tests would also be going ahead.”

That was not the case.

READ ALSO: Strong community support for raising the age of criminal responsibility, although police say 14 is too high

A spokesperson for the ACT Government said the confined environment of a car, and being near another person for a period of time, creates COVID Safety challenges.

They said that more than 250 learner drivers had to postpone their assessment due to the COVID-19 lockdown.

However, Access Canberra is “proactively working through these challenges” and “final work is underway to enable the recommencement of ACT Government driver licence assessments” as restrictions ease further and the ACT’s vaccination rates increase.

Sarah’s now frustrated. She’s been in contact with various representatives from Access Canberra via email and through the phone system, but each time they’ve been unable to provide information about when exactly the service will resume.

“I was told they would contact us and it’s a bit of a ‘watch this space’ kind of thing. Even when restrictions changed for the second time, I got the same response,” she said.

Sarah did look into possibly changing to the logbook system, but it’s expensive and will be difficult as her daughter can already drive. To change systems, she’s been told she’ll be paying for multiple lessons and her daughter will have to essentially “go back to the beginning”.

The ACT Government spokesperson said for those who do not complete the competencies-based assessment, learner licences with an expiry date between 9 August 2021 and 31 January 2022 have been extended for six months.

READ ALSO: A day on the COVID-19 hotlines – what are your questions, Canberra?

It’s also not only people on learner permits who are affected. Some people holding particular classes of interstate and overseas licences have the option to undergo a one-off practical assessment to transfer their licence to an ACT one.

Region Media understands some people – particularly international licence holders – are finding themselves in situations where their overseas licence is expiring or has expired and it cannot be renewed from Australia.

The spokesperson for the ACT Government said in some circumstances, an international driving permit may be used in the interim.

Minister for Business and Better Regulation Tara Cheyne said, in response to a question without notice on Wednesday (10 November), that it’s expected driving tests will be able to recommence from next week.

Tuggeranong was closed on Friday, 5 November, and Monday, 8 November after staff members were “subject to unacceptable occupational violence, and repeated threats of personal violence, on Wednesday and Thursday last week,” the spokesperson said.

*Region Media has chosen not to publish Sarah’s last name.

Phil Hopkins - 9 hours ago
And Tim is absolutely correct View
Melanie Lindner - 10 hours ago
Instead of bidding on more sports, how about investing in our arts sector? Support so many of our citizens who did it extra t... View
assiduous - 13 hours ago
No. Higher priorities like affordable housing need to be addressed before such as this. View
News 17