A rendering of the Doma group’s plans for the Foothills development. Image: File.

Mr Mortimer says the site’s significance is bolstered by reports he commissioned from archaeologists at the Geological Society of Australia and Geoheritage Australasia, and materials collected in the 1930s and held in the British Museum. But there has been no investigation of the site’s Indigenous heritage since it was sold by the Commonwealth in 2002.

Local residents have also expressed concern over the size and scale of the planned development, which falls within the remit of the National Capital Authority because of its location. The Commonwealth has approved plans that would clear the site including rocky outcrops that Mr Mortimer says hold particular significance. 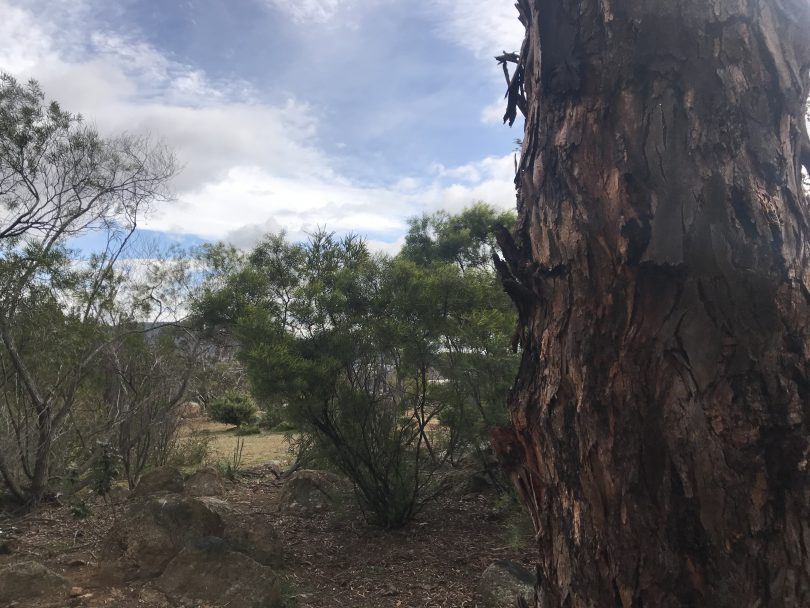 Dr Ed Wensing is a qualified urban and regional planner with over 50 years’ experience and has spent the past 25 years working with Aboriginal and Torres Strait Islander peoples around Australia on matters relating to land administration, land use planning, native title rights and interests, and statutory land rights schemes and heritage protection schemes.

He says the development exposes deep flaws in planning systems here in the ACT and around the country, which largely fail to take into account that this land was owned and occupied by Aboriginal peoples for many thousands of years.

Dr Wensing says that with the exception of Queensland, no jurisdiction provides sufficient protections for the recognition of Aboriginal and Torres Strait Islander peoples’ continuing rights and interests in land, regardless of native title or whether sites have been examined for heritage relics.

“The issues raised by Mr Mortimer highlight the fact that both the ACT and Commonwealth’s planning legislation relating to the ACT are seriously flawed when they come to the recognition of Aboriginal peoples’ rights and interests in the ACT,” Dr Wensing said.

“There are no specific provisions protecting the interests of the Aboriginal custodians of the ACT in either of the planning statutes governing land use planning in the ACT. This oversight in the statutes only aggravates situations such as the Doma site on the foothills of Mt Ainslie.”

He believes there is an overriding moral obligation to follow in the footsteps of Queensland planning legislation, which mandates “valuing, protecting and promoting Aboriginal and Torres Strait Islander knowledge, culture and tradition”.

Dr Wensing has called for an immediate halt to Doma’s development approval until the Aboriginal values of the site are assessed and development plans amended accordingly. He’s also asking for a public review of planning statutes.

However, he says folding the issues into heritage legislation is not the answer.

“We’ve failed to recognise a culture who lived sustainably here for thousands of years. Heritage legislation is not the solution. It steals control away from people who lay those traditional claims to ownership, and it enables the government to still have the final say.

“Our planning and land administration systems are not working very well at recognising and protecting Aboriginal peoples’ interests regardless of whether they have been formally recognised or not.” 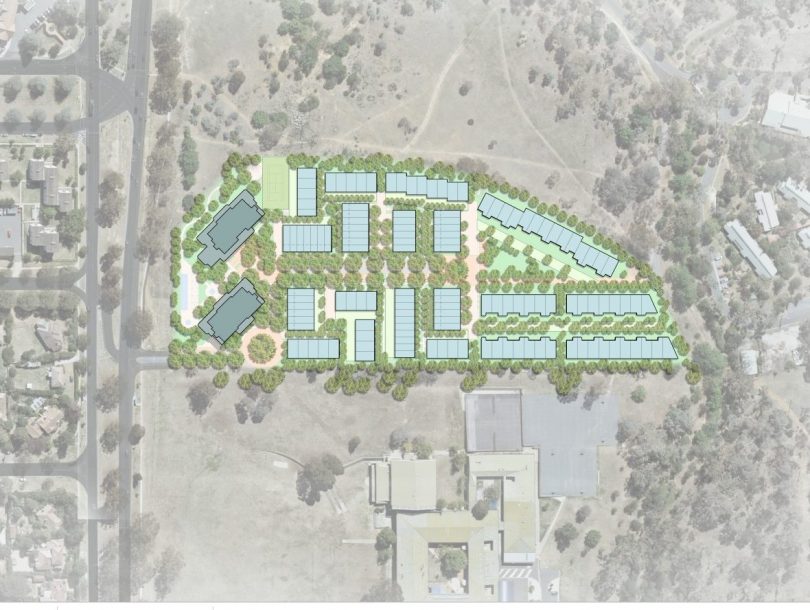 The masterplan for the Foothills site. Image: File.

Shane West, Professor of Building and Construction Management at the University of Canberra, says the site has multiple layers of significance and that the Ainslie Volcanics, as the rocky outcrops are known, were nominated but not accepted for ACT Heritage listing in 2012.

It was initially intended that the outcrops would be protected within the development zone, and Professor West says that during the CSIRO’s tenure, environmentally significant elements were identified including the presence of the golden sun moth, sunray daisies, and possibly spider orchids and button wrinkleworts.

“This was also the first quarry on the Limestone Plains … and it is the last remnant of grassland in contact with woodland and the mountain,” Professor West said.

An eight-story building development and tennis courts on the outcrops site were inappropriate for the foothills of Mt Ainslie, he said. Additionally, the planned extensive development was serviced only by a single bus route and did not comply with high-density regulations requiring proximity to shops and transport. Views of Mt Ainslie would also be impeded, contrary to the Griffin plan

“The NCA needs a major overhaul. Appropriate pathways have not been followed, in conflict with the territory plan for the area” Professor West said. “The Aboriginal significance must now be re-evaluated.”

The ACT should be an exemplar for the protection of indigenous cultural sites.

They are not interested in history or cultural significance only money 😫

The most optimal outcome could be achieved in cooperation with the indigenous communities, such as provisions of areas for reverence, plaques, signage or other commemoration in harmony with the development sites.

The optimal outcome would be to ignore these people pretending rocks are of cultural significance.

Simply wishful thinking because the people of the ACT habitually vote in a government that always favours developers over residents when building apartments on green spaces, irrespective of ecological, heritage or recreational importance.

Let’s have a citizens’ referendum on this. How about it, Chief Minister?

We can’t even have front fences. How is the NCA allowing a gated community? Disgraceful.

Come on. This is the ACT. Anything older than 5 seconds is considered to stand in the way of progress.

WHY wasn't this completed before the sale of the site??

chewy14 - 13 hours ago
And the m9ney is going to be completely used up in one day. Honestly, this is beyond a joke how incompetent the ACT governmen... View
News 18

Development approval will be reviewed for Doma’s Foothills project

Could a heritage listing protect Canberra’s character from destruction?

@The_RiotACT @The_RiotACT
More than 1000 Canberrans across six suburbs have been given the opportunity to change the look of their streets as part of a pilot forestry program. What trees would you like to see planted? https://t.co/dP9eU2Q2hq (1 hour ago)

@The_RiotACT @The_RiotACT
Steeped in history, this grand #Goulburn home is on the market for only the fourth time in 120 years https://t.co/ab9NLOo3yC (3 hours ago)