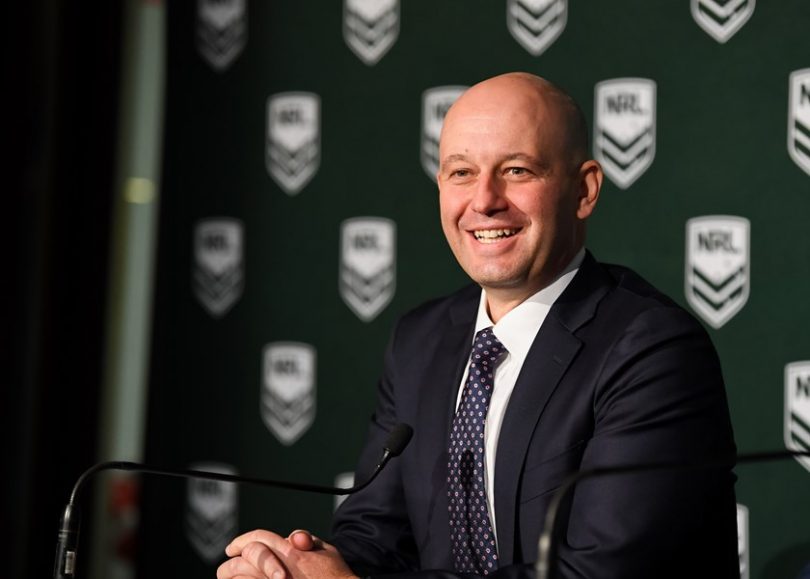 NRL chief Todd Greenberg said a new city stadium would be a great outcome for the NRL and the Raiders. Photo: NRL.

NRL boss Todd Greenberg said he will advocate for a new city stadium in the nation’s capital as the Canberra Raiders earmark a new stadium as their next major project.

Greenberg, who was in Canberra this weekend as part of his nation-wide tour of all 16 NRL clubs, stopped at the construction site of the Raiders’ Centre of Excellence to check on the progress of the Raiders’ new HQ in the heart of the city.

Though the ACT Government and Chief Minister Andrew Barr has been adamant that a new theatre centre will be built before the government pledges money to a new stadium, the Raiders have been strong advocates of a new stadium being built close-by to their new Braddon headquarters.

When asked about his thoughts on a new stadium in the city, Greenberg pointed to the 30,000 fans that packed out Bankwest Stadium for the opening game between the Eels and Wests Tigers last month as a sign of what a new stadium could bring to the nation’s capital.

“I am as keen as the Raiders are to see a stadium here in the city of Canberra,” Greenberg told reporters on Friday afternoon (24 May). “We have had great success with NSW Government and we have opened Bankwest Stadium and Allianz stadium will be redeveloped in the next couple of years.

“Next year we will open the season in Townsville with a brand new stadium for the Cowboys. We are in talks in New Zealand about stadiums for the Warriors and it is equally as important talking to Government here about the opportunities for the Raiders.

“Nothing would please me more than to see a rectangular stadium for Raiders fans here in Canberra. That is the subject that I have spoken about before and I will continue to advocate for the Raiders. It would be a great outcome.”

Greenberg said the opening of a modernised stadium in the ACT would not only be a boost to the Raiders and other sports teams that use it but also to the local economy. While he said the NRL will not commit money to the proposed stadium, he said there were a number of different ways they could support Canberra’s bid.

“As an example in Townsville, that was a $250 Government injection from Federal and state and our commitment to that was that a certain number of events would be played there,” he said.

“You will see Allstars played up there at some point as well as a Kangaroos and Jillaroos test match. These are the sort of events that bring enormous economic impact to Government. Last week we played Magic Round in Brisbane which created more than $20 million of economic impact.

“With new stadiums comes new content, which means new economic impact. This is why we are playing State of Origin in Perth this year. There will be 25,000 people travelling interstate to Perth and you can imagine what that would do to the local economy.

“That is why we are playing State of Origin game in Adelaide next season for the same reason.”

I don’t suppose the NRL or Raiders (or Brumbies) would be planning to put any of their own money into building such a stadium. You know, as commercial entities.

When you get the crowds, you can have a new stadium.
At the moment, it’s hardly worth building a new stadium to seat 8000 people, is it?

Rugby league and Rugby Union need to decide whether they want crowds to attend games, or a huge TV audience.

If you want people to the game, schedule the games for mid-afternoon in winter.
Obviously, then people wont be able to see, (and bet on) every game “Live”, so you’ll loose a lot of revenue.
But you’ll get bums on seats.

Of course, if you do choose to build a new stadium, make it 6000 seats, so at least it looks crowded.

And parking isn’t a problem. Poor public transport is the problem.

We don’t need a new stadium in Civic. We need a Gladys-style solution combined with what the AFL did with Marvel Stadium at Docklands. A completely new stadium where Canberra Stadium is now with a roof, air conditioned and heated inside with a multi-level parking station nearby.

Without those things we are just whistling in the dark.

There’s 30,000 car parks in Civic and games won’t be played in business hours. Parking definitely won’t be an issue.

The opportunity to have a nice feed and good beer then walk with the crowds to the stadium generates a great game day experience.

Whether a stadium is the best use of funds needs to be determined. Would it be a higher priority than health, education and disability services, light rail extension, bus based public transport, a convention centre, additional social housing etc. I suspect, subject to confirmation by analysis, it would be a superior project to the unnecessary and wasteful light rail extension.

I think he is dreaming if he thinks regular crowds in Canberra could emulate the 30,000 one of the new Bankwest Stadium recently.

Samuel Gordon-Stewart - 4 hours ago
It should be noted that 2CA is not, as described in the article, a commercial talk station. It is a music station. 2CC is cor... View
Nicholas Love - 7 hours ago
Chris Olsen I appear to be the person that listens to 2ca? Not many in my age bracket it would seem 😎 View
Kat Rothwell - 7 hours ago
Y'all just beige View
Opinion 61

If ever there was momentum to justify building a new stadium in Civic, it is now