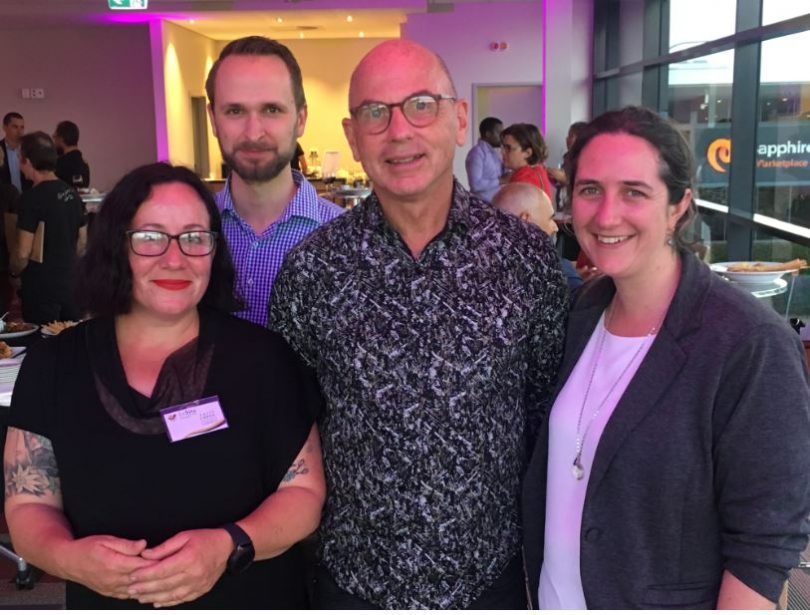 Two nurses with a passion for aged care have thrown in their jobs to become digital entrepreneurs dedicated to empowering people as they age or face the end of their life.

“We are two nurses out of our comfort zone,” laughs Rebecca Glover, co-founder of ExSitu.

Rebecca and her business partner April Creed have over 45 years combined experience in aged care, most recently with the Illawarra Retirement Trust (IRT), and while Rebecca talks about being uncomfortable at times in her new digital world, the history and deep commitment both women have for people drives them forward.

After winning a workplace innovation challenge with IRT, Rebecca and April became residents in the iAccelerate program run by the University of Wollongong out of their Innovation Campus at North Wollongong.

“We are helping the care industry to deliver true consumer-directed care,” April says.

Through their web-based app, April, who has strong links to Narooma and Bowral, and Rebecca, who is born and bred in Wollongong, are wanting to empower those involved in the care industry and the people they are tasked with looking after.

It’s work that comes amidst this year’s Four Corners investigation into the failings of the aged care industry and the subsequent Royal Commission into Aged Care Quality and Safety announced by the Prime Minister in the days after the TV program screened.

“ExSitu is all about empowering people’s core values,” Rebecca says.

“It starts with the really simple idea of enabling conversations to really find out what people truly want and then allows the care to be delivered around that.

“We have built a web platform to make that easier and record people’s wishes.”

April believes ExSitu gives a voice to people who are otherwise vulnerable and better allows aged care providers to meet the new regulations.

“How on earth do families make decisions if they can’t speak to you?

“We are providing the tool that records that information ahead of time in conjunction with family.”

Drawing on their experience with people in care and those managing aged care facilities, Rebecca and April have been overwhelmed by the response of people involved in trials of ExSitu.

“I have not felt a more powerful emotion than sitting next to a person and watching her use the platform and feel powerful,” April says.

“Writing things down in her own words like – I don’t want to be a vegetable.

“Frail, scared, vulnerable people who can control what is going to happen to them and what is important to them.

“Families are liking it, doctors are signing the forms, the feedback is powerful.” The Bega Campus of the University of Wollongong, home of the Bega Valley Innovation Hub. Photo: UOW.

ExSitu, meaning offsite conservation, also records the little things that make people unique; the parts of a person that so easily get forgotten in a busy care environment – people’s favourite foods, colours, and clothes, even Spotify playlists.

“We want people to talk about death with as much planning as they do birth,” April says.

“We ask things like – Is there anything you’d like to say to your family if you didn’t get the chance to say goodbye?”

Rebecca says, “This is more than just about the tough clinical calls that need to be made in the middle of the night.”

Some of the feedback so far includes; “It’s [ExSitu] giving people a voice. If I were to end up in a nursing home and someone looked at this document, that would be me. That is me in a nutshell.” And, “ExSitu will really make a difference to our customers. It gives us the evidence we need that we are giving our customers what they want.”

April and Rebecca are still testing some aspects of their business within the support of the iAccelerate program, however, ExSitu is available now for people and professionals to use.

“We have the care, we have the history, we are looking to scale up that impact,” both nurses say, finishing each other’s sentence.

Head to the Bega Valley Innovation Hub website for more information about the iAccelerate program.