A 20-year-old man has been jailed for family violence crimes. Photo: Michelle Kroll.

A woman was putting on make-up in her bedroom when her on-again-off-again boyfriend went to her house and started to assault her before threatening her cat.

Court documents show when the man arrived at her north Canberra home in June 2021, the two argued about their relationship before he shoved her onto a bed and pushed her face into the pillows while crushing her neck, stopping her from breathing and causing her to fear for her life.

He dragged her off the bed by her hair and punched her in the face. The man saw the woman’s nine-year-old sister standing outside the bedroom door, crying as she watched them, so he closed the door.

He stole the woman’s bank cards and passport, then asked her for her mobile phone before picking her cat up from a lounge chair.

“[He] held the cat by the neck, whilst making threats to drop the cat if [she] did not produce her mobile telephone,” the documents say.

He punched the woman in the head several more times before finally leaving. He pleaded guilty to charges of assault, choking, minor theft and trespass.

The man also pleaded guilty to aiding and abetting the assault of a different young woman in April 2020. She was attacked by three underage teenagers who wanted to delete certain photos from her phone.

He drove her to the Dickson playing fields, watched her get dragged from the car by her hair then he deleted the photos. She was filmed while teens punched her and stomped on her head.

On Wednesday (6 October), the ACT Magistrates Court heard it was unclear whether or not the 20-year-old believed his relationship with his former partner was over.

His lawyer, Travis Jackson, said his client was in Australia on a humanitarian visa after his family fled a war-torn country.

He said the injuries caused by his client, who worked as a roofer, did not appear to have long-term effects on the woman.

Prosecutor Sam Bargwanna said there was a need for the denunciation of family violence offences given their prevalence.

Magistrate James Lawton said both incidents, in April 2020 and June 2021, were “equally troubling”, but he said the man had a traumatic background as a refugee and was still young with strong prospects for rehabilitation. He urged him to make a fresh start.

He was jailed for 11 months to be suspended after four-and-a-half months. Taking into account time served, he will be released from custody in mid-October. He was also fined $800. 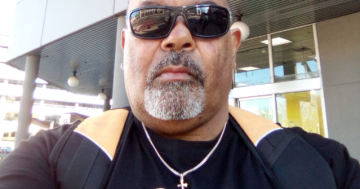