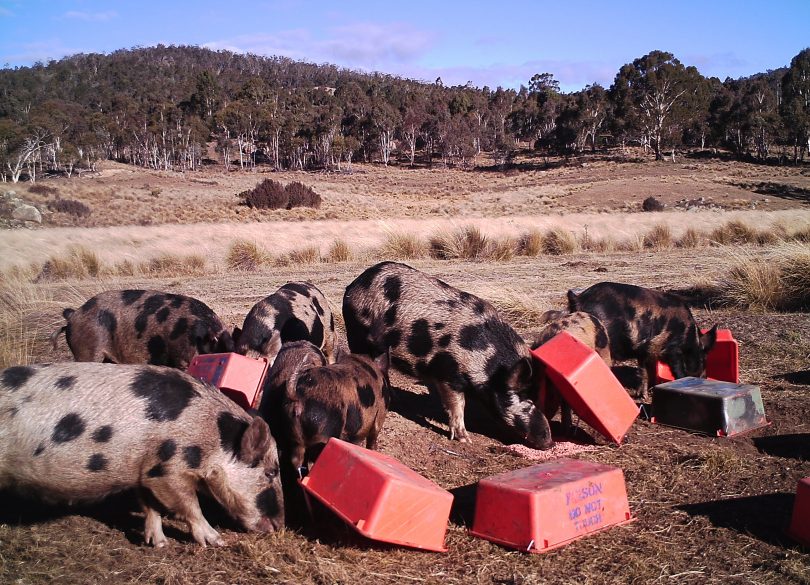 Over 275 feral pigs have been culled in Namadgi National Park, with the ACT Parks and Conservation Service completing its annual control program.

ACT Parks and Conservation director Daniel Iglesias said the program, which has been conducted since 1985, was designed to stop feral pigs from causing substantial environmental damage to the park.

“When feeding, pigs ‘root’ or ‘rip’ up areas of vegetation which can damage wetlands, stream banks and areas of intact native vegetation. They can also spread weeds,” Mr Iglesias said.

“The feeding behaviour and wallowing of pigs can have a significant impact on sensitive, high ecological value areas like the sphagnum bogs and montane streams within the water catchment of Namadgi National Park.”

Feral pigs have a huge impact on the environment and agricultural productivity. In recent months we’ve run extensive control programs in Namadgi and the Murrumbidgee river corridor. We’re also working with neighbouring farmers through the National Landcare Program to reduce pig impacts bit.ly/FeralPigControl

Posted by ACT Parks and Conservation Service on Monday, June 25, 2018

“Since the program began, monitoring had indicated that both the numbers of pigs and damage within the park has been significantly reduced,” Mr Iglesias said.

“Along with our other efforts managing other pest species such as rabbits, the control program has been vital in helping protect the ACT’s water supply.

This year, the ACT Parks and Conservation had expanded the control program beyond Namadgi to work collaboratively with 20 rural landholders in southern ACT to achieve coordinated cross-tenure pig control.

“This collaboration has seen a strong uptake and been a really positive development,” Mr Iglesias said.

“The partnership has been made possible through the National Landcare Program, the Australian Government’s Managing Established Pest Animals and Weeds Initiative and the work of the ACT Regional Landcare Facilitator.”

What sort of a death does that poison inflict on those animals? Wouldn’t shooting be much kinder?

Jody Berg - 15 minutes ago
Jo Martyn , you should paint some! View
Mandii Bennett - 17 minutes ago
Betty Meiksa thanks for bringing joy View
Alice Caroline - 2 hours ago
I saw one in a tree along the Queanbeyan river walk💕 so cute! Such a gorgeous idea. View
News 18

Margaret Edwards - 33 minutes ago
That’s where I fell in love with aqua aerobics many years ago. View
Tracey Crump - 40 minutes ago
Lizzie Parlane I think the pools will remain open (post lockdown) but the fitness programmes, including aquarobics will cease... View
Lizzie Parlane - 4 hours ago
Incredibly disappointed. I have used both pools for 18 years now - through pregnancy, to teach my son to swim, to keep fit. T... View
News 12

JC - 45 minutes ago
Cool story. Except that isn’t what has happened. No where near that much has BEEN spent on lightrail nor has what has been... View
nadine - 2 hours ago
Exactly, when our population was around 250k we had 3 hospitals. Our population as almost doubled but we only have 2 public h... View
whatwik - 2 hours ago
Any informed updates on schools in the ACT and Victoria planning to commence staged returns on 5 October, but NSW not until 2... View
News 23

@The_RiotACT @The_RiotACT
The ACT COVID-19 hotline answers 200,000 calls a week - they could use a break. Why not have one yourself and check out this week's top stories. Subscribed to our newsletter for the week's top news and features delivered straight to you. https://t.co/oHpyv5E6Nk (12 minutes ago)