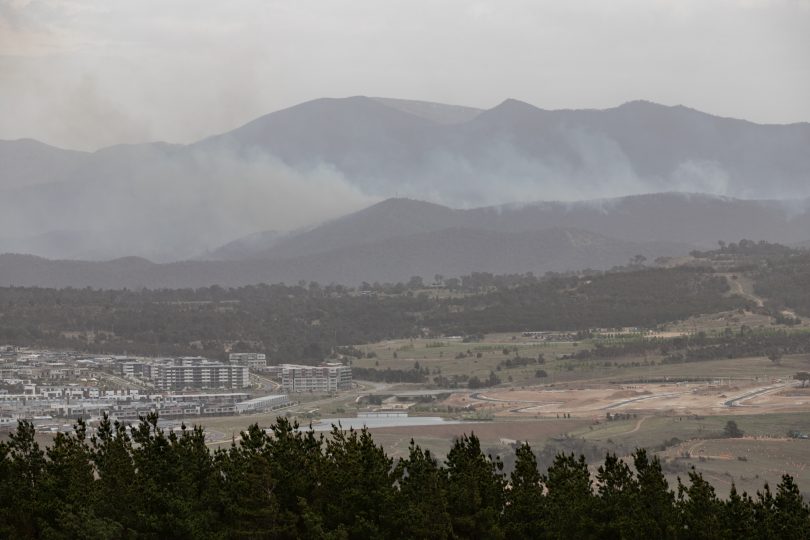 Emergency Services Commissioner Dominic Lane is optimistic about bringing the Pierce’s Creek fire substantially under control following an easing in weather conditions but says that yesterday’s blaze should serve as a stark warning about how risky this fire season looks.

“What we’ve had is the fortune of the storm which dropped a couple of millimetres of rain over the fire-ground late yesterday, creating milder conditions overnight and allowing firefighters to get in and start establishing those containment lines,” the Commissioner told media on Saturday (3 November).

Firefighters have used bulldozers to strengthen containment lines and five helicopters have been bombing the fire edge, drawing water from local farm dams and the nearby Cotter Dam. Commissioner Lane said that local knowledge from landholders in the Paddys River area and Tidbinbilla Rural Service had been particularly useful in fighting the fire.

“I also thought the energy and information that was generated yesterday was very helpful whether it’s through broadcast media, local commentary or social media. It all helps us as emergency services to get the message through that we live in a bushfire prone area and over this summer we’re going to see increased bushfire risks.

But, he said, “There should be concern on days like yesterday. We had very high fire danger and a fire burning to the west of Canberra out of control. Hopefully, yesterday has been a warning call to the community of Canberra.

“Whilst there hasn’t been significant damage caused yet by this fire and we hope to keep it that way, we also hope that its a strong reminder of the risk that our community of Canberra faces. All Canberrans need to be prepared – if you live in a bushfire prone area, you are at greater risk.”

Firefighting operations are focused on strengthening containment lines with heavy machinery and Commissioner Lane said backburning was also playing ” a minor role”, given the additional risks it can bring. The steep and inaccessible terrain continues to hamper efforts to reach some parts of the fire. Paddys River road will not open for approximately 48 hours, and Commissioner Lane strongly urged the general community to stay away from the site.

Commissioner Lane said vegetation that was burnt in 2003 has grown back, adding that we face an extremely dry season. “Some years we are lucky and we see very little bushfire activity in Canberra and surrounding regions, but this isn’t going to be one of those years. These types of years where one car fire can lead to a significant bushfire is what we’re dealing with.”

Bureau of Meteorology duty forecaster Andrew Haigh said that winds on Saturday were still northwesterly but had dropped to around 30km/h in most parts of Canberra. Humidity remains low at 21 per cent, although Mr Haigh said that reports from the fire-ground indicated somewhat calmer conditions there. The BOM is expecting that winds will ease off this evening overnight, but that we’ll get some fresh westerlies again tomorrow.

Sunday’s conditions will be very similar, but Mr Haigh said the Bureau is expecting a front to come through around Wednesday and that there could be some showers and storms ahead of that as well as increased humidity.

There are about 3 cars stolen, dumped and set alight in the Canberra region every night not to mention the break-ins/burglaries to parked cars.

My car was recently broken into and the response from the police was “don’t expect us to call and take details – these offences are in epidemic proportions and we haven’t got the resources t deal with it. Here’s your PROMIS number for your insurance claim, have a nice day”

I find it interesting (and concerning) that there hasn’t been any discussion about the cause of the fire, which early reports suggested was a burnt-out vehicle. In other words, it wasn’t caused by an ‘act of God’ such as lightening strike, but arson. Please correct me if I am wrong. What is being done to catch those responsible?

Well, there is discussion now:

Clare Hyden - 36 minutes ago
Mark Rogers ummm 20,000 through the gate each day. View
James Kelly - 6 hours ago
Health minister impressed… bro I got covid there View
Mark Rogers - 7 hours ago
The event organisers clearly stated it was not limited to 20,000 a day. It was 80,000 overall. So some percentage of that was... View
Opinion 375

ACT out of the fire danger and into the storm

UPDATED: Conditions ease at nightfall as Orroral blaze is within two kilometres of Tharwa