Poetry and Public Art in Canberra 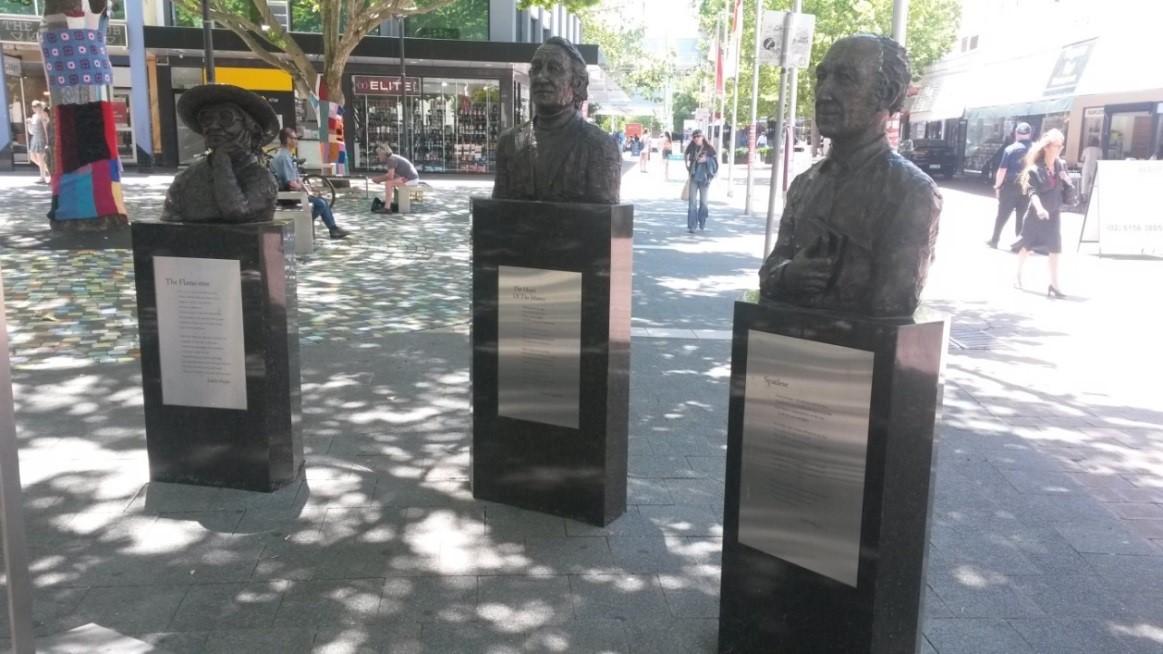 Richard Scutter reflects upon verse and vision in the ACT.

Four years ago on 30 January, Poets’ Corner at Garema Place was officially opened by the then ACT Chief Minister Jon Stanhope as part of an ACT Government public art initiative. The three poets selected for recognition in the Corner were A. D. Hope, Judith Wright and David Campbell. Figurative sculptures created by Cathy Weiszmann with signage by Richard Tipping were unveiled. A poem from each of these poets is included at the base of the statue.

A.D. Hope’s poem is ‘Spatlese’, which he wrote when he was nearing 70. In this poem he advocates,

Old men should be adventurous.
On the whole I think that’s what old age is really for…

It’s a message that all of us should heed because when it comes to public art, Canberra is ageing in a most unadventurous manner. What are the ACT Government’s major public art, poetry and creative industry initiatives? For example, should the new suburb of Wright acknowledge Judith Wright in ways other than just by name?

Perhaps the Garema Place Poets’ Corner could be used as a venue for public poetry including school readings? This Corner could become a public speaking platform allowing Canberrans to render their distinctive voice and identity in contrast to that which emanates from the Hill. There may of course be other appropriate places where poetry readings could occur. Judith Wright used to read at Westbourne Woods, Yarralumla.

What’s your favourite piece of Canberra public art and poetry? In this regard, what would you like to see and hear more of and where?

Richard Scutter is a local poet who blogs, writes and analyses at ‘My Word in Your Ear’. His collection of poems goes by the same name. This article was posted by Kim Huynh who is involved in an exciting new poetry initiative with Richard.

Pictured at top, the statues in Garema as they stand today.

I have some sympathy with the creation of art work which have multi-functionality. One of the issues at the time of the ‘Garema Place statues’ was who to include and I know there was a strong ask from the poetry community to include Rosemary Dobson. In this age of electronic communication what about an electronic poetry board created as an art work. This board could display local poetry on an on-going basis – poem of the week or poem of the month. This would open recognition to many local poets. It would provide words for the mind for those sitting around Garema Place. It would be something quite different from displaying time and temperature though the board could have a multi-function dimension.

I would rather the money spent on public art be spent on interesting playgrounds.

We like the Goldfish (bogan moths) on the parkway in Kambah and the Owl in Belconnen. The music things on Lake Ginninderra are also fun. They usually spark at least a comment when we go past.

The interest in public art seems to have receded entirely … perhaps there is more interest in seting up commercial hoardings to define Canberra in line with other cities … I always thought Canberra a little uniquue a little different and a bit of a trend setter … oh well the changing face of Canberra.

I don’t think Canberra could be called the “trend-setter” for introducing public art.

If I recall correctly, public art was imposed on us after a previous Chief Minister visited Europe and became besotted by it in places like Seville (which also has trams).

There is a great article about Canberra’s public art here: http://www.weekendnotes.com/canberra-public-art/

The interest in public art seems to have receded entirely … perhaps there is more interest in seting up commercial hoardings to define Canberra in line with other cities … I always thought Canberra a little uniquue a little different and a bit of a trend setter … oh well the changing face of Canberra.

Ab Fabco - 33 minutes ago
Robyn Holder You will be waiting a while for sensible responses. This entitled bunch of parent don't seem to understand peopl... View
Elle Apopei - 4 hours ago
This is a great idea! And I have seen examples of fenced playgrounds that still incorporate nature and beauty without feeling... View
Elle Apopei - 4 hours ago
Rebecca Willis View
News 5

Futureproof - 2 hours ago
It's not just Hyundai EVs, it's Hyundai in general. There have been worldwide recalls for vehicle fires on Hyundai ICE vehicl... View
nobody - 5 hours ago
Hyundai have recalled about 1,000 electric vehicles in Australia to replace the batteries, and about 82,000 worldwide. LG hav... View
News 18

The days are longer. The sun is higher. The air is warmer. No sooner did the ACT Government announce that...
News 44

WARNING: This story may distress some readers. 'Pindar' the peacock is the latest to be struck by a car on...
Lifestyle 16

@the_riotact @The_RiotACT
The @WNBL #draw has been released and, as Tim Gavel writes, there's a lot for @UCCapitals #fans to get excited about https://t.co/EV8vf94L2J (25 minutes ago)