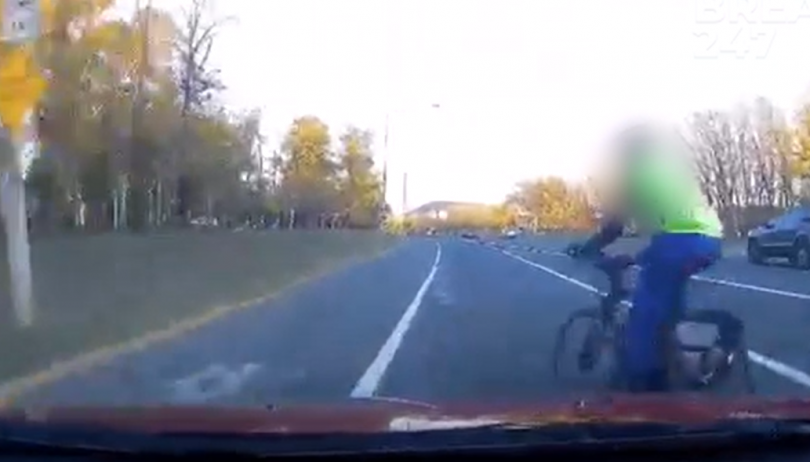 Police are investigating after a cyclist was hit by a car on Thursday afternoon (16 May).

At 4:40 pm, emergency services were called after reports of a collision involving a bicycle and a car on Yarra Glen, near Curtin.

Dashcam footage obtained by Region Media shows the cyclist crossing in front of the oncoming car. The shocking footage captured the moment the man was hit by the vehicle before rolling several times.

The cyclist was taken to hospital in an ambulance.

An ACT Policing spokesperson said the investigation into the incident is ongoing and as such it would be inappropriate to make any comment at this time.

A cyclist is lucky to be alive after being hit by a car on Yarra Glen on Thursday afternoon (16 May).

Dashcam footage obtained by Region Media shows the moment he was hit by an oncoming car.

Thanks to Canberra Notice Board for helping to obtain the footage.

Blame needs to be attributed to the ACT Government for all on-road cyclist accidents in Canberra. It is encouraging inexperienced cyclists onto the road with its on-road bike paths. Inexperienced cyclists are under the illusion that they are safe on these paths – but they aren’t. I regularly see cyclists wobbling up the on-road paths… they are an accident waiting to happen.

When you mix entities that travel at dramatically different speeds then accidents will happen. Whether it be cars and bikes, or bikes and pedestrians. The ACT Government is pushing these shared roads and paths which initially were not designed to be shared and haven’t been modified so that they can be safely shared. The onus of safety has been pushed back to drivers, cyclists and pedestrians rather than responsible traffic management and design.

While this is a tragic accident and I hope the cyclist isn’t too injured, he unfortunately didn’t look at the oncoming traffic before he crossed. More experience would have told him that he needed to stop and have a really good look at approaching traffic because cars are approaching from below. This cyclist appeared to have little idea that a car was approaching at all.

Ouch. Just a suggestion which no doubt will be ignored by many – the footage is just one aspect the police will examine during their investigation, so bear that in mind before attributing guilt.

Sue Skinner - 23 minutes ago
I never knew that this existed! Susan English have you seen it? View
Katie Erskine - 9 hours ago
So glad we had breakfast there with you Jennifer Lindley . A great piece of Canberra.... View
Ramon Montero - 11 hours ago
Incredible I worked par time there also my wife in the kitchen the early '70s was so busy every night, very popular. View
News 8

Michael Cameron - 2 hours ago
Shawn Mulgrue 1st..YES! View
Mandy Savery - 9 hours ago
How about delivering on campus for the students that are here? Or even delivering lectures live online instead of videos from... View
Opinion 11

Jack Horne - 8 hours ago
Charlie Karmenu Flask must have been with Hellstra in the aluminium lined carriages and metallic glazing that stops 5g emissi... View
Charlie Karmenu Flask - 11 hours ago
NASA can operate a helicopter on Mars and I couldn't ring my wife, from the XPT, around Albury/Wodonga...it's 2021 NSW/Vic ra... View
HiddenDragon - 12 hours ago
There's quite a lot to be said for this, so it probably won't happen - but if it does, it will make Canberra that much more o... View
Lifestyle 7

Kristy Lee Morrison - 9 hours ago
Ken McInnes Used to go for coffee there in the mornings on a walk and they’re always so friendly 🥰 Great family business... View
Breaking 1

ChrisinTurner - 12 hours ago
Why has the supply of vaccine to GPs been delayed? If GPs are capable of giving us our annual flu jab, why were they not used... View
Business 40

Daniel Kelly - 13 hours ago
Great news for our town, hopefully we won't be waiting 16 years for nothing again. https://www.youtube.com/watch?v=Umx5S1vCLU... View
News 48

Jeff Smith - 14 hours ago
I'm completely gobsmacked the Burns club can do this. Each year we seem to lose another little piece of public amenity in Kam... View
Yvette Croft - 18 hours ago
Tom Walsh They just want their equipment at a standard required by Australian and World Athletics, is that too much to ask fo... View
Tom Walsh - 18 hours ago
Yvette Croft they Cried about it, be realistic. View
Lifestyle 10

Andrea Trappes - 17 hours ago
Gosh my kids had nothing else but cloth nappies. They survived. View
Community 1

ChrisinTurner - 18 hours ago
A study a few years ago determined that the best effect on traffic congestion would be to delay the school day by 30 minutes.... View
show more show less
*Results are based on activity within last 7 days

The head of an electronics store has been sentenced for stealing almost $60,000 from his employer. The agreed facts in...
Breaking 1

UPDATE 2:10 pm: ACT Policing has reported that the exclusion zone across parts of London Circuit, University Avenue and Knowles...
Property 15

Anyone who visits Canberra businessman Terry Snow's 2000-acre equestrian park at Bawley Point on the NSW South Coast is, quite...
Property 15

@The_RiotACT @The_RiotACT
Would more flexible working hours sort out our traffic congestion? And can your boss tell you what to wear to work? Here are our slightly surprising poll results https://t.co/bzFvQqFbLG (10 hours ago)

@The_RiotACT @The_RiotACT
Want to own a historic piece of Queanbeyan? Barber's Cottage, built in 1885, might be just what you're looking for. The three-bedroom property goes to auction on 5 June https://t.co/ceRZRRIvlH (12 hours ago)