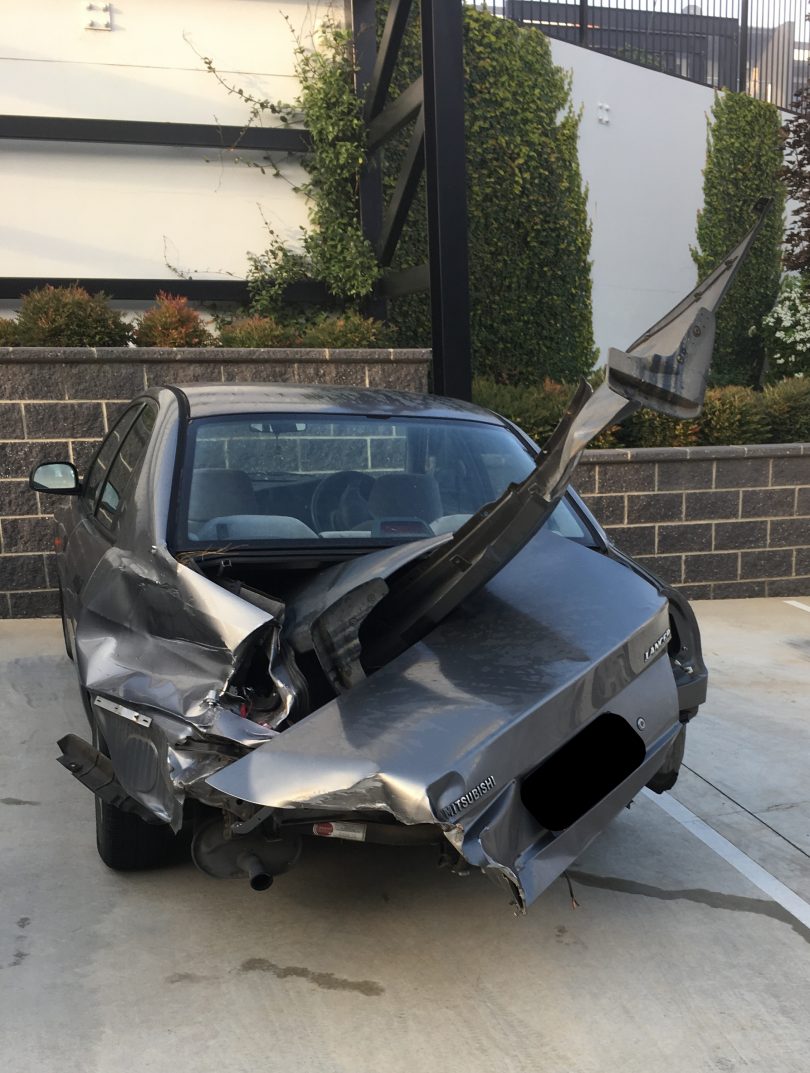 A car suffered serious damage after the crash. Photo: Supplied by ACT Policing.

Police are on the hunt for the driver of a four-wheel drive that was involved in a Belconnen collision early yesterday morning (30 April) and are urging the driver to come forward.

ACT Policing is calling for witnesses to a collision about 7:20 am at the intersection of Baldwin Drive and Stockman Avenue Lawson between a silver Mitsubishi Lancer sedan and a light coloured four-wheel drive.

The driver of the four-wheel drive failed to stop after the crash, which left the sedan with a crumpled rear.

Anyone who may have witnessed the incident or who has dash-cam footage that could assist police is asked to contact ACT Policing Operations on 131444.

Martin Ross - 37 minutes ago
Steve Jones transport Canberra buses don’t have flashing lights. Only Qcity ones do. And the local private companies don’... View
Peter Ball - 4 hours ago
Gai Wil - So given that logic, a 5 kmh limit would be OK with you yeah? I mean, as you stated if you don’t speed (regardles... View
Peter Ball - 4 hours ago
At least I feel safer now, when crossing the road while updating my FB profile. 😜 Before the new limits, it was like Russi... View
Lifestyle 23

Simone Moss - 43 minutes ago
Sarah Moss,maybe you need some alpacas 🦙 View
Lucy Coote - 2 hours ago
Tom Gilbert uhhhhh I mean at least we wouldn’t have to mow the grass… View
Amanda Robyn - 2 hours ago
Suzanne Feeney. See. Alpacas is what you need. 😉 View
Sport 5

Capital Retro - 3 hours ago
And all this "inspired" by this very disingenuous ad: https://www.youtube.com/watch?v=M_GBQhI1LsA Hello Bjorn? That's what gl... View
Brisal - 4 hours ago
99.8% of these cars will never be driven further than Yass. This car's range is perfectly fine for that. View
enjayjay - 4 hours ago
Look up the real world highway speed range of this and you’ll be properly disappointed. The polestar 2 which is same drivet... View
News 47

UPDATED 4 pm: As Friday draws nearer, the rules governing how our COVID-normal will look continue to be released. As expected,...
Property 29

Everyone loves a good pub feed, a refreshing beer, or simply catching up with mates in a laid-back environment. Being...
Property 29

@The_RiotACT @The_RiotACT
Sally Hopman reckons there's no need to #write yourself off if you are struggling with #computers. Just pick up the heaviest thing handy - ancient Remington #typewriters are always good - and take aim at the laptop https://t.co/5SoyRLLAhU (59 minutes ago)