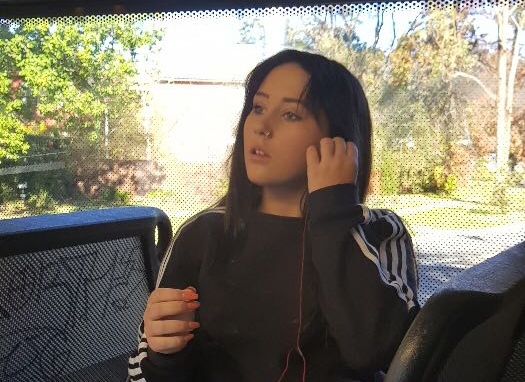 ACT Policing is again seeking assistance from the public to locate 11-year-old girl Susannah Brown (pictured), who has been reported missing.

Susannah chose not to return to her home on Friday evening, and spent Friday night (31 May) at a Woden hotel with a friend. She was last seen getting off a route 6 bus on Yamba Drive, around 5:15 pm on Saturday (1 June).

She is described as Caucasian in appearance, about 165cm (5’5”) tall, with a medium build. She now has dark brown or black hair. On Saturday afternoon she was wearing a black tracksuit top with white stripes down the sleeves, black pants with ripped knees and black shoes.

Susannah has been reported missing several times in the past, and police believe people are helping her including lending her bus passes and telephones, or providing somewhere to stay.

ACT Policing Officer-in-Charge, Tuggeranong, Station Sergeant Greg O’Ryan said that while it appeared Susannah did not wish to be found, her safety was the primary concern of police.

“We have several police officers, and other police resources involved in the latest search for this eleven-year-old girl,” Station Sergeant O’Ryan said.

“Some people may think it’s harmless to give a runaway a place to stay for a night. But simply put, she is eleven years old and when the whereabouts of a child is not known, there is always that increased risk of harm or misadventure.

“I would ask anyone she asks for a place to stay to let police know her whereabouts immediately.”

Anyone who has seen Susannah or has any information about her whereabouts is urged to contact ACT Policing on 131 444.

Russell Hadley - 1 minute ago
Sher Young I drive past there daily and never see anyone around. Maybe they are all in lockdown. View
Julie Macklin - 19 minutes ago
Andrea Kerr One of the brands I avoid if possible when I am travelling. Too expensive and not everyone wants to pay for bounc... View
Matt White - 20 minutes ago
Exactly and when driving past in summer I always think how hot it must be. View
News 93

Jeff Smith - 31 minutes ago
Considering that the great walking city of Copenhagen's populated centre density would mean that we could fit double Canberra... View
Tammy Britt Welsh - 3 hours ago
Peter Mcleod and the alternative policies are?????? View
Joshua McTackett - 5 hours ago
Peter Mcleod the only part of that I agree with is that we need an ICAC. Every state and territory should, as well as the fed... View
Lifestyle 14

Anne Littley - 48 minutes ago
Also Braidwood book fair is on View
Gary Fynmore - 22 hours ago
If outdoor pursuits is your thing I can highly recommend Braidwood Outdoors. Dare I say it but it's a fantastic 'man cave ' B... View
Opinion 27

Andrew Ransom - 2 hours ago
Ian Gay R’Amen View
Frank Trapani - 4 hours ago
Morris Reinbear . Haha..didn't even think about it. Does it means that we are not all Australians ? But mixed up Heinz 57 of... View
Christie Horsfield - 4 hours ago
Kerstin Mahoney agreed ridiculous View
News 49

Jill Worrell - 5 hours ago
Sold our investment property for all those reasons...paid the final tax (capital gains) and will never go there again...1 les... View
News 47

Half the platypus population at Tidbinbilla Nature Reserve have had to be rescued from their disappearing ponds as the drought takes...
Opinion 27

Have you seen Dylan? Police ask for public’s help to locate missing 14-year-old

@The_RiotACT @The_RiotACT
The sports rorts affair signals a crisis in the principle of responsible government & the accountability at its core. Bridget McKenzie seems to have contracted the Trump 'deny everything' bug, says Ian Bushnell https://t.co/D7WPOVD55D (4 hours ago)