ACT Policing is seeking witnesses to a burglary and property damage at the St Clare of Assisi Primary School in Conder on Friday night March 20.

Police believe that sometime between 9pm and midnight on Friday, access was gained to a toilet block at the school where offenders have caused around $10,000 in property damage.

ACT Policing is investigating a burglary at a construction site near Uriarra Crossing on the weekend (March 21 and 22).

The site was secured on Saturday afternoon around 3pm. Workers from the site found thousands of dollars worth of equipment missing this morning (March 23) when they returned to work.

Construction equipment and tools including six generators, drills and saws are among the items stolen. 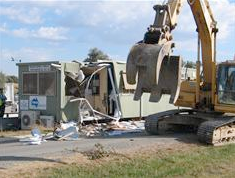 ACT Policing is seeking witnesses to a burglary at the Mitchell Transfer Station on Flemington Road in which a 20-tonne excavator was used to tear down the wall of an Atco weighbridge building and steal a safe.

Offenders gained entry to the premises, the property of the ACT Government, sometime between 11pm Sunday evening (March 22) and 12.30am today (Monday, March 23) by cutting a hole in the perimeter fence. The offenders then broke into and started up a 20-tonne excavator which was parked on site.

The excavator was driven to the weighbridge building where the machine’s claw was used to rip open the side of the building and extricate a safe, which was then loaded onto a truck. The safe contained a significant sum of cash.

The safe is branded as an API Series II. It is described as dark green in colour, about one metre in height, with two keyholes and a tumbler on the door. It has a registration number of BO492.

Police believe that the Mitchell burglary may be connected to one overnight at a construction site in the new Gungahlin suburb of Harrison, where a chained gate was cut open and three-tonne tipper truck was stolen. The stolen truck was found burnt out today in Hall.

The Officer in Charge (OIC) of Gungahlin Police Station, Sergeant Chris Meagher, said that suspicious noise or activity during the night at the Transfer Station may have been detected by passers-by, and has urged anyone who may any information which would assist the investigation to contact Crime Stoppers.

“We believe that the offenders may have been on the site for more than one hour,” Sgt Meagher said. “We would very much like to hear from anyone who saw or heard anything suspicious last night (Sunday) or in the early hours of this morning to contact us.”

I’m sorry, did you just say that it might be safer for a manager to take the takings home with him, rather than leave them in the safe?

The Mitchell safe robbery sounds very much like an inside job.

There were some ex-Aussie Junk workers that had to be removed by police a few months back because they were protesting about pay still owing (there was a thread on here about it, JB may be able to dig it up), wonder if there is a connection. Though maybe not as the Transfer Station was targeted rather than Aussie Junk – two seperate entities I believe. Seems rather silly of the Transfer Station to leave a safe full of money lying around in a quiet industrial suburb over the weekend. I would of thought a supervisor/manger type person would take the takings home at the end of the day (perhaps leaving a hundred dollar float).

Having worked inside that former building, i concur that it would have been “somewhat” of an inside job. If it were the guards, they would have not left a mark nor used a backhoe. Maybe Aussie junk is getting greedier?

Guess they weren’t worried about their greenhouse footprint.

The CT reported that the thieves left the excavator motor running. What was the point of that? Were they hoping that the police might blame the robbery on rogue equipment? Or staff negligence?

Has anyone got a higher-resolution photo of the digger robbery? It’d make a great submission to the Fail Blog.

Does to me. Sounds like the kind of job you pull when you know that the safe doesn’t get empties after a weekends trading. Although I guess they could have just watched the place to find that out.

The Mitchell safe robbery sounds very much like an inside job.

Sue Mckellar - 4 seconds ago
Yes, my son has been studying at home. View
JJ Lindsay - 2 minutes ago
Melissa Flanigan I would say kids in the bush have far better well thought learning plans and set ups than families and teach... View
Thilani Mulrine - 4 minutes ago
I was actually saying the other day that one of the most impressive nine year olds I’ve ever met was learning from school o... View
News 34

John Dale - 41 minutes ago
Yep, great idea. I don’t see even one appeal coming out of this. Not one. No, seriously. View
Opinion 15

John Hynes - 42 minutes ago
MB Miyagi or throw matches for bookies like India has done View
MB Miyagi - 44 minutes ago
John Hynes or spending more than they are allowed to like Carlton did 😃 View
Steve Frame - 2 hours ago
Lisa Bishop if they don't pass the money they make from selling the tv rights and selling out stadiums to the players, the we... View
Food & Wine 2

Jen Harkness - 3 hours ago
I missed the cut off so dissappointed View
Phil Beattie - 10 hours ago
Ordered mine. Can't wait. View
Best of Canberra 2

Chris Jones - 4 hours ago
Parenting is one thing. Teaching at the same time and also trying to do your own job so you can get paid and actually provide... View
Trish Arthur O'Sullivan - 11 hours ago
Years ago this is exactly what happened and we didn’t even get child endowment because the government couldn’t afford it.... View
Food & Wine 4

Julie Macklin - 6 hours ago
They always take what I give them. It's clean and if clothes, washed and ironed, ready to hang on the rack, and still wearabl... View
Ashley Wright - 8 hours ago
David Klenka maybe because what you are bringing them is in realty crap and of no use to them. And by just leaving it for oth... View
Nicole Lee - 9 hours ago
I agree it's disgusting that people do this but removing the bins isn't going to stop this problem. So what is the government... View
Property 77

With COVID-19 regulations enforced and daycares and schools reducing their capacity or closing, parents are finding themselves with a triple-whammy...
News 43

It will be a brave new world for ACT public school students next term, with classes delivered online whether students...
News 38