Around 7:45pm police were contacted by a 16-year-old male youth who stated he had been assaulted and searched by a group of males as he walked home from Lanyon Marketplace, Conder. The youth told police the males were in a Toyota Kluger 4WD.

Then around 8pm police were contacted by a 28-year-old man who stated he had been walking along Hallstrom Circuit, Monash, when he heard a vehicle approach. A man stepped out from the vehicle and hit him in the back of the head causing him to fall to the ground and lose his glasses. The victim sustained a number of further strikes to his head and arms and eventually released his grip on a bag he was carrying. The offender took the bag and got back in the vehicle which drove off along Hallstrom Circuit. The victim described the vehicle as being the size of a 4WD.

Around 45 minutes later police were contacted by an 18-year-old man who stated he had been delivering pizzas in Fred Lane Crescent, Gordon, when four males exited a 4WD and made demands. The victim handed over cash and three pizzas.

Police have spoken to three males in relation to these incidents and investigations are continuing. 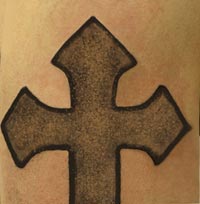 ACT Policing’s Territory Investigation Group have released a partial image of a tattoo from a sexual assault offender who attacked a Narrabundah woman on Thursday morning (April 30).

The woman had returned to her Bungonia Street home about 10.30am to find the man inside her house.

The victim was able to provide police with a description of a tattoo which was on the inside of the offenders left fore arm. Pictured is an image of the part of the tattoo the victim could see during the attack.

The offender is further described as being of stocky build with dark skin, and wearing a light-coloured top with dark horizontal stripes, three-quarter length denim pants and white shoes.

The man left the premises about 11.25am carrying a large, light coloured bag similar to a garbage bag.

Someone must know him. Or at least know of him.

What a shame it’s cold weather and he’ll probably be able to hide the tatt with long sleeves. Anyway, I’m sure he confessed, said a few prayers and will still get a spot in heaven.

A rapist with a crucifix tattoo. How quaint.

Martin Bradley - 6 minutes ago
The way I see it, you shouldn't have to pretend that different races and cultures don't exist, you're allowed to recognise th... View
Salima Haidary - 10 minutes ago
Sorry. but who is Zoya Patel ?? View
Martin Bradley - 13 minutes ago
In what ways do you treat someone differently that you meet based on their race? View
What's On 8

Susan Peachey - 54 minutes ago
Yes. But make it voluntary until 25. View
Jo Hann - 3 hours ago
Nada Krstin if you pay tax, you should have an option to vote for the government that spends it. It's not about being "adult... View
Nada Krstin - 10 hours ago
Julie Macklin copy that, all taken onboard - welcome all feedback - only way I will learn :)... View
Opinion 17