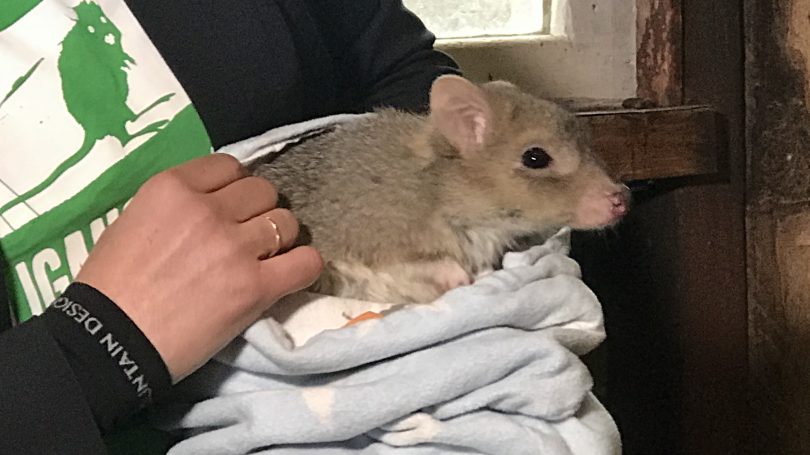 The Eastern Bettong has made it onto the ACT’s Threatened Native Species List. Photo: Supplied.

The Eastern Bettong may have lost out in the contest to become the ACT’s mammal emblem but its future is looking secure following its listing on the ACT’s Threatened Native Species List.

The small kangaroo-like marsupial (Bettongia gaimardi) received the listing following a formal recommendation from the ACT Scientific Committee which identified that it needed the future protection the listing would bring.

“The ACT Government brought 60 Eastern Bettongs from Tasmania, the only place they are now found in the wild, to Tidbinbilla Nature Reserve and Mulligan’s Flat Woodland Sanctuary in 2011 and 2012, where the small kangaroo-like marsupials have thrived and become extraordinarily popular with residents and visitors alike,” Mr Gentleman said.

“We estimate there are at least 160 animals in Mulligan’s Flat Woodland Sanctuary and 70 in Tidbinbilla.”

The Eastern Bettong has been successfully reintroduced into the ACT. File photo.

Mr Gentleman said that the Eastern Bettongs are playing an important role in restoring the ACT’s grassy box-gum woodland, which is a threatened ecological community.

“As they dig for truffles to eat they are working as ‘ecosystem-engineers’, improving soil conditions, water infiltration and habitats for other organisms,” he said.

Mr Gentleman said that he has listed the Eastern Bettong in the Threatened Native Species List as Regionally Conservation Dependent.

“Listing an animal is formal recognition of the need for ongoing management to conserve the species in the ACT,” Mr Gentleman said.

Anthony Briscoe - 19 minutes ago
Michael Wilson he is a brick wall View
Cleve Gabriel - 5 hours ago
Can’t see it happening ,he’s there for as long as he wants unfortunately. The shame of it all is that represents himself... View
Penelope Farnsworth - 6 hours ago
It tends to be hard to shift the one Labor one Liberal Senate pattern for the ACT View
Lifestyle 4