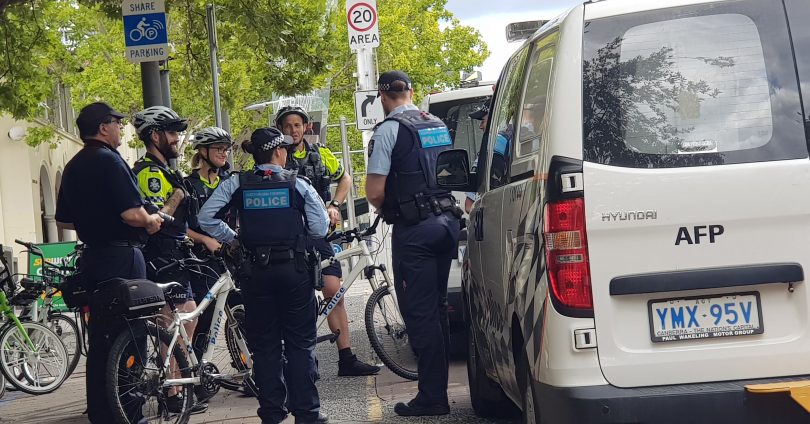 The COVID-19 crisis has been the biggest news story in the world for months now, but RiotACT readers are divided on how much more news they can bear.

Amid several research projects into major news consumption and what you believe, we asked whether you are consuming more or less news during the COVID-19 crisis?

The answers were closely aligned on the 438 responses we received. You could choose to vote that you were consuming Less news: it’s all too sad, hard and depressing. This received 46 per cent of the total (or 199 votes).

Alternatively, you could vote for More news: I need to be as well informed as possible in unprecedented times. This received 54 per cent of the total (or 239 Votes).

This week we’re asking how you feel about the new laws making it an offence to assault a frontline service provider, including nurses and police, ambulance workers, firefighters, corrections officers and emergency services volunteers.

The ACT now has a specific offence for the assault of frontline workers, carrying a maximum two-year prison sentence. However that’s the same maximum sentence for common assault, the difference being that a criminal record will now record the specific charge.

New offences for driving at police and damaging a police vehicle have also passed the Legislative Assembly and carry a maximum prison sentence of 15 years and five years respectively.

Despite welcoming the changes and endorsing the move to have offences recorded on a criminal record, the Australian Federal Police Association (AFPA) has said the ACT Government should not be patting themselves on the back any time soon.

“Two years is the same as the rest of society … I understand the argument for that but we put ourselves out there every day exposed to the criminal element and people want to hurt us, so two years is nowhere near enough. It has to be raised up to five years.

“You can damage a police car, an inanimate object, and get five years, but if you assault a human being it is only two years. It seems a little bit imbalanced,” AFP Association president Angela Smith said this week.

Police Minister Mick Gentleman says the decision was undertaken in consultation with the Human Rights Commission, fulfilling obligations under the Human Rights Act 2004 to ensure that laws and policies in the ACT do not have a discriminatory, disproportionate or unintended impact on particular groups.

“A two-year imprisonment penalty balances protecting and supporting police and other frontline workers with ensuring we do not infringe on human rights,” he said.

Chewy agreed, saying “Whilst I have full respect for all police officers, they should not receive specific protection not available to other citizens. It looks bad and is far too open to abuse by those officers even though the vast majority of them are good people.

“We are all the same, no citizens should be given extra rights like this. The real problem is that assault punishments in general are far too lax for everyone.”

Nathan Lofthouse disagreed: “It’s a start, now amp it up to parity with the charge for damaging a police vehicle (up to 2 years for assault on a person, up to 5 for damaging the vehicle)”, he said.

Will resisting arrest constitute assault against a police officer? What if you resist arrest while at a peaceful demonstration or while sitting on a park bench eating a kebab and told to move on by an over zealous officer as happened in Sydney?
Will refusing or resisting medical treatment constitute assault against a health worker who is trying to force their unwanted attentions upon you?
I foresee many difficulties with this poorly thought out thought bubble legislation.

Finally Relented - 5 minutes ago
Ashley Wright yeah. Know that. Lived here all my life pretty much. They don't work any more. Much better 10-20 years ago. Pla... View
Ol L - 17 hours ago
Maybe if we do nothing another government will be in power when it all blows up, so let’s do nothing in the meantime View
Ashley Wright - 18 hours ago
Sally Greenaway found the article. https://www.cityservices.act.gov.au/roads-and-paths/traffic/trafficsignals/drakeford_drive... View
News 51

Jaana Surakka - 9 hours ago
Lea Powell while throwing around your ‘broad statements’ argument. Please refer back to your comments. I see a ‘horrid... View
Opinion 16

Ian - 10 hours ago
This opens an interesting idea for industrial action. Everyone turn up at the same time on the same time, and overfill the av... View
Adam Jovanovic - 11 hours ago
Depends on the person. If works pretty much your only social life then yes it will be hard and your going to have to make an... View
Helen Prior - 12 hours ago
Not only has the human factor gone from work place, it is disappearing from from all over Canberra. View
News 23

Adam Jovanovic - 10 hours ago
Radios dying breed just like when video stores where on the decline. All you have to do these days is hook your phone to the... View
News 10

Rob Zed - 13 hours ago
I may be wrong, but did Cobb n co stage coaches pull in way before Canberra was there ? And don’t forget Steve grieve and t... View
Property 4

Probing the polls: how to help renters and when should we lift the COVID-19 restrictions?

@The_RiotACT @The_RiotACT
The Sydney and Melbourne Buildings are more than historical landmarks, their tenants show how Canberra has evolved over almost a century - and you might be surprised to learn which businesses have survived longest https://t.co/9AdsDBtuTd (1 hour ago)

@The_RiotACT @The_RiotACT
Canberra’s most pup-posterous & dog-centric event of the year is returning on 24 April, with BarkFest 2.0 promising a paw-fect doggie day out https://t.co/4lkhjEFvJW (11 hours ago)