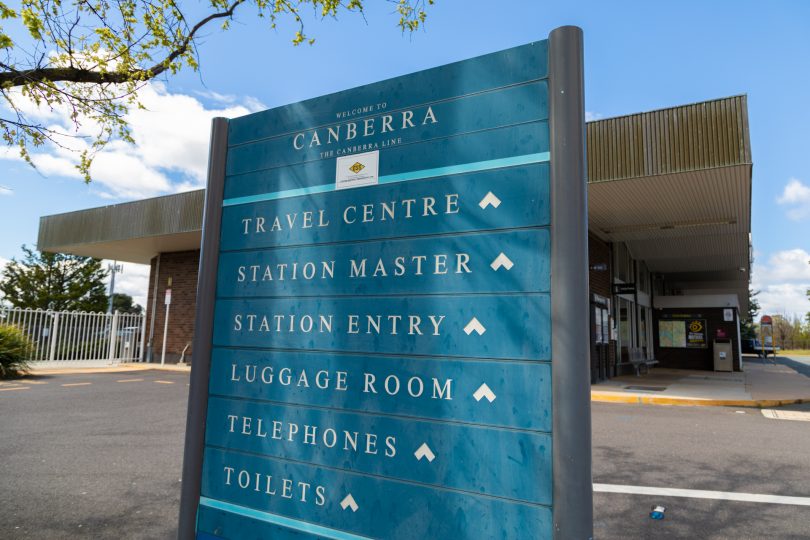 As Canberra’s COVID-19 outbreak continues, most Riotact readers think the Government has done the right thing in extending our lockdown until October 15.

In last week’s poll, we asked: Did the Government make the right call extending the lockdown? 1755 readers voted.

This week, we’re wondering whether we need a new railway station.

The Public Transport Association of Canberra and Inner South Canberra Community Service both say we need a conversation about upgrading or relocating the existing Kingston station to create a district transport hub, including park and ride.

READ ALSO Is Canberra Railway Station a relic in need of a makeover, or a new site altogether?

Public Transport Association chair Ryan Hemsley said the railway station was not sustainable in the longer term, particularly if the current low number of Sydney services remained. He urged the ACT Government to continue its work with NSW for a faster train journey between the two capitals.

“The nicest station on that site won’t increase patronage so long as there are only three services utilising the station each day,” Mr Hemsley said.

He’s envisaging a new station site including a fast mass transit connection linking the station to other parts of Canberra including the Parliamentary area and the City.

Many readers agreed. Peter Curtis wrote: “I think the train is an excellent service. Most of the travel delay occurs in Metro Sydney because there is no dedicated line at Central, so suburban lines take priority”; although Harold Fryar wrote: “Put the money to help build a high speed train Sydney – CANBERRA – Melbourne. Many other countries have them, a great way to travel not everyone wants to travel by plane”.

Preliminary planning for East Lake did include investigations into the future of the Canberra Railway Station and government sources say that alternative locations for the station were discussed, however, the current location is supported by the community.

A new railway station would mean multiple infrastructure issues to resolve not least the fact that the main southern rail line goes through Yass. But if we’re serious about a light rail network, should we link it to intercity transport options and relocate it to where it could be more accessible?

I love catching the train to Sydney, but can’t safely park my car at the station for the weekend so it’s an added pain to organise an Uber to Kingston at sparrow’s fart.

and ‘down the track’ perhaps commuter services via light rail to Bungendore , Michelago and beyond, with stops at Jerrabomberra, Googong, Hume, and connections into the Tuggeranong valley

As a regional passenger, i already have to take a 4 hour bus trip to canberra to catch the train to Sydney. The timetable is very limited, and an upgrade would be most welcome

What advantage would be gained by extending the railway line into Civic? You can hop off a tram in Civic now and be in the centre of Sydney in as little as three and three quarter hours by hourly public transport coach. If the railway line were extended into Civic, the same trip would take an extra 45 minutes, and you would have to wait up to five hours for a train to depart.

There should be a fast regular Civic to Goulburn link at least. The Sydney train service from Kingston has not been viable for years if not decades. It should be regional from Canberra to Mittagong if anything.
Even then, the Civic to Goulburn coach is faster than the train, but there’s only one service daily linking up with the existing Sydney Trains network. If Transport NSW linked this up for convenience, Kingston station would be basically redundant.

Location is less important than connections. Make it easy to get from train, plane, bus, taxi/car sharing and light rail.

It’s an idea that has been reborn for every local election. But the problem is the current track, (most of which is in NSW), is in disrepair and NSW have refused to rebuild it to a VFT standard. What’s the point of a 3-4 hour train trip when a car trip is usually 3 hours door to door. All of Australia’s rail infrastructure needs to be updated and the old lines put to use as a freight lines. Reduce the heavy traffic on the highway and in the city.

All I want when book a train, is a train, not a bus!

If it could get me to Sydney quicker than the bus…

Griffin had a coherent public transport system based on rail including a track from QBN, through Civic and on to Yass. What a lost opportunity!

I love trains, and the idea of a high-speed train is very enticing, but I’d probably only use it once or twice for the novelty value. My family live on the northern beaches of Sydney so it would be faster for me to drive, rather than a train, then bus. To Melbourne and Adelaide – once each probably.

I have telecommuted on the trains since graduating in 1992 on and off. I used to get strange looks when I worked away on my VGA IBM laptop back in those days!!! Griffin always intended that we have a railway and most of the corridor still exists, even to Tuggeranong. Beyond that we need to link to Tumut/Wagga, Yass, Goulburn and Cooma. Imagine the down being measured from Canberra instead of Sydney.

We need a new railway station, but it would not be cost effective to put it in the city centre. It could be instead located at an exiting, or new, transport hub which would not require extensive tunneling.

I took a trip from Sydney to Canberra on a “high speed” tilt train in 1995. NSW Rail borrowed some Swedish tilt carriages for the usual XPT. It was very comfortable, but the speed was limited by the track. http://www.tomw.net.au/atmttrn1.html

Some track upgrades would make Sydney to Canberra viable by train, without the need for an expensive “very high speed” train. The XPT was derived from the UK’s InterCity 125. Those have been replaced by British Rail Class 802 AT300. These could operate on overhead wires in Sydney, then switch to diesel power at Campbelltown, for the run to Canberra. https://en.wikipedia.org/wiki/British_Rail_Class_802

NSW is already procuring bi-mode trains as part of its fleet that will include replacement of those running in to Canberra: https://www.transport.nsw.gov.au/projects/current-projects/regional-rail

They make zero saving from a time sense, and not great on efficiency either (as your lumping around both a diesel engine plus overhead wire equipment), but an obvious solution at this point, because a fully electrified line just won’t happen unless there is a move to a dedicated high speed rail solution.

You are right about track upgrades, but the problem is the cost is not modest to achieve even reasonable upgrades – mainly because not only would it need major realignment at this end (in particular between Goulburn and Canberra), but also extensive work in Sydney itself to either build a dedicated corridor, or to free up high speed capacity on the existing network.

Both the NSW and ACT Governments have committed to working towards faster rail, but I wouldn’t hold breath on how quickly that might be delivered. I think the target should be a 2.5 hour trave time.

As for station location, only way it’ll ever be in the city centre is if a high speed rail network for the whole east coast was to be built – and even if it was, good chance they’d end up sticking the Canberra station at the Airport.