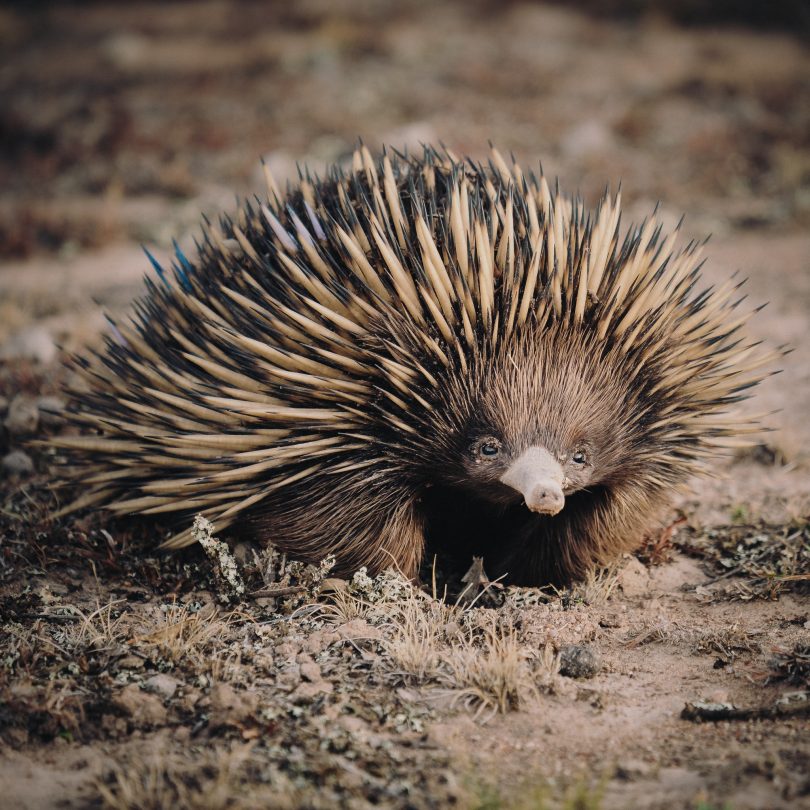 Echidnas are one of the most frequently spotted inhabitants of Mulligan’s Flat. Photo: Richie Southerton.

They’re known as the ‘Humans of Mulligans Flat’, and like their very distant cousins in New York, the vast protected land mass on the edge of Canberra’s new suburbs is providing sanctuary in the toughest of times.

During Canberra’s first COVID-19 lockdown, in 2020, rangers at Mulligans Flat Woodland Sanctuary, a 1200-hectare site in Canberra’s northeast, noticed an increase in visitor numbers, with many more walkers seen in the area. Because Mulligans Flat is so accessible, it became a haven not only for the rare wildlife it protects, but for the people of the nation’s capital affected by the lockdown.

This connection inspired Mulligans Flat community engagement manager Lauren Brown to come up with the concept of ‘Humans of Mulligans Flat’. Her idea? Conservation. One human at a time.

“In New York, their idea was to show off the diverse range of people who live and work there,” she says. “I could see a parallel here with our visitors because they are so diverse. The people who come here – and they seem to be increasing these days – do so for such different reasons. These people are creative, interested in science or just in their community. But what they have in common is they see Mulligans Flat as a sanctuary.

“Through the Humans idea, we want to show the range of people who come through here, from those who just live nearby and visit here for peace and quiet, to others who may have more specific reasons, such as wanting to study some of the wildlife. 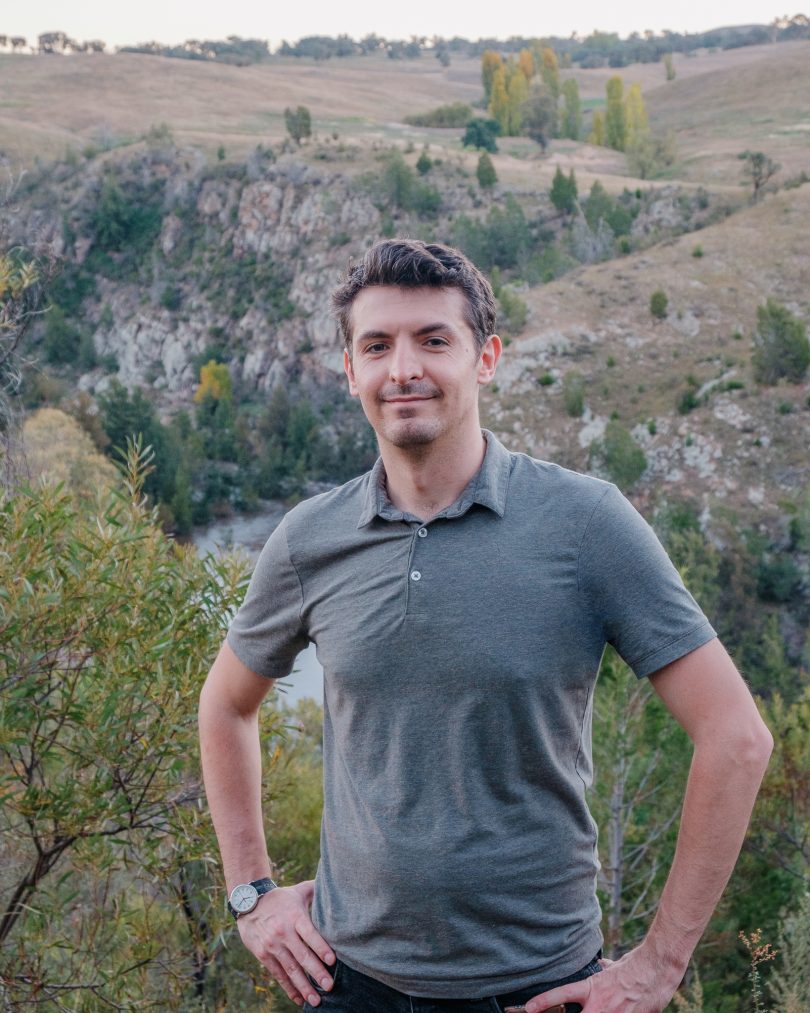 “It’s become obvious that more people are seeing it as such an important place in the community.”

One such ‘Human’ is Richie Southerton, who is doing an internship at Mulligans Flat Woodland Sanctuary, and using his camera to show the world the area’s uniqueness and beauty.

Richie, who is also doing a Master’s in science communication at the Australian National University, describes the Mulligans Flat-Goorooyaroo Woodland nature reserve as like an oasis in the centre of the city.

“The project at Mulligans is special to me because I love the idea of re-wilding and restoring our local nature reserves,” he says. “I’m excited to see how it progresses, and hopefully it eventually resembles the Canberra area as it was before European settlement.

“I also appreciate the cutting-edge science going on here, and how it will contribute to helping the restoration and protection of similar woodland ecosystems across the ACT and the rest of Australia.”

It also looks good from behind a camera lens.

“With woodlands, hilly viewpoints, natural grasslands and even the big wetlands on the dam, there’s a huge canvas to work with here,” says Richie.

Mulligans Flat is special for a number of reasons. There’s its inhabitants such as echidnas, turtles and bettongs, and also its unique setting as one of the largest box gum grassy woodlands in Australia. The fact it is located on the edge of a major city, surrounded by some of Canberra’s newest suburbs, also makes it incredibly unique. 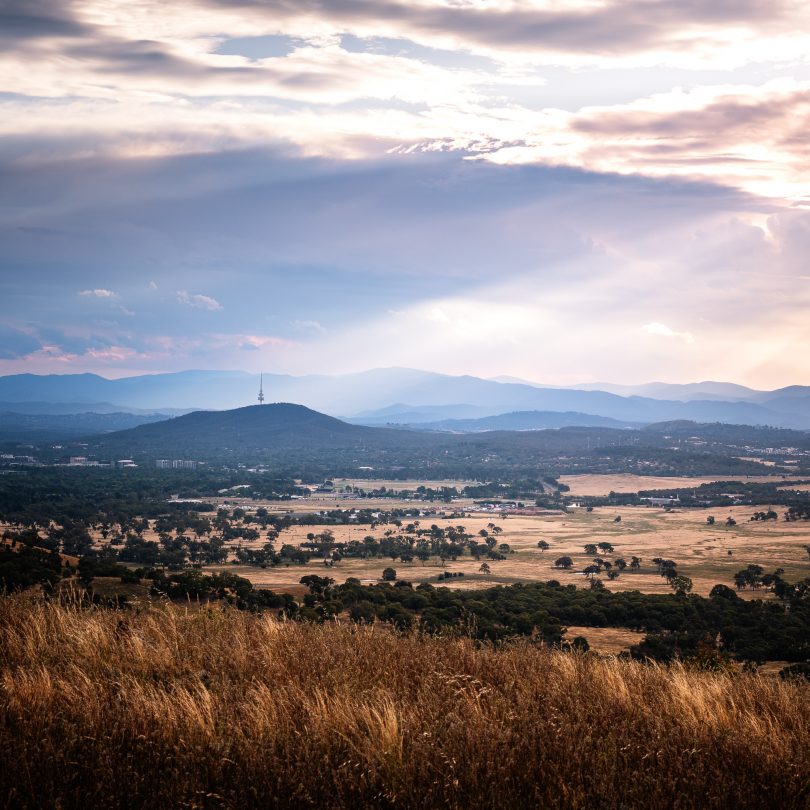 The view from Mulligans Flat towards the centre of Canberra. Photo: Richie Southerton.

“I know if I visit Mulligans at certain times of the year, I’m practically guaranteed a sighting of an echidna, my favourite animal,” says Richie.

With the installation of a predator-proof fence, Mulligans Flat has become the safest of havens for wildlife with regular reintroductions of species complementing the current inhabitants and allowing all to safely thrive.

It started with the successful reintroduction of the eastern bettong in 2012, followed by the bush stone-curlew in 2o14, and the eastern quoll in 2016.

Lauren says she is keen to hear from other ‘humans’ who have a connection with Mulligans Flat, especially people who find sanctuary in the area and who live in the adjacent suburbs of Forde and Throsby. 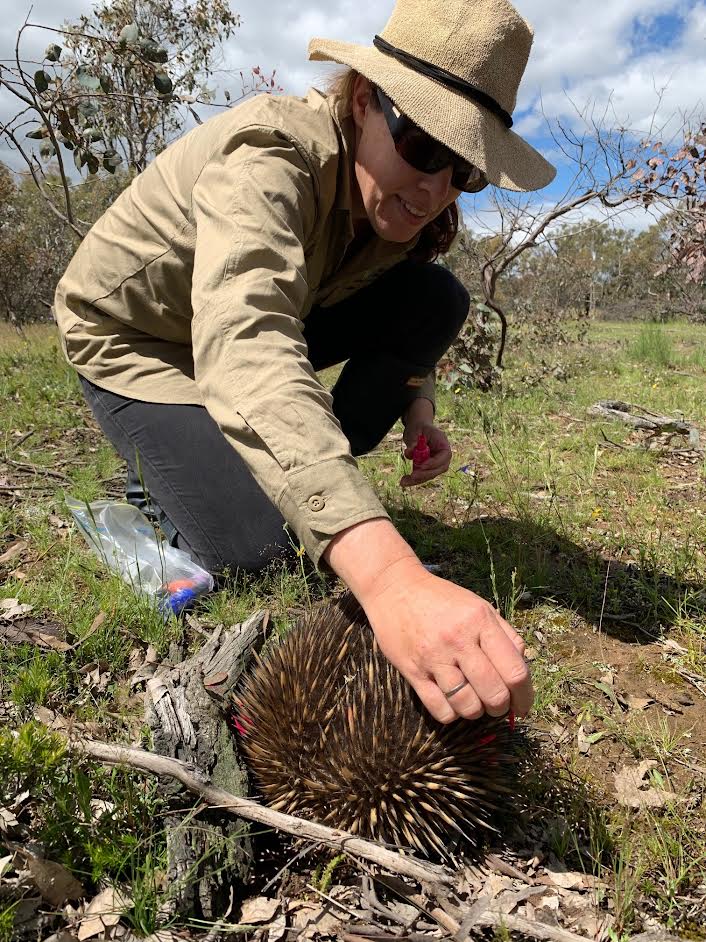 Work is well underway on the next stage for Mulligan’s Flat – construction of the visitors’ centre, named by the community as ‘WILDBARK’. It was scheduled for opening in October 2021, but may be delayed until the end of the year because of the COVID-19 lockdown.

The centre, built adjacent to the sanctuary’s fence lines, will also have a cafe, education centre and bettong enclosure. Once open, it will host regular nightly encounters with some of its favourite residents, including lizards, turtles and echidnas.

It is a lovely place for an easy walk! IF you leave out the hills at the NthEastern end.

I hear they’re prickly to deal with 😏

Stuart for the girls 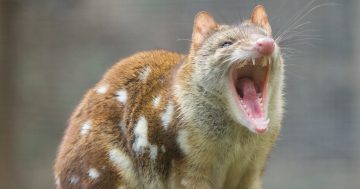