Push to separate walkers and cyclists on busy lake paths 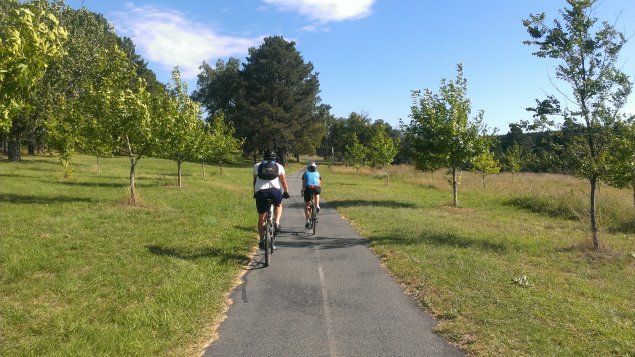 The ACT’s cycling lobby group wants to separate pedestrians and cyclists on the busiest sections of the shared paths around the lakes, and has also called on the Government to build separated cycleways down Northbourne Avenue, Yarra Glen and Adelaide Avenue.

In its 2019 Budget submission, Pedal Power ACT has called the Government to fund at least two trial projects that would provide separate paths to ease safety concerns on the increasingly crowded and fractious lake routes.

Walkers regularly complain about speeding cyclists on the paths, while cyclists argue many walkers do not heed warning calls or keep to the left.

Pedal Power says that if successful, the project could be replicated at other lake sites.

It also nominates the eastern side from the northern end of Lake Tuggeranong to the pedestrian bridge at South Quay.

“With the increased popularity of these routes, particularly on weekends, conflict between cycling and walking has become a safety issue that must be addressed,” says Pedal Power.

Pedal Power is also keen to see cyclists and vehicles separated by more than just a white line on major roads with fast-moving traffic, calling for separated cycle paths on both sides of Northbourne Avenue in line with the City and Gateway Urban Design Framework.

On Yarra Glen and Adelaide Avenue, it wants separated cycleways within the road corridor on both sides.

“A safe cycling and walking environment is an essential element in increasing the take-up of active travel, particularly for women and children,” says Pedal Power.

“The perceived, actual and potential conflict that arises between people on shared paths as well as on roads reflects a range of factors, including differing speeds and the current design of the infrastructure itself.

“Ultimately, the key to reducing conflict is to plan and design facilities to meet the needs of all people who use them and to fund programs which achieve behaviour change.”

The push for separated cycleways is part of its capital works pitch that includes ‘missing links’ such as a bridge and path to connect the Molonglo network at Coombs to the Molonglo River path, and Stage I of the Molonglo to the City Bikeway.

“If done well, these corridors could be a best practice example of providing a safe and efficient route, especially for people who would feel uncomfortable on Northbourne Avenue,” says Pedal Power.

“The low-speed active travel street approach can be achieved at low cost. Pedal Power ACT sees strong value in trialling active travel streets both east and west of Northbourne Avenue. If these
trials are successful, the program could be rolled out into other suburbs.”

Boy! Didn’t this bring out some strong opinions. Too many anonymous comments here to not think that some people just reply for a bit of a stir?

So on one hand cyclists have the opinion that car drivers have no right to be in a hurry and should be willing to slow down if cyclists obstruct them, including when there isn’t the legal minimum passing space. They state that bikes are vehicles too and have just as much right to the road.

On the other hand they complain about pedestrians slowing them down. How dare those pesky pedestrians impede the important cyclists from getting to their destinations as fast as possible.

Apparently cyclist is a synonym for hypocrite.

The section from Kings Avenue to Bowen Park is ridiculously narrow for such as well used route. With a little imagination a boardwalk (not concrete) could help provide a safe space for pedestrians.

Bring in the 1 metre rule for passing pedrestians.

They should ride behind them until such time it is safe to pass.

Only last year Pedal Power was lobbying for a presumption of wrongdoing against motorists in the event of a car v bike accident. The rationale is that the car is far more capable of inflicting damage and this increased liability would have a calming effect among motorists.

I assume that Pedal Power is in favour of a similar law in the event of cyclist v pedestrian accidents. Of course, this time it would be the cyclist who would be presumed liable. Anyone from Pedal Power care to comment?

This aggressive cycling lobby group are clearly hypocrites. In the past they demanded that we share the roads and footpaths with them but now they want it all.

I don’t know why they want their own path as most cyclists choose the road even though there is a purpose built cycle/pedestrian path running parallel to the road.

I often use the ped/cycle paths for walking and despite staying to the left. On numerous occasions, I have nearly been cleaned up by cyclist who do not use their bell when about to pass.

So, they want to complain about drivers on the road because they can’t stay inside a cycle lane, and now pedestrians on the path allegedly not keeping left.

There seems to be a common denominator here in the danger around lycra warriors…..

Simone Moss - 2 minutes ago
Sarah Moss,maybe you need some alpacas 🦙 View
Lucy Coote - 1 hour ago
Tom Gilbert uhhhhh I mean at least we wouldn’t have to mow the grass… View
Amanda Robyn - 1 hour ago
Suzanne Feeney. See. Alpacas is what you need. 😉 View
Sport 5

Peter Ball - 4 hours ago
Gai Wil - So given that logic, a 5 kmh limit would be OK with you yeah? I mean, as you stated if you don’t speed (regardles... View
Peter Ball - 4 hours ago
At least I feel safer now, when crossing the road while updating my FB profile. 😜 Before the new limits, it was like Russi... View
Greg Myat - 5 hours ago
Oh damn! Can’t speed there now because of a pesky camera! 🧐 View
Community 1

@The_RiotACT @The_RiotACT
Sally Hopman reckons there's no need to #write yourself off if you are struggling with #computers. Just pick up the heaviest thing handy - ancient Remington #typewriters are always good - and take aim at the laptop https://t.co/5SoyRLLAhU (18 minutes ago)