The owners of the Canberra Centre have unveiled plans for a much smaller development on Section 96 in the city that nonetheless includes five towers on a single-storey podium.

Queensland Investment Corporation is preparing to lodge an application to amend its previously approved development application for the site, currently a surface car park and the source of some angst over the amount of time it has lain idle.

The state-owned investment company has been criticised for taking so long to develop the prime site bound by Cooyong Street, Scotts Crossing, Narellan Street and Genge Street, leading to accusations of ‘land banking’.

QIC flagged that it would be scaling back its approved 2017 proposal last year when it lodged new plans for a three-level basement car park instead of five. 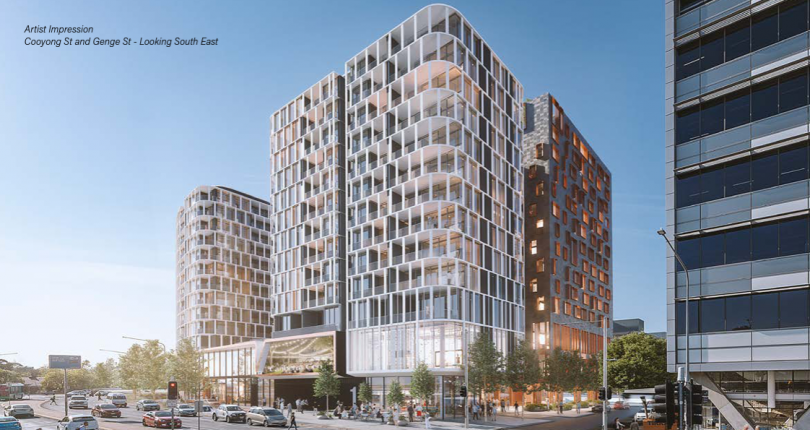 At the time it said the above-ground development would be about 10,685 square metres less than the currently approved DA.

The 2017 proposal was for a 10-storey office tower, a 12-storey hotel tower and 12-storeys of apartments.

QIC foreshadowed an amended DA that would include a mix of retail and office space, a boutique hotel, commercial services and a retirement living complex on the site, with building heights remaining about the same as before.

The new plans do not mention retirement living or office space. They retain the shops, services, hotel, and serviced apartments, and add a landscaped open spaces complex.

QIC says the development will be a new vibrant pedestrian-focused city precinct.

They also include closure of Scotts Crossing and Narellan Street to through-traffic to create a larger landscaped pedestrian precinct.

It also says there will be boutique retailing at ground level with an emphasis on market-style food and a new piazza and landscaped pedestrian spaces along Narellan Street, Scotts Crossing and Cooyong Street.

The development will create a new vibrant pedestrian-focused city precinct, and will support other businesses in the local area, Purdon says. 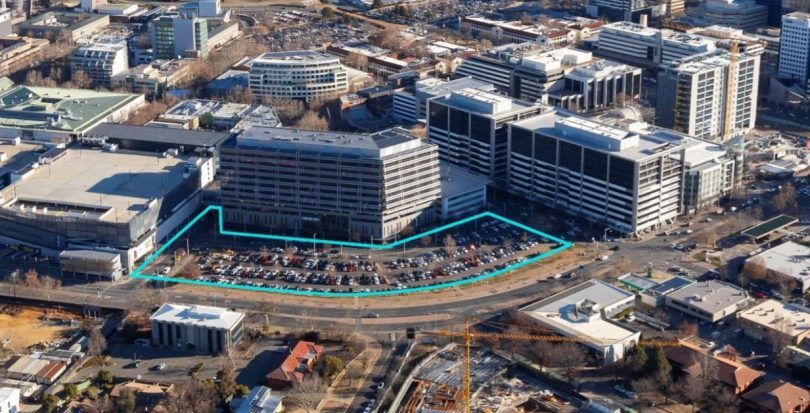 Section 96 is currently a car park.

Last year QIC said it still planned to construct a slip lane on Cooyong Street between Scotts Crossing and Genge Street, and an access ramp to existing car parks in Scotts Crossing, which would be be ‘pedestrianised’ between Cooyong and Bunda Streets. New traffic lights were planned for the intersection of Cooyong and Torrens streets.

It said the number of spaces in the basement car park, with access via Cooyong and Narellan Streets, would be 713, instead of 1118, plus bicycle and motorbike spaces, although QIC said that it had built 197 spaces on Section 97 in 2012 and there would be excess parking within the Canberra Centre.

Last year QIC said changes in the struggling retail industry and the residential and office markets had prompted it to revise its plans, but the deteriorating economy during the COVID-19 crisis may have forced it to make further changes.

The proposed development will be considered by the National Capital Design Review Panel before going to the planning authority.

A fly-through video of the proposed development has been prepared.

Is that 5 towers of apartments?

How dreadful! Turning the place into cold windy canyon city

Yet another wind corridor.

Any approval should be contingent on 20% affordable housing for older people and key workers.

Robert McMahon not in the city.

Robert McMahon good idea but no chance of it happening.

Robert McMahon no one would build it

Gregg Heldon I think they had *some* success with it in Sydney and Melbourne.

No sun, towering buildings and a east/west wind tunnel. Cooying Street isn't exactly an attractive view from an outdoor area. I dont think I'll be visiting.

QIC already control something like 10% of the retail space in the city, and commercial tenants can't be found for much of it.

This will just increase the amount they control and further pull shoppers and value away from the City Walk and Garema Place area.

The land was sold with an understanding that it would bring permanent residents in to activate the economy in the existing city properties, not steal traffic from them.

Sad, bad decisions & more disappointed about my home.... The bush capital turning into a concrete jungle

Aesthetics & I've grown up here. This is a negative change in the name of progress.

Next Canberra will be looking more like overdeveloped cities in USA

Nobody likes too much wind

Fabio Fabbo I'm not sure a concrete carpark is overly appealing to the eyes & I've grown up here. Do you often stand at Cooyong Street looking at the concrete carpark in admiration and think "beautiful, I'm in Canberra and not the USA".

It is clear you are against multi level development but are for the preservation of open space. Your positions conflict with each other. If we don't increase density, and I'd think the CBD is the right place for that, we will require more land to achieve the same result.

Where you live was once open space.

Michael Axelsen there is giant park over a purpose built pedestrian bridge 5-10minutes walk... Commonwealth Park. Then Glebe Park, Veterans Park, Haig Park and if you're brave enough you can venture up to City Hill. There are smaller pockets of green space along Ainslie Ave and around Marcus Clark St. If you feel like a longer trek, Mt Ainslie reserve is around 20-25mins walk.

Thanks Michael AxAxelsen and Brent Hutch

So you prefer instead farm land and bushland bulldozed.

Is it going to provide housing for the homeless?

Petra Solazzini what a simplistic observation of homelessness.

Elroy Jones thank you for your kind comment. It warms my heart to think that a complete stranger wishes to engage in a constructive exchange. 🤗

A wonderful development for people within walking distance.

Looks terrific! The piazza area is so much better than more internal mall. Hopefully the NIMY’s don’t hold much sway and it’s developed as promised

👆this fake profile from the developers marketing agency is next level funny.

Dan Hawcroft Ha!!! just here to keep Canberra’s massive sooks re growth, in check. You didn’t reply to my first question BTW.. not other suggestions?

Great! More reasons not to go near Civic!

Eddie Xia - 3 hours ago
Those trees are not that extremely danger at all. Otherwise it should be long gone when flooding and bushfires were there. View
What's On 6

Marga Varea - 3 hours ago
Nice article! Hope many people will be able to watch the film on Friday! View
Community 11

Bek Clark - 5 hours ago
Yeah, like the highways leading from coal mines to port. Fun times. View
Robyn Holder - 6 hours ago
So many they are struggling to keep up esp when some weeks it hardly stops raining. You can't fix them wet. View
Mike l'Pirate - 8 hours ago
Nada Krstin the big issue is it generates a vast difference in vehicle speeds between 20 and 60kph. Differences in speed and... View
News 7

TimboinOz - 7 hours ago
Wowww! What a lovely story.... View
Community 4

George Watling - 8 hours ago
I have serious doubts about this micro-forest method. Lots of claims are being made about its benefits but there is no scient... View
Business 1

Capital Retro - 8 hours ago
What are the tax implications of these schemes? They are being marketed as commercial in spirit to deal directly with distrib... View
Community 29

nickwest - 9 hours ago
I'm not sure about the politics but the rates increase is supposed to eventually replace stamp duty. The idea is to reduce to... View
News 11

@The_RiotACT @The_RiotACT
When Pansto the rakali was recently discovered in Queanbeyan, he had significant health issues, but now he's been nursed back to health by Wildcare volunteers and released into the wild https://t.co/wL38Yz9hAG (7 hours ago)

@The_RiotACT @The_RiotACT
Symphonies, country music, ceramics - there really is something for everyone this week. As always, check ahead before you go https://t.co/5ZSYZ1CzVr (8 hours ago)

@The_RiotACT @The_RiotACT
Planning Minister Mick Gentleman has stepped in to approve the Canberra Hospital expansion, but both the @CanberraLibs and @GreensACT have slammed the decision https://t.co/Y0hrUZoUE0 (10 hours ago)