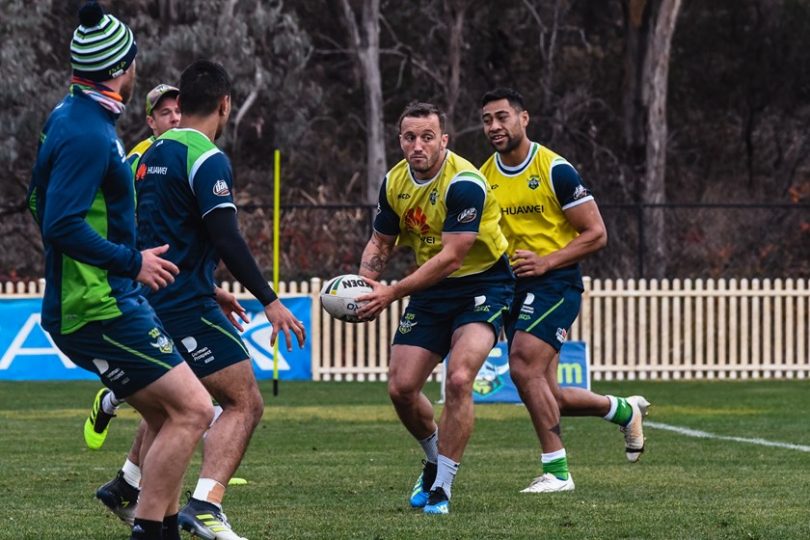 Josh Hodgson denies he will be the Raiders ‘saviour’ as he makes his return from a torn ACL. Photo: Supplied by Canberra Raiders.

Canberra Raiders hooker Josh Hodgson has announced that his knee is ready for a return to the NRL on Sunday afternoon when he runs onto the field for the first time in seven months.

The England international has been recovering from a torn ACL suffered during the World Cup last year but has been thrown straight back into the starting lineup for the Raiders’ clash with the West Tigers as the Green Machine look to keep their season alive.

The return of Hodgson comes at a vital time for the Raiders who are trying to avoid missing finals for the second consecutive season. The Canberra side sits in 10th position on the ladder with a 5-8 record and has a season-defining three matches away from home.

But Hodgson said he wasn’t rushed back by the club in a time of need and denied he is the ‘saviour’ to the Raiders’ season.

“I think we are still in a position to make the finals, I think it’s that tight this year,” Hodgson said.

“It is frustrating to say, but we’ve lost a lot of tight games over the years, but the one positive thing you can take out of them is we’re always in them. It’s better to be in those tight games rather than getting flogged by 30 every week.

“It is about us fine-tuning our game plan a little and we’ve always got the confidence in ourselves we can make the finals. It is definitely not out of reach and we just need to find our straps a little bit.”

Hodgson said he was 100 per cent confident there was no risk in making his return just seven months after tearing his ACL in December.

“If there was a doubt, I wouldn’t be playing. I told myself that if I am second-guessing myself, I won’t be playing,” he said.

“I’ve been in full-contact training for a good four or five weeks now and I saw the surgeon at six months and he was happy with everything. This weekend will be seven months and that’s usually when the surgeon will say it is a safe point to go back and play.

“I’ve been itching to play for a few weeks but it’s one of those things, you don’t want to risk being out for another season, so I just had to play it safe.

“It has been a long road with its ups and downs as it is with rehab and injury and things like that and especially when we are not going so good it is a lot harder to sit and watch but I am really excited for this weekend.”