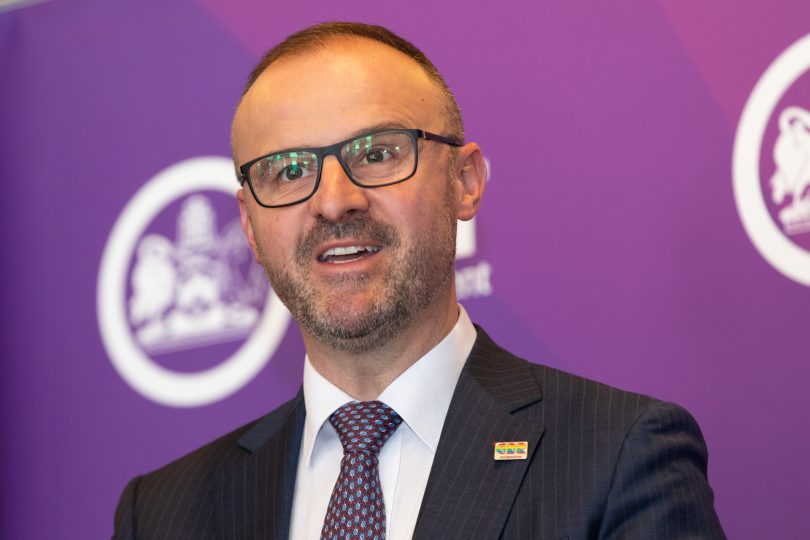 Chief Minister Andrew Barr: “This won’t fix itself and it does require the active intervention of government”. Photo: Michelle Kroll.

The ACT’s budget deficit has blown out to a record level and will hit a peak in 2020-21 of more than $900 million as the government spends up big to counter the impacts of the COVID-19 pandemic on the economy.

The government has released a budget update dripping with red ink but says that without the extra spending and concessions to stimulate the economy the situation in the Territory would be much worse.

”It would mean a deeper recession, it would mean deeper budget deficits over a longer period of time, a lot of misery and unemployment and a longer and slower path to recovery,” Chief Minister and Treasurer Andrew Barr said.

“This won’t fix itself and it does require the active intervention of government.”

Driving this is the government’s $4.9 billion infrastructure program over four years which Mr Barr says will deliver a pipeline of work to the construction industry and create hundreds of jobs.

Asked whether the government would call in some projects if they faced too many delays, Mr Barr said those powers were rarely used but he would not rule the action out, given the public benefit involved.

He said the ACT public should not be alarmed at a budget deficit approaching a billion dollars.

”If the Commonwealth Government can run a $185 billion deficit then it is entirely appropriate for the ACT Government to be in deficit at this time,” he said.

Mr Barr said the government still had plenty of shots in the locker if the economy need more stimulus, citing the ACT’s AAA credit rating, strong balance sheet, and the RBA’s intervention to ensure money could be borrowed at record low interest rates for at least the next three years.

The government’s budget strategy mirrors that of other jurisdictions and the Commonwealth to keep businesses afloat, create jobs and support people affected by the restrictions to contain the pandemic.

Nonetheless the numbers are not pretty, and blow last year’s pre-pandemic estimates out of the water into irrelevance.

The deficit has more than doubled from the mid-year review figure of $255 million to $690.5 million, and is expected to hit $909.5 million next year before tapering to about $400 million in 2023-24 under Treasury’s baseline scenario, in which social distancing is eased and international borders reopen by July 2021, borders with NSW and Victoria remain closed but freight is allowed through, and population growth slows due to a cut in migration.

Revenue is down everywhere with the GST payments shrinking by $974.3 million over four years along with the national economy, and land sale contributions falling short by $483.9 million.

Tax revenue is also expected to decline by $412.2 million over four years as a result of COVID-19 impacts on economic activity.

Housing has been resilient and will benefit further from an easing of restrictions, supported by record low interest rates, and ACT and Commonwealth government stimulus programs, although lower population growth will be a dampener.

”The magnitude of the current fiscal shock is easily the most significant faced in the Territory’s history,” the budget update says.

”The outlook for investment returns continues to be challenging, with increasing economic uncertainty and financial market volatility amid the COVID-19 pandemic.”

Insanely dangerous bushfires, massive hailstorm and COVID. Honestly, it’s amazing we have this small a deficit.

The ACT govt should be given credit where it’s due.

Going into debt to stimulate the economy in these low interest rate times makes sense. What needs to investigated is that the projects funded deliver the greatest benefit to the community. The Barr government has shown little interest in responding to community concerns about why light rail is a priority when there are massive unmet needs in health, education, social housing,particularly when bus rapid transport could meet the transport need at probably a far lower cost. Mr Barr start basing your priorities on evidence.

”If the Commonwealth Government can run a $185 billion deficit then it is entirely appropriate for the ACT Government to be in deficit at this time,” Barr says. What arrogance. How will he pay it back? Raise rates? Oh boy, that means the next government will have to clean up the mess Barr leaves behind – massive debt.

Comforting to finally see funding sort of allocated for the high-level Molonglo bridge. But, by announcing the bridge as part of a pool of projects there is a high chance that delivery will be compromised by internal resource distribution tensions.

The Liberals must be glad they are not going to be elected and inherit this mess.

The Jurisdictional Comparison section of the Economic and Fiscal Update released today paints a grim picture of state and territory finances – particularly for the three smallest jurisdictions – but things aren’t much better for the others.

Sooner or later, there will need to be some serious re-jigging of federal-state finances and, perhaps, responsibilities because the current arrangements are not going to be viable for too much longer – which is probably yet another example of the virus catalysing a problem we’ve had for some time.

A mass of red figures all due to the bug ? The corona virus stakes are about to commence.
Any questions about deficits, past present and future , will be immediately referred to the virus impact. Some impact for sure , but …..

The previous number was a predicted deficit of $255million, Its now $690 million. Pretty much all of that degradation would be due to COVID.

The government should be held to account on its finances but that needs to be balanced with the realities of the wider Australian and Global economies at present.

Barr has not been able to deliver a budget even close to what’s been forecast in his entire time as CM or treasurer before that. It’s been one successive deficit after another. Each time he’s had an excuse. COVID is the latest. The fact is he’s hopeless with money.

I understand what you’re saying Chewy, but you have to remember we’re dealing with Barr, a man addicted to spending and with precious little taste for reducing spending when this is needed. The debt he’s run up may be affordable now but the pendulum inevitably will swing, we’ll still hold massive debt and it won’t be so affordable. What happens then? You can’t trust Barr to cut his cloth to the times when spending reductions are necessary. So how will he cover this debt? By imposing even more excessive rates, taxes and other charges on you and me, that’s how. Remember, Barr heads a tired old hubristic government that only knows how to “spend its way out of trouble”. If we wish to see a return to prudent budget management, we need real change come October.

Mysteryman,
Nowhere have I said the government has performed well in this regard. In fact I’ve been highly critical in many areas where I think they’ve failed miserably.

Although I will say that a lot of the variability in budget outcomes has occurred because they continue to include investment returns which fluctuate significantly each year. Obviously they like to take credit for this when returns are high but blame “economic conditions” when returns are low.

We should definitely focus on the specific items of waste that are in their control, but the overall figure this year and for the next few is going to be massively dictated to by the pandemic.

And the same goes at the Federal level, where we are going to see the biggest deficits ever delivered.

We can’t hide from what’s coming, we need to plan our way out to reduce the economic hits and recover as quickly as possible out the other side.

What state or territory isn’t spending out of trouble now? Even the Feds are spending to minimise the impact of COVID, by how many billion $$$$$.

Why would you think the ACT would or should be any different except your hatred of Barr. I would have no doubt if Coe were in power and was doing the same you would be gushing with praise.

Every state and territory as well as the federal government was carrying unsustainable debt pre-COVID 19. The double whammy of paying out more and collecting less post COVID 19 has at best exacerbated the problem and at worst crystalised the debt.

Australia it totally insolvent now and when we are borrowing money to pay interest on existing debt we are asking for our creditors to pull the rug out from under us.

Is anyone familiar with the way the Chinese enforce loan defaults?

We either do it tough now or lose everything tomorrow. No more borrowing, extra spending and concessions to stimulate an economy that has already failed.