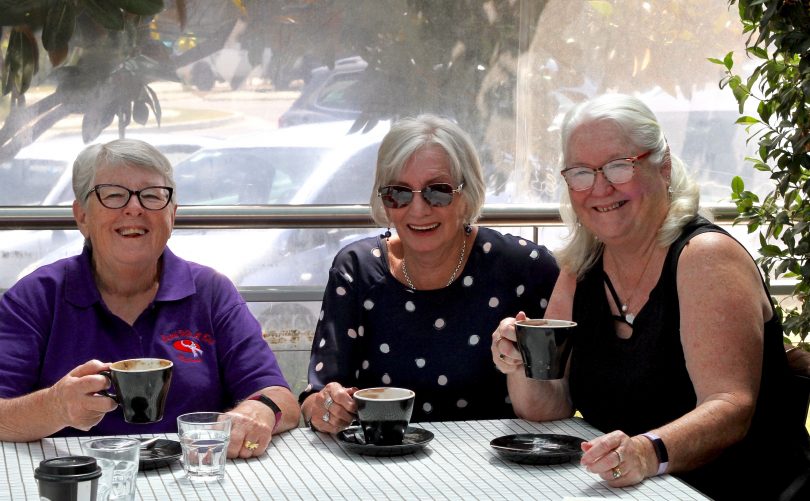 Such is the sisterhood of a sassy group of women known as the Red Hatters that when you reach 80 years of age, you are given an honourary OBE (also known as ‘over bloody eighty’).

While members sip hot chocolates and coffees at a local café, Queen of the Canberra Red Hatters Judy Black tells how she is also known as the Queen of Bubbles, while her so-called sisters with a twist, Vice-Queen Barb Bennett is the Countess of Coombs and Anne Webster is Aristocratic Anne. Anne is also a member of the Council of Hats, but we’ll get to that bit later.

Their soirees involve red hats with a splash of purple. And bling. Lots of bling!

Judy says there is no agenda to the Red Hatters other than you must be female and over 50. Being seen and heard comes with the territory.

“When you get to a certain age, you become invisible. You become a little less confident out in society and you tend to feel that people don’t value your words or your opinions,” proclaims Judy.

“So this group is for women to go out, have fun and support each other and be very visible and valuable again.” 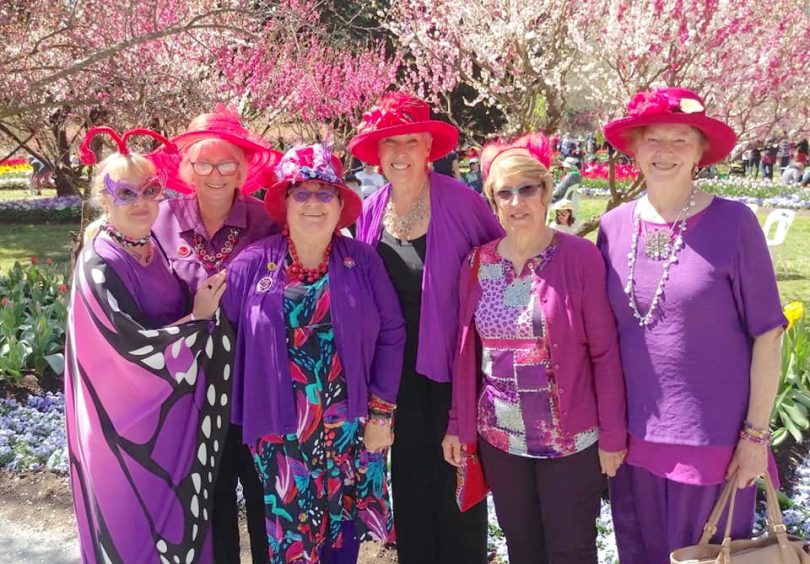 A group of the Red Hatters being visible during a recent outing at Tulip Tops garden. Photo: Supplied.

The Red Hat revolution began in America in 1997 when its founder purchased a red hat and decided to wear it with purple because the two colours don’t match, but unlike blue and green, should be seen.

The Red Hat Society membership exploded through word of mouth and grew from two chapters in 1999 to more than 40,000 chapters worldwide within five years.

The Canberra Red Hatters this week celebrated their 16th anniversary with a typically red and purple gathering, attended by most of the 62 members and the Council of the Hats, also known as the Red Hat committee.

The group’s affinity to being comfortable and confident takes precedence over conversations about gender equality or being single, which is occasionally trumped by US politics.

“The most important thing is that we are connected,” says Barb. “This group belongs to me but it is a part of us all.”

Judy takes a second to steer the conversation to a serious topic.

“Because of the age of us and the number of us, it’s normal and natural for us to be going through health issues, and some of these issues can be life-threatening.

“You can almost guarantee that someone else in the group has gone through the same thing.

“One of our ladies was going through cancer treatment and her hair was going to fall out. Anne here has experience with this so she offered to shave her head and provide some much-needed friendship and say, ‘yes, I’m with you’ instead of going to a hairdresser to get it done.”

There has also been a ripple effect. Many of the Red Hatters’ husbands have connected too and provide encouragement – not that the women need it.

“We take people from the community who feel like they aren’t belonging and give them a community to belong to. We’re not like the View Club or any others because we are purely about the social connections,” says Judy.

“Also, it’s great fun to go shopping because we’ve got to find our red hats and our purple clothes and our bling.”

You can find out more about the Canberra Red Hatters by emailing sisterswithatwistqueen@gmail.com or checking them out on Red Hatters Canberra sisters with a twist Facebook page.

How do you become a Red Hatter in Canberra?

Judith Winter Hi Judith, if you head to their Facebook page tagged in the caption you will be able to contact the Red Hatters directly and find out more about their activities and meet ups.

What a great article! My Mum is a Red Hatter and she has so much fun too ❤❤

Barbara Bennett, I love how much enjoyment your ‘red hatters’ gives you’ 🎈💜❤️💜

Barbara Bennett…. you are a ⭐️